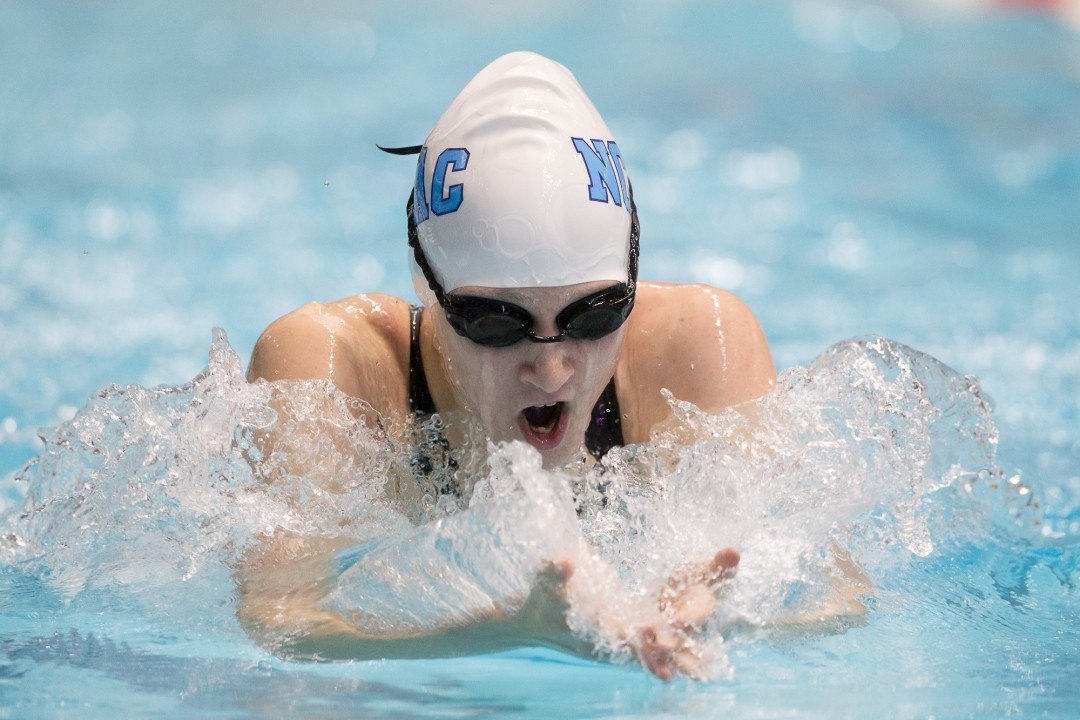 Madison Homovich has left quite an impression at the 2014 U.S. Junior National Championships, and now, at just 14 years old, she has a chance to win the meet's high-point honor. Archive photo via Tim Binning/TheSwimPictures.com

USA Swimming on Sunday morning, with one day of competition remaining, has released the individual point totals for the 2014 U.S. Junior National Swimming Championships.

So far, on the women’s side, 14-year old Madison Homovich from the North Carolina Aquatic Club is in the lead with 60 points, putting her well out in front of the Carmel Swim Club’s Veronica Burchill and Claire Adams for the honor.

Homovich is entered in the 200 IM and the 1500 free on the final day of competition, but is not seeded to score in the former of those events (not that this has stopped her all week). Burchill is scheduled to swim in the 50 free, where she’s the 16th seed, and Adams has entries in both the 200 IM and the 50 free left, but isn’t seeded to score in either.

Sierra Schmidt, Sonia Wang, and Amy Bilquist have 41, 41, and 40 points respectively, and while Schmidt and Wang are done with the meet, Bilquist might have the best chance at tying Homovich. That’s because she’s the top seed in the girls’ 50 free, and after her win in the 100 could hold that spot. If she wins the 50, and Homovich doesn’t score, then the two would tie for the honor.

Homovich, however, is the 3rd seed in the girls 1500 free, and history dictates that she should lock things up in that race.

On the boys’ side, Maxime Rooney has the lead with 64.50 points, but he’s done swimming for the meet individually. Townley Haas is 2nd at 60 points, and he has the 50 free – where he could very well pick up a few points. He would need to finish 12th or higher to surpass Rooney.

Haas also has an entry in the 1500 free where he is the 4th seed and could pull away for this honorary title.

Only two other swimmers have a chance at passing the idle Rooney. Patrick Mulcare is 3rd with 52 points, and is the #2 seed in the men’s 200 IM. He would need a 6th-place finish to pass Rooney for the honor, and based on how he has been swimming this week, that seems like a safe bet. Curtis Ogren is the top seed in the 200 IM, and he would need to win to pass Rooney as well.

The current top 10 in individual scoring so far, with age in parenthesis: