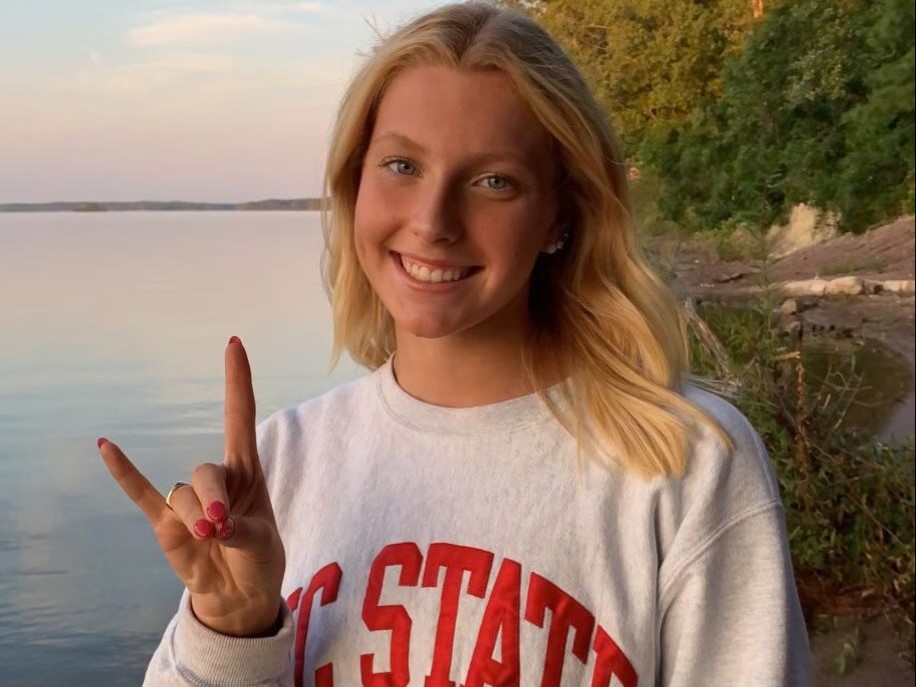 Keelan Cotter, ranked as a “Best of the Rest” recruit in SwimSwam’s high school class of 2023 rankings, has graduated high school early and enrolled at NC State for the spring semester in order to begin training with the team.

Cotter still won’t compete for the Wolfpack until fall 2023, however.

While the decision to finish high school early came last summer, the original plan was to use the free semester to train at home with her club team the TAC Titans. It wasn’t until November that a plan materialized to join the Wolfpack for the spring semester.

“I made the decision to graduate early over the summer with the intention of focusing on long course for the rest of the year before starting at NC State in August.” Cotter told SwimSwam. “However, when November came around the nc state coaches called me because admissions needed a statement on my plans for second semester since I wouldn’t be doing school, and that’s when the option came up to start training here early.”

Her older brother Michael is currently a freshman on the NC State men’s swimming & diving team, and while Keelan says that him being there “made the decision easier,” it “wasn’t a leading factor.”

She also noted the academic benefit of arriving early, taking a full course load in order to be able to train with the team. “It gives me a little bit more time to figure out what (academic path) I want to pursue,” she said.

Cotter attended Green Hope High School in Cary, North Carolina, which is only about a 25 minute drive from the NC State campus. She says that while she is living at NC State for the duration of the academic year, being close to home also made the decision easier.

Last year, she was the North Carolina High School 4A (big schools) State Champion in the 200 and 500 freestyles as the Fighting Falcons finished in 2nd place at the meet.

She plans to move back home in May, though she hasn’t decided yet if she will continue to train with NC State or the TAC Titans in the summer. Regardless of where she’s training, she plans to represent her home club the TAC Titans.

“I really look forward to training and competing with them again in the summer, and leaving the team environment at TAC definitely made this decision a hard one,” Cotter said, emphasizing that the decision shouldn’t be viewed as any sort of a negative against her club team.

The TAC Titans, led by head coach Bruce Marchionda, have recently qualified teenager Claire Curzan for the US Olympic Team and Charlotte Hook for the US National Team, among other successes.

As for things like prom, her last high school state meet, and other rite-of-passage finales to the formative scholastic years, Cotter says she doesn’t focus on those things.

“I don’t worry too much about regretting missing the end of my senior year,” Cotter said. “I’m focused on the next 4 years with NC State and haven’t really spent much time worrying about what I am missing by being here.”

I really like her energy to be with NC State but at the same time, you are a high schooler once, so you should take some time to enjoy yourself….college is a grind, seems like you are swimming well with Bruce, enjoy the last few months…

Most kids can’t wait to get out of high school these days…in many cases, it’s not a fun place to be. Security issues, discipline problems, drama with curriculum, etc. No thanks, I am moving onto college if I had the chance.

you can graduate early from high school?? huh??

Ivey did it for Cal and Tiltmann for UVA

I know a guy, not an athlete get accepted to Dartmouth and then graduate 1 trimester early. He just was done with all the requirements and didn’t want to do any more high school. He spent his time between hs and college as an assistant accountant . We also had another girl fulfill all her requirements and graduate 1 trimester into senior year but she was rather like keelan’s situation if I understand correctly.

Happens a ton in football. Perhaps you don’t see it as much in swimming because the high school season is in the winter for most of the country

Keelan is a great addition to the team! She will be amazing.!

Very focused on the next four at NC state. I like it!