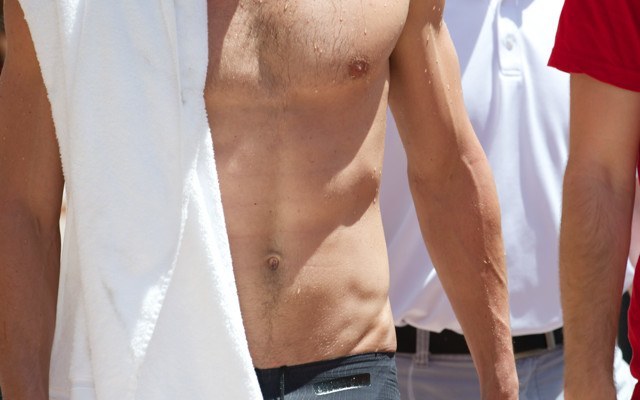 Michael Phelps is wearing an Arena brand suit at the 2014 Mesa Grand Prix, but you wouldn't know that on first glance. Current photo via Mike Lewis/Ola Vista Photography

After it was unveiled earlier this week that Michael Phelps and Speedo did not renew their sponsorship agreement at the end of 2013, he commented that he was a “free agent” for suit sponsorships in his pre-meet press conference.

There has been speculation about who he might endorse in the long term, be it an Under Armour line of competition swimwear, or going with one of the other established majors, but in the meantime, Phelps has to wear a suit. He has to swim in something, and with no indication that he’s started his own brand yet, a lot of fans were curious about who he might wear.

Well, for now he’s warming up in an Arena brief, with the Arena logo blacked out – no free rides on Phelps’ powerful hip – as the photo above snapped by Mike Lewis shows. During his race, however, he was wearing an all-black jammer of indiscriminate origin. It had the FINA approved logo on the back, but no other visibly discernible logo.

This harkens back to something we’ve seen in other sports quite frequently in the Olympics, where professional major-sport athletes like basketball players who have sponsorships with brands that aren’t the official sponsors of their Olympic gear have intentionally covered logos. Robert Griffin III was fined by the NFL for doing the same in 2012 on his uniform logo.

There is currently no rule against this in USA Swimming, as most USA Swimming uniform rules deal with logos being TOO big and TOO prominent, so don’t expect any of the same fines for Phelps.

for personal reasons, if UA comes out with a competitive swimsuit now… i’m going to be so pissed. lol could have used them back between 08-12

Thanks for the article! Definitely interesting to see him wearing something other than Speedo!

But then he wears a under amour shirt in the press conference?

His “dry land” is sponsored by under armour, so no surprise there.