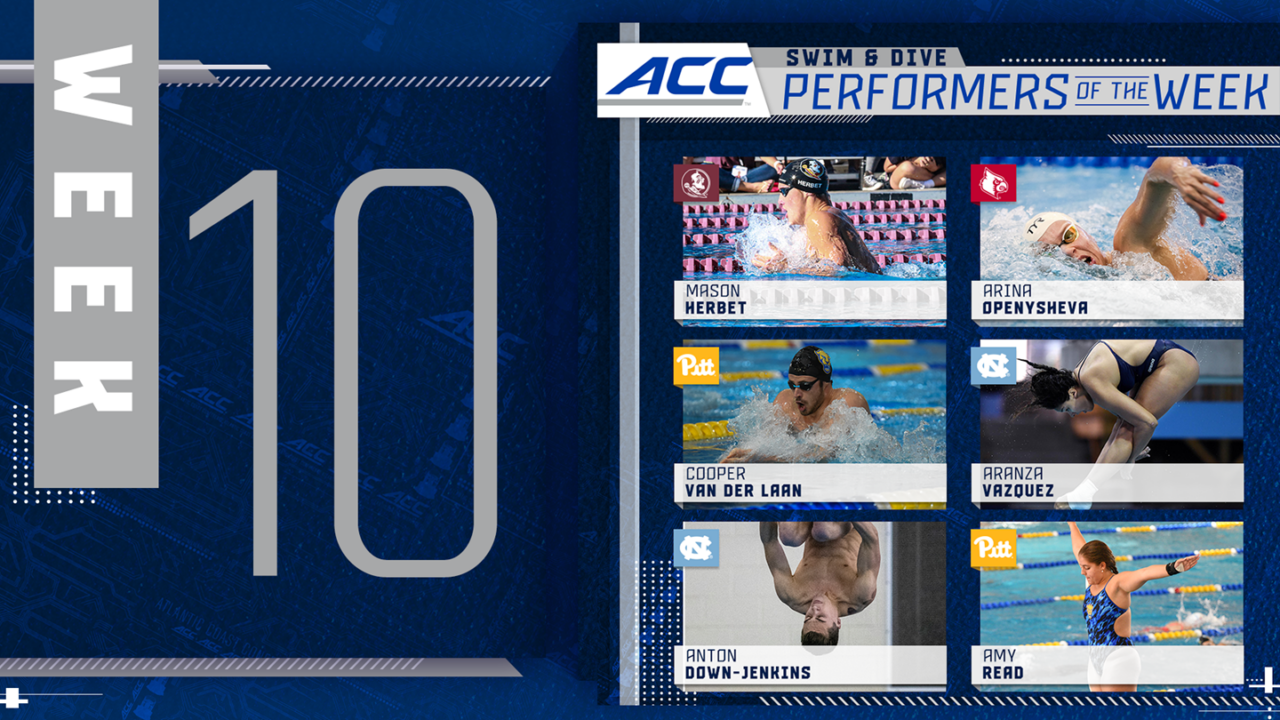 CO-ACC MEN’S SWIMMER OF THE WEEK
Mason Herbet, Florida State, So., Oviedo, Florida
Herbet swam three races and set new Morcom Aquatics Center pool records in all three events on Friday against Tampa. He swam a season-best 46.07 in the 100 backstroke, earning an NCAA B cut, while also setting a pool record. Herbet also competed in the 200 individual medley, winning easily with a time of 1:47.35, which was also another pool record. He participated in the 200 medley relay, which won and set a pool record of 1:25.88.

Cooper Van der Laan, Pitt, Sr., Gold Coast, Australia
Van der Laan earned two NCAA B cuts while competing in the Western Pennsylvania Invitational. He broke the Trees Pool record in the 100 breaststroke, winning in a time of 52.21. He captured the 200 breaststroke in 1:56.41, also notching a NCAA B cut time. Van der Laan also was a member of the winning 400 medley relay squad (3:12.25).

ACC MEN’S DIVER OF THE WEEK
Anton Down-Jenkins, North Carolina, Sr., Wellington, New Zealand
Jenkins swept the 1-meter and 3-meter springboard events for the sixth time in six meets this season. Competing against Duke, he scored 388.50 in the 1-meter competition and 407.40 in the 3-meter.

CO-ACC WOMEN’S DIVER OF THE WEEK
Aranza Vazquez, North Carolina, So., La Paz, Mexico
Vazquez won three of four events in a two-day span in meets against Duke and No. 2 Texas. On Saturday she won both springboard events, defeating Hailey Hernandez of Texas, who was ranked among the Top 2 in the 1-meter and 3-meter events, according to swimcloud.com. She scored 340.20 in the 1-meter and 374.40 in the 3-meter against Texas. Vazquez also placed first in the 3-meter (351.83) and second in the 1-meter (322.50) on Friday against Duke.

Amy Read, Pitt, Sr., Leeds, England
Read swept the diving events at the Western Pennsylvania Invitational, while earning a new personal best in all three competitions. She broke her own school record on platform with a score of 322.50. She also won the 1-meter (325.60) and 3-meter (353.40). Her 1-meter score was just two points shy of the school record.