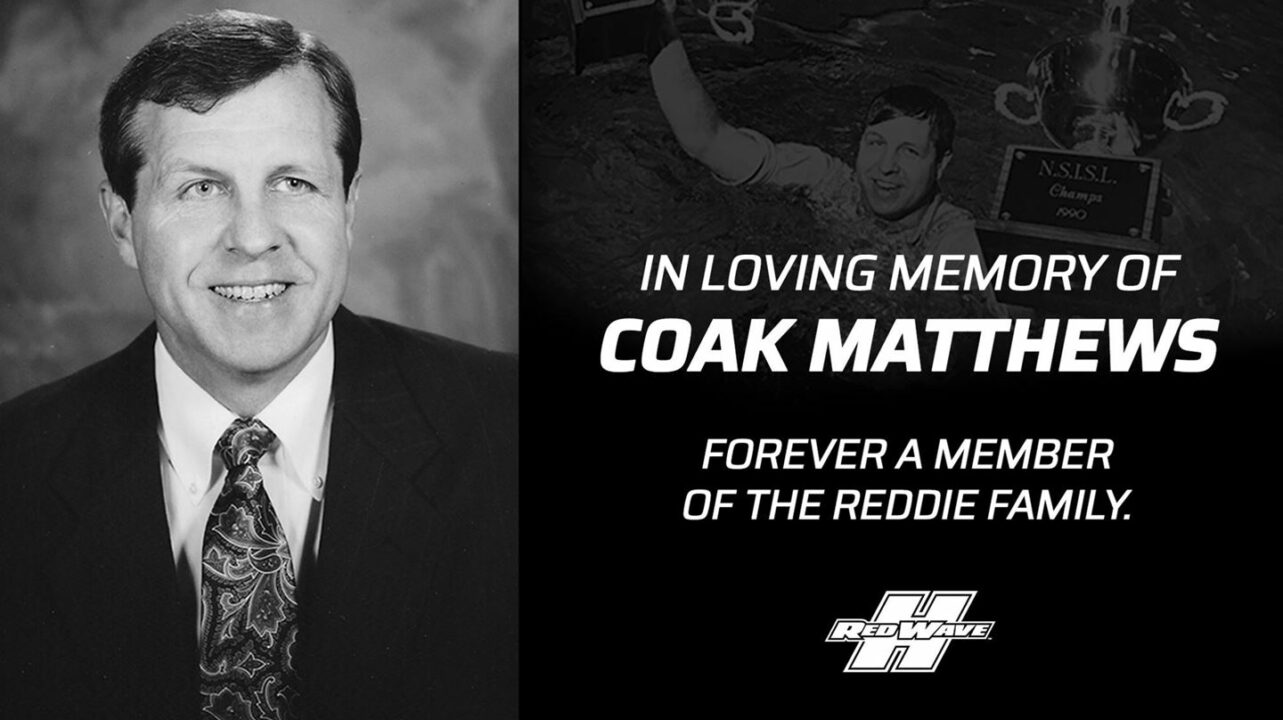 Matthews was one of the most decorated coaches in Henderson history and was at the helm of the Red Wave swimming and diving programs for 39 years. Current photo via Henderson State Athletics

“The ‘good’ races, the longer races, triathlons and such, were usually on Sundays. Coak always liked the longer Sunday races. He would start every race with Isaiah 40:31 and always had the song ‘Strength Will Rise’ playing on the phone. Today, surrounded by his loving wife Mary and their three children, Sallie, William, and Blanton, Coak finished his final race. Please keep the family in your thoughts and prayers while they grieve the loss of this very special man.” – Dr. Amanda Phillips, MD and Red Wave Alumna

ARKADELPHIA, Ark. — Henderson State Athletics and the Reddie family suffered a tremendous loss on Sunday when legendary former swimming and diving head coach Coak Matthews passed away at the age of 66.

Matthews was one of the most decorated coaches in Henderson history and was at the helm of the Red Wave swimming and diving programs for 39 years. He recently retired from full-time coaching in April and is survived by his wife of 36 years, Mary, and their three children, Sallie, William and Blanton.

“We are heartbroken and devastated for Mary, Blanton, William and Sallie at the tragic news today,” Director of Athletics Shawn Jones said. “Coak Matthews was and is a Reddie legend. His impact on the Henderson State campus, thousands of Red Wave student-athletes and this community is immeasurable. We encourage everyone in the Red Wave, Henderson and Arkadelphia communities to surround the Matthews family during this difficult time and help give back to the man who gave all of us so much of himself. Coak will be deeply missed, but his legacy will live on forever and will be felt for generations to come.”

A certified master level coach by the College Swimming Coaches Association, Matthews coached over 200 All-Americans, four individuals who won national championships and led both the men’s and women’s programs at Henderson State to numerous Top-10 national finishes at the NAIA and NCAA II levels of competition during his time at HSU. He was named the CSCAA National Diving Coach of the Year in 1990, the NAIA National Men’s Swimming and Diving Coach of the Year in 1994, was inducted into the Arkansas Swimming Hall of Fame in 1995 and the Henderson State Athletic Hall of Honor in 2003.

An icon of the sport in the state of Arkansas, Matthews’ impact exceeded far beyond the campus of Henderson State. In addition to his work at HSU, Matthews served as the swim coach at Arkadelphia High School from 1983 to 2005, where he led the Lady Badgers to state titles in 1986 and 1987. Outside of competition, Matthews dedicated much of his time to advancing the sport of swimming in Arkadelphia and the surrounding community. Throughout his career, Matthews taught and organized swimming lessons, summer All-Star clinics, and camps in Southwest Arkansas.

Funeral arrangements are pending and the information will be shared when it becomes available. The Henderson State Counseling Center is available for student-athletes and students.

Statement from Dr. Charles Welch, Arkansas State University System President and Former President of Henderson State University:
“Coak Matthews was a legend in every sense of the word, and his passing leaves a huge void in our university and in our lives. He always put his family and his student-athletes first, and his drive and commitment were unmatched. We were blessed by his service, and his legacy will continue to live on through the Red Wave swimming program and through his beautiful family.”

Statement from Dr. Jim Borsig, Chancellor of Henderson State University:
“On behalf of Henderson State University, I want to extend our heartfelt condolences to his wife Mary, their children and family, and to all who knew and loved Coak Matthews. He was a legendary coach of the Red Wave and he positively influenced the lives of countless Reddies. Coach Matthews was beloved by all who knew him and he loved this university. Above all, he loved his family. Please keep the Matthews family in your thoughts and prayers as they mourn the loss of a beloved husband and father.”

Statement from Scotty Serio, Head Coach of Red Wave Swimming and Diving:
“My heart is heavy with the news of Coach Matthews’ passing. Coak was an integral part of our community and will be a dearly missed mentor, confidant, and role model. We can’t express enough thanks and gratitude to the Matthews family for sharing such a great godly man with so many of us during a crucial time in our lives. There are no words to express our sorrow, but Coak’s legacy will live on in this program and will serve as a guiding example of what it means to be a part of this team and this community.”

Coak, you will be missed, but always remembered. I knew Coak as a caring husband and devoted father, blessed to have his family. Coak has left a legacy at HSU, DII Swimming and he contributed to the growth of so many student-athletes. Coak was a great role model for me as a young coach getting started in the early 90’s. Peace be with you my friend.

Thanks for the memories . My heart goes out to the family. Godspeed Coak 🥲

Coak was one of the nicest and most sincere coaches in our sport. He was as devoted to his family and cared tremendously for his athletes. Always kind and thoughtful, his will be missed but his impact will be felt for generations. Coak, thank you for the friendship and support over the years.

Coak was always so kind and caring. He was certainly one of the good guys and had a huge impact on so many. I hope he knew how much he meant to so many swimmers and younger coaches (including me) who were influenced by his presence on deck.

There was a terrific reunion last year where teams from Southwest Houston area gathered to celebrate. It was great to see Coak there and celebrate the sport of swimming. Rest in Peace my Friend.

Coak, thank you for taking a chance on a swimmer you had never seen from the other side of the world. Your guidance and help over my 4 years at Henderson profoundly changed my life and I am eternally grateful. I know you are at peace with your maker and that your faith always made you strong. My heart goes out to Mary and the children and hope they can find strength at this time.

Thank you my dear friend and mentor.

I am proud to call him a friend. Coached him in Houston and gave him his first coaching job. He was one of the really good guys.

Incredibly sad to hear about Coak’s passing. He was a mentor to many, and valued your growth as a person, rather just your growth as an athlete or coach that worked under him. I started my coaching career as a GA under Coak, fresh out of college, and definitely know I wouldn’t be where I’m at today without his guidance.