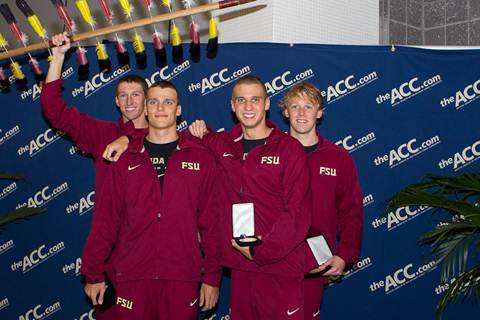 All swim meets have their ups and downs. This first night of the men’s ACC Championships, though, went to extreme highs, and extreme lows, leaving many in the stands shocked and uncertain of what they just saw.

The Florida State men came into the meet already with an ACC Record this season in the 200 free relay. With the mid-season addition of backstroker Pavel Sankovich, and an 18.90 anchor from Paul Murray, the Seminoles added a league mark in this 200 medley as well. Their 1:24.84 took down the mark set by Duke at NCAA’s last season in 1:25.98. Sankovich proved to be a key as he split 20.99 on the backstroke leg. That was not only the fastest of this field, but it’s faster than anybody split at NCAA’s last year. That’s the definition of an “instant-impact” from the Belarusian Olympian.

Virginia Tech took 2nd in 1:25.60, which was also under the old league record, including a 19.32 anchor from freshman Joe Bonk. That’s about as good as they could’ve hoped for him in year 1, so the Hokies will likely be satisfied with that position.

North Carolina took 3rd in 1:26.19, followed by North Carolina State (1:26.48) and Virginia (1:27.01). That’s actually a good placing for Virginia, who was 9th in this same event last season. Georgia Tech’s men finished 6th in this relay in 1:27.11; overall, they probably would’ve liked a better performance, but the 18.6 anchor for Andrew Kosic will hopefully rev them up a little for day 2.

One of the biggest individual event streaks in the country almost went down in this meet. Frankly, it should have gone down. Coming into this meet, Virginia hadn’t lost an 800 free relay at the ACC Championships since 1999.

With a gigantic last 50 yards, North Carolina State sophomore David Williams made up a full second deficit to overtake Virginia’s Parker Camp and touch the wall first. But that’s when things got weird. In excitement, a North Carolina State swimmer who had been an earlier leg on the race jumped back into the pool to embrace Williams. The problem is that Boston College in lane 1, 23 seconds behind the winners, had not finished the race. The result: a disqualification for the Wolf Pack, and the Virginia streak continued.

The Cavaliers’ ultimate winning time was 6:20.26 (NC State was 6:19.94 by the clock). That included a trio of under 1:35 splits for Virginia, with the fastest leadoff in the field going to Virginia’s Nick Alexiou in 1:34.80. That ranks him as the third-best freshman in the country this year, and sets him up to be possibly the next big star in a long line of Virginia middle-distance success.

Team Standings After Night 1
The official standings after 1 day has Florida State in the lead with Virginia close behind. Since we already know the outcome of diving (whose scores don’t get officially inserted until later in the meet), we’ve included those points below to give you a more complete picture of all known outcomes.

You should change the title from HEARTBREAKING DQ to STUPID DQ.

MR. Pike! Congrats from the River!