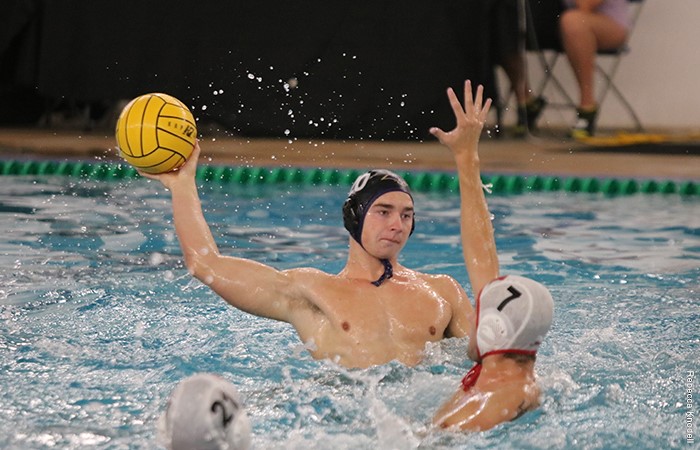 With 140 efforts of a hat trick or more and several stellar performance between the pipes, these players stood out as conference award winners. Current photo via McKendree Athletics

Along with the women’s quarters, the first leg of the eight-finals in the men’s Euro Cup contributes to the excitements of this LEN Water Polo Super Saturday.

With 140 efforts of a hat trick or more and several stellar performance between the pipes, here is a look at which players stood out in their individual conferences on men’s collegiate water polo Week 6.

Player of the Week: Marko Asic, Pepperdine – Scored a hat trick and added two assists in the Waves’ 13-12 overtime win over #6 Cal, the program’s first since 2008; added a goal in the 10-9 win over San Jose State.

Luke Waechter, La Salle – Tallied nine goals over three games, while also adding two assists, four exclusions earned and a block; notched a hat trick in a 16-7 loss to #15 George Washington, while also earning an exclusion and recording a block; put in a career-high six goals as the Explorers earned their first ever Division I win over Navy (10-8);

Matthew Haygood, McKendree – Put in 13 goals in three games for the Bearcats; tallied seven goals in a 19-15 loss to Gannon; added two scores in a 21-6 over Monmouth; notched four goals in a 19-8 win over Mercyhurst.

Defensive Player of the Week: Cole Strohson, La Salle – Drew 10 kickouts over three matches; scored one in a 16-7 loss to #15 George Washington; notched four exclusions earned, three steals, a block, an assist and a goal in the historic 10-8 win over Navy; drew four exclusions and added a goal and a block in a 12-11 loss to Johns Hopkins.

Player of the Week: Felix Brozyna-Vilim, UCLA – notched a hat trick and drew six exclusions in the Bruins’ 15-11 win over #5 UC Santa Barbara.

Newcomer of the Week: Tommy Gruwell, UCLA – notched two goals, two assists, two steals, one field block and a won a sprint in the Bruins’ 15-11 win over #5 UC Santa Barbara.

Player of the Week: Charlie Owens, Harvard – Scored six times in weekend wins vs. Brown and MIT; put in two goals in a 12-5 win over Brown; notched four goals in an 18-7 win over MIT.

Defensive Player of the Week: Billy Motherway, Princeton – Notched a career-high 17 saves in a 10-6 win over Iona

Offensive Player of the Week: Ethan Lewis, Claremont-Mudd-Scripps – Put in four goals, including the final three, in CMS’ 9-8 upset win over #18 Pomona-Pitzer; tallied three goals and a steal in the team’s 15-7 win over Occidental.

Defensive Player of the Week: Noah Smith, Claremont-Mudd-Scripps – Notched nine saves and three steals in the Stags’ 9-8 upset win over #18 Pomona-Pitzer; registered four saves and a steal in the team’s 15-7 win over Occidental.

Player of the Week: Campbell Harris, Air Force – Scored four goals and added a steal, a field block and a drawn exclusion in the Falcons’ 10-9 loss to #12 UC Davis.