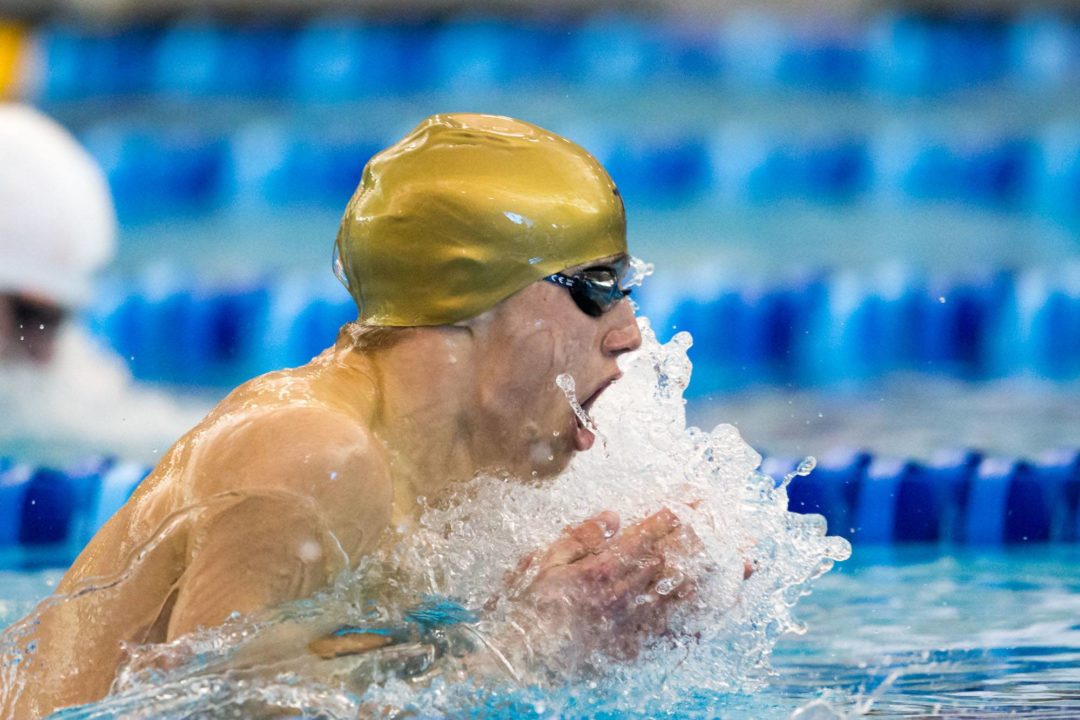 Zachary Stephens of Notre Dame ran away with the 200 IM in prelims on day one of the Hawkeye Invite. Stephens swam a 1:44.26 to take the top seed for Friday's finals. Archive photo via Tim Binning/TheSwimPictures.com

The Hawkeye Invite kicked off with the first session Friday morning, featuring several big performances in the , 500 freestyles, 200 IM, and 50 freestyles.

The biggest swim of the morning came from the Iowa men’s sprint group, who dominated the 50 freestyle. The Hawkeyes qualified the top seven sprinters for tonights A final, led by sophomore Joseph Halsmer in 20.14, good for an NCAA B cut. Six of his teammates followed him, with the seventh Hawkeye, Roman Trussov, finishing in 20.71. Justin Plaschka, a Notre Dame freshman, is the only non Iowa swimmer in the A final. Plaschka was eighth with 20.75. The Hawkeyes also qualified four for the B final.

Another storyline from the 50 freestyle, Iowa’s Brian Donatelli, a summer nationals qualifier, who broke both his tibia and fibula in his left leg only six weeks ago, qualified for the B final in 21.07.

The women’s 50 freestyle final will feature Samatha Corea of Denver and Olivia Kabacinski of Iowa as the top two seeds. Corea was 22.60 this morning, followed by Kabacinski with a 22.80. They were the only two swimmers under 23, although Zoe Huddleston of Denver was close with a 23.04. She is seeded third.

Becky Stoughton of Iowa ran away with the 500 freestyle, finishing in 4:49.66, a three second drop from her seed time and five seconds ahead of the next closest finisher. The next five swimmers were from Denver, led by Madeline Myers in 4:54.01.

Dylan Bunch of Denver paced the field in the men’s 500 prelims, touching in 4:22.15, good for a B cut and a four second advantage over the rest of the field. Jared Smith, also of Denver, Touched second with a 4:26.60. Scott Bergstrom was third with a 4:26.70, and Lukas Williams was fourth with a 4:26.75, both are of Denver, setting up a showdown between the three teammates for second place.

Emma Sougstad of Iowa swam to the top seed in the 200 IM in Friday mornings session. Sougstad was 2:00.94 this morning, putting her in striking distance of the school record of 2:00.52. She was followed by Washington State’s Loree Olson, who dropped four seconds from her seed time, touching in 2:02.61. Colleen Champa and Allison Orvis of Iowa, are seeded third and fourth with a 2:02.86 and 2:03.88, respectively.