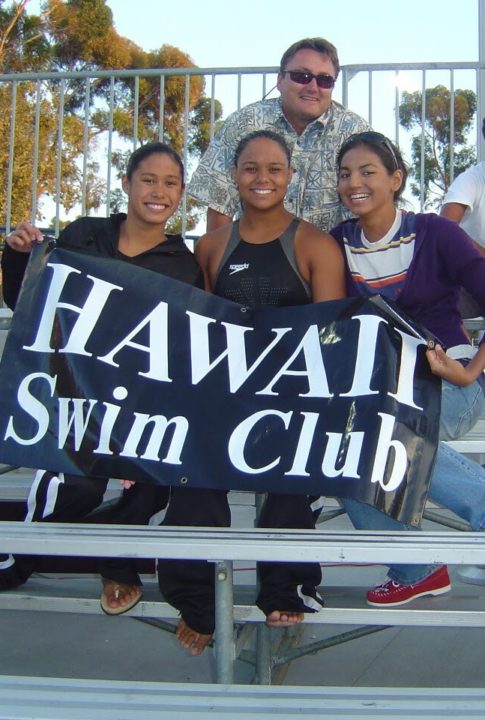 Sherwood coached Christel Simms to a berth on the Philippine Olympic Team in 2008, and helped both her and Brittany Beauchan to full scholarships in the NCAA. Archive photo via Christel Simms

Sherwood worked at HSC in Oahu, coaching athletes to the Olympics, Nationals and NCAA scholarships while working full-time at Waipahu Intermediate School.

Simms, who Sherwood coached for 10 years, qualified to represent the Philippines at the 2008 Olympic Games in Beijing in the women’s 50 and 100m freestyle, and went on to become an NCAA All-American at the University of Southern California (USC).

“There are not enough words to express my gratitude and appreciation for my coach. He changed my life and helped me accomplish my biggest dreams,” Simms told SwimSwam. “He had a special way of speaking positively about my future in swimming and carried out his efforts to continuously motivate and encourage me daily. He believed in me.”

In addition to coaching Simms, Sherwood also did volunteer work in the summer seasons coaching young swimmers in the Philippines.

“Thank you, Coach Scott, from the bottom of my heart. Your memory will live on in my life forever and you will always be my ‘ohana.”

In addition to attending the U.S. Olympic Trials in 2008, Sherwood helped Beauchan land a full athletic scholarship at the University of California, Los Angeles (UCLA).

“Today, I follow after Scott, impacting young lives and advocating for equity,” said Beauchan. “Had it not been for his words of encouragement (as well as his clear vision of success for all his swimmers and students), I’m not quite sure where my life would have led.

“He respected and celebrated the diverse cultures from which his swimmers hailed from. The words and actions of Scott irrevocably changed my life, and have made a lasting impact.”

Born on Feb.19, 1972, Sherwood graduated from The University of Hawaii at Manoa in 1999 as a collegiate football player, working closely with the school’s men’s and women’s swimming teams as a strength and conditioning coach from 1998 to 2000 while earning his Master’s degree in Education.

Rest in peace, Scott. Prayers to his family and friends.

Coach Scott was one of my Western Zone Team Hawaii coaches back in the early 2000’s. I’ll always remember the energy, swagger, and pride he instilled in us as a group that was representing the islands. You could tell that he was driven to push his athletes to a higher level especially against competition on ‘the mainland’ and internationally. He impacted many local youngsters over the years. Aloha Coach Scott rest in peace.