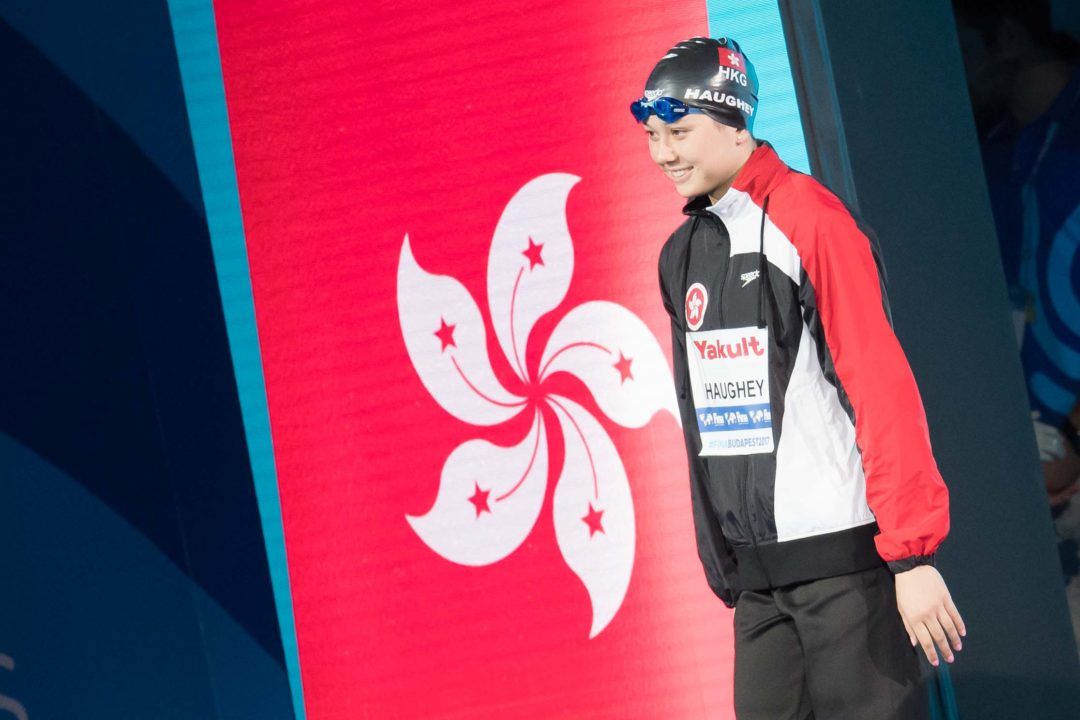 While most have not been recognized, Siobhan Haughey has swum under Hong Kong Records at least a dozen times in the ISL. Archive photo via Mike Lewis/Ola Vista Photography

Siobhan Haughey has continued her onslaught of the Hong Kong National Records in swimming with 2 more marks going down on Saturday at the University of Maryland. Both swims are also faster than the former Asian Record.

Both swims broke records that she set earlier in the ISL season. The old record in the 50 breaststroke was a 30.05 from Naples, while her 200 free best was a 1:52.01, also from Naples. Her 50 breaststroke time slides .02 seconds under the old Asian Record that was set by China’s Zhao Jin at the 2010 World Short Course Championships. Her 200 free on Saturday is also better than the former “Asian best” (there’s ambiguity if it’s a record) which was her time from Naples.

It’s not clear that Hong Kong will ratify her records. They have so far not published her records from the first 2 meets of the season, in spite of updating their short course national record book this week, although those swims were all done in Indianapolis and Naples, which FINA didn’t recognize. FINA has said, however, that they will recognize results from the last 5 meets of the season, including this weekend’s meet in Maryland, and so that could impact Hong Kong’s interest in ratifying the records as well.

Why records of Hong Kong and Chinese records are two different things? Hong Kong is a Chinese territory returned by British when the lease expired. Or you mention Hong Kong records same way as you would mention the American records and records of great state of Nevada for instance. Is it how FINA or IOC treats this situation?
Just saw reports from Hong Kong and am very confused with legal and actual situation there. Is it how Swimswam expressing its sympathy or that is how sport results has to be addressed to avoid any international and legal problems.

According to the Hong Kong Wikipedia page, Hong Kong both “maintains separate governing and economic systems from that of mainland China” in general, and “represents itself separately from mainland China, with its own sports teams in international competitions.” I believe it is the same for Macau as they are both special administrative regions of China.

Yozhik: I have my foot in my mouth. Dare I use my tongue to tickle it?

Listen, the last thing i want to start here a political discussion especially in the situation when the topic is very sensitive for several groups of people. I didn’t really get your emotional response, but hope you are ok and didn’t hurt yourself. Believe me it isn’t worth it to react that strong on my posts.

That was the first thing you did….

When Hong Kong was handed back to China part of the agreement was that Hong Kong would be allowed to continue representing themselves in international sport and presumably that also includes records.

Thanks. Is it forever? Was it IOC decision? Will Hong Kong have own delegation at Olympic Games in Tokyo? Does Haughey consider herself Chinese? Just curious.

(Article 151, Chapter 7 of The Basic Law) said Hong Kong can continue their own sport and will have their own delegation at Olympic games in Tokyo, and it will be like that unless there is anything changes. She represents Hong Kong because she was born and raised in Hong Kong.

Hong Kong always have their own delegation at Olympic Games.

What an ice cold take

Hey, what if instead of such comments make the take as warm as possible so everybody will be happy.
I spent a lot of years of my life behind the “iron curtain” and know first hand what propaganda is. Then I found myself on the other side of this curtain and was surprised very much of how more sophisticated propaganda is here.
When I’m asking for information it means I’m asking for information and not for politically oriented statements. Why is it so hard to understand, you warm taking people.

The IOC recognizes 206 NOCs while the UN has only 193 member states (+2 observers) which shows that there are more “sport countries” than actual countries. Hong Kong participated at every Summer Olympics since 1952 with one exception (1980).
Hong Kong isn’t unique in this regard. The US Virgin Islands and Puerto Rico also competes at the Olympics despite both being US territory.

Hong Kong has its own Olympic committee. Puerto Rico also has it’s own. Both are considered separate nations in the sports world. If HK Olympic Committee was folded into Chinese Olympic Committee I am willing to bet Siobhán switches to represent Ireland.

Looks like the 50 Breast is an Asian record too
(Previous record 29.90)

Siobhan Haughey probably saw the number of comments under this article and thought, “Oh, that’s nice, some of my friends are congratulating me on the two records, let me see who they are…..”

(Congratulations Siobhan, you’ve been a star in these ISL competitions. And good luck next summer.)