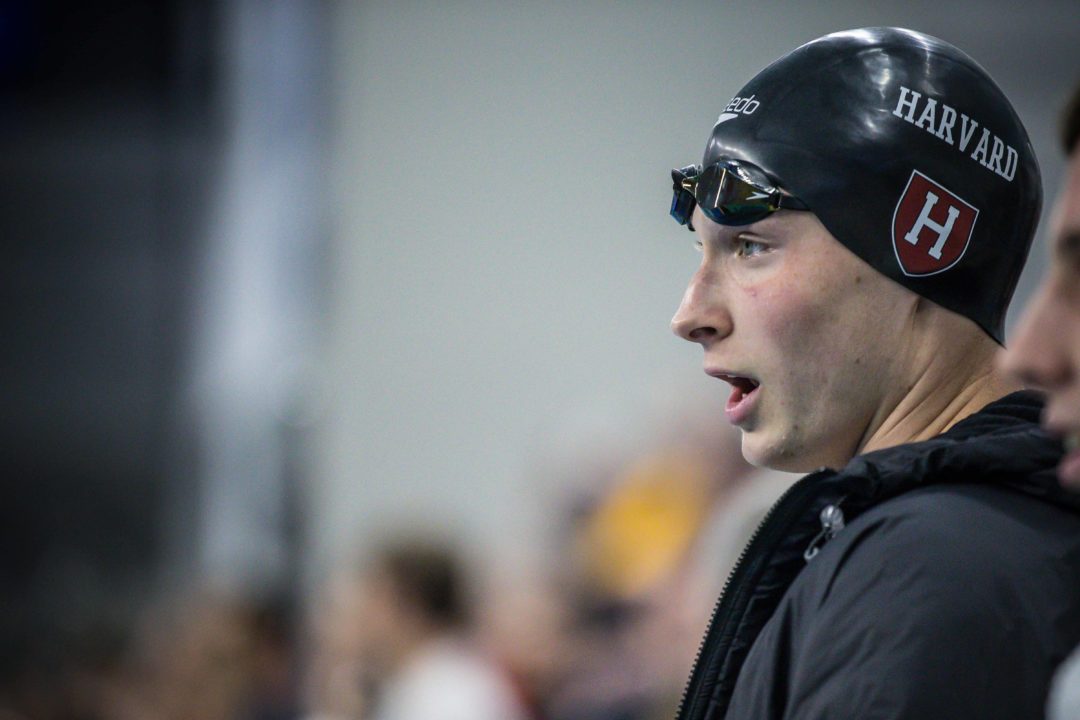 "We were always aware of the fact that his senior year could be a year where he redshirted to be ready for Olympic Trials, but this year sort of cemented that we were on the right track." Current photo via Jack Spitser/Spitser Photography

If you were surprised by Dean Farris‘ performance at the 2019 NCAA Men’s Swimming & Diving Championships, you weren’t alone. But for Harvard head coach Kevin Tyrrell, NCAAs was the culmination of a three-year process that would cement his and Farris’ decision to redshirt the 2019-2020 academic year and train with the University of Texas under the guidance of Eddie Reese.

“Well this was sort of a three-year process in terms of seeing where Dean was in high school and then for projecting out where he could possibly be in three years,” Tyrrell said. “We were always aware of the fact that his senior year could be a year where he redshirted to be ready for Olympic Trials, but this year sort of cemented that we were on the right track, and when a kid’s got an opportunity to do something like swim really fast at the Olympic Trials and do really well then that’s something I want to support.”

So it’s official: Dean Farris will not compete at the 2020 NCAA Championships, and will instead focus on long course competition exclusively in the lead-up to the 2020 Olympic Trials in Omaha.

A spot on Team USA’s 2020 Olympic roster (not Ireland’s) is Farris and Tyrrell’s goal, but Tyrrell does not want the results of next summer’s Trials to be the only metric of success for Farris’ upcoming 14 months in Austin.

“[Making the team is] the goal, but that’s not the way I’ve phrased it with Dean, because I don’t want him to take this next year and be solely focused on ‘you have to make the Olympic Team or this would be a failure.’ What this is supposed to be is a life-long learning experience where he’s going to put himself fully into the process, engage with swimming over the course of the next year, and then see how fast he can go. And then obviously we’d like it to turn into him making the Olympic Team, but as you know, particularly in the United States, it’s extraordinarily difficult to make the Olympic Team. So it’s really more about the mental and physical challenges that lie ahead of him, and then let’s help, use those to help him grow as a person.”

In Austin, Farris will focus exclusively on long course racing and hone in on his top four events: the 100 freestyle, the 200 freestyle, the 100 backstroke, and the 200 backstroke. With training partners including Townley Haas, Clark Smith, John Shebat, and Austin Katz, just to name a few, Farris will be pushed in practice every day. The particular emphasis on long course stems from both the necessity of familiarity and aptitude required for racing in an Olympic setting, and Farris’ own particular needs.

While watching anybody blast a 1:29.15 in the 200 yard freestyle is incredible to say the least, Tyrrell said in an earlier interview with SwimSwam that he thought Farris should have been faster, but he shifted gears too quickly.

“He needs to understand when he’s going to change gears within the 100 or the 200. That’s one of the things we worked on for yards this year, and one of the reasons he had so much success, is he really applied himself to figuring out when he’s supposed to change gears. But as you know, long course is a very different beast, it’s almost like a different sport, so now he needs to focus exclusively on that in the next 14 months.”

“What this is supposed to be is a life-long learning experience where he’s going to put himself fully into the process, engage with swimming over the course of the next year, and then see how fast he can go.”

As a student-athlete at Harvard, Farris has grown in both maturity and athleticism over the last three years, helping to bring the team up with him. At NCAAs, Farris accounted for 53 individual points of Harvard’s 132 team points, also swimming key legs on the 200, 400, and 800 freestyle relays, as well as the 200 medley relay. Recognizing that his contributions are what shot the Crimson into the top-8 team standings, what do the Harvard coaches and swimmers say of Farris’ decision to redshirt the upcoming season?

“Dean really wanted to stay at Harvard for his senior year because he’s very committed to his class, his graduating class at Harvard, and he’s very committed to our program, so I heavily influenced him, along with my associate head coach Sam [Pitter], to say ‘hey, this is something that’s in your best interest, and we’d certainly love to have you back your senior year,’ but I really tried to push him in this direction,” said Tyrrell. “And the decision was always going to be Dean’s, but I think when you’ve got somebody that’s an athlete of this level you want to do what’s right for them, so that’s what I tried to do.”

“Everybody’s been very supportive. One of the things we try to do with our program is have individual goal meetings with each swimmer every six weeks, and guys have had some questions about Dean taking the year off, because they see that he has the potential to do something extraordinary, and everybody wants the best for Dean,” said Tyrrell.

Over the next 14 months, Farris will train in the very pool where he set his first American Record and where the record board lists his name three times. But before he gets to Austin, Farris will race in his hometown alongside his club teammates from the Metro Atlanta Aquatic Club (MAAC) at the Atlanta Classic. In July, he will head to Naples, Italy, to represent the United States in the World University Games.

Good call Dean! School will always be there but Eddie won’t last forever, this is bill belichick Tom Brady 2001 2.0. 2020 is going to be incredible

Congrats on the first post. I was expecting hundreds by now 🙂

I recall this other guy from Harvard red shirting his senior year to take a shot at making the Olympic Team. He said, “I don’t ever want to go through life thinking ‘what if'” and so he committed to a solid year of training for a goal that few ever achieve. And it worked. Go Dean. You will be 2020 bound. And you will never regret this decision!

Sounds like Johnny Weir, but he called it turquoiseshirting

One of the marks of a great coach is that he’s willing to share credit, and Tyrrell is doing exactly that here. If Farris does make the Olympic team, Reese will inevitably get some of the credit, but that doesn’t seem to bother Tyrrell in the least. Kudos to him.