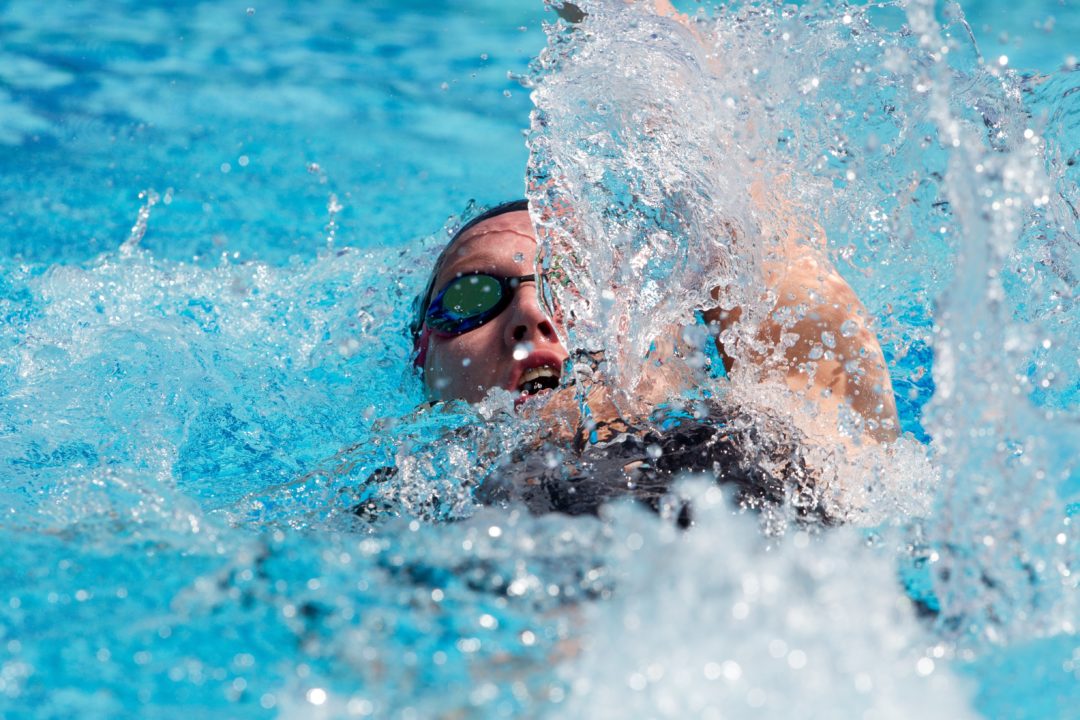 After four individual records were snapped on Tuesday, the lone swimmer to take down a new all-time meet mark is Courtney Weaver from the Flint YMCA in Michigan. She won the 100 in 1:00.22. That takes down a mark set in 2008 by Leah Gingrich, who was one of the most dominant YMCA swimmers of the last decade.

For Weaver, that’s two-tenths better than she swam at the Olympic Trials. Her exploits in the longer, 200 fly have earned her a spot on the Jr. Pan Pacs team that will head to Hawaii at the end of August.

She finished just ahead of Middle Tyger’s Haley Lips, and Indiana commit who is making a serious charge for Swimmer of the Meet. Lips took 2nd in 1:00.58.

In the men’s 200 free, Upper Main Line’s Vlad Komarov won in 1:52.76. Komarov is another Russian National to win an event: the 2nd in two days, after Gregoriy Tarasevich from Orlando won the 100 back on Tuesday. Just like in that 100 back, Komarov’s teammate Nic Graesser was runner-up again in this race, with a 1:54.44. Graesser is committed to North Carolina next year, and will bring the Tar Heels a powerful new 800 free relay piece, as well as an immediate ACC scorer in the 200 back (he was a 1:46.8 at yards Nationals in April).

Virginia Tech commit Joe Bonk continued to excel in the pure-power events, adding a victory in the 100 fly to his 50 win earlier in the meet. Bonk touched in 55.62 – a best time for him.

The winners of both the boys’ and girls’ 400 free relays also broke meet records. The Middle Tyger YMCA group of Katrina Konopa, Lips, Ali Snover, and Ali Galyer touched in 3:51.98, which cut almost three seconds off of the record set by this same club last year (though without Lips or Galyer). The relay from Wilton took 2nd in 3:52.81, which also broke the old record. The Wahoos’ anchor was Lauren Smart, who split a 56.74 on the anchor leg.

In the men’s relay, Bonk and the YMCA of the Triangle Area in 3:29.36, breaking a three-year old record by more than a second. The squad was made up of three swimmers (Bonk, Alex Mathews, and Macon Crowder) who will all be moving on next year, and one promising young 15-year old Colin Ellington, who had a great split of 52,44 on the 2nd leg. Bonk split 50.04 on the anchor.

Other Winners of the meet:

Middle Tyger extended their lead on the third day of this meet, and now sits 160 points ahead of the rest of the field. There’s a new number two: the Wilton YMCA, having not won an event since the first day, shot into 2nd with continued depth. The Triangle YMCA and Upper Main Line sit 3rd and 4th, respectively, while the two teams from Somerset (Valley and Hills) had relatively quiet days.