Haley Anderson Is the Newest Member of Team USA 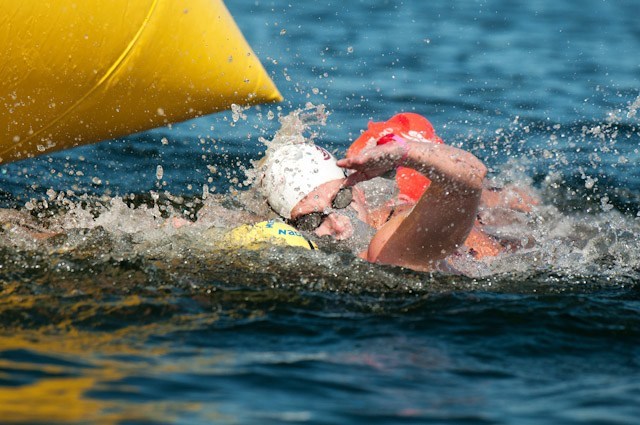 Haley Anderson not only earned an Olympic spot, but won the qualifier in Setubal, Portugal (Photo Courtesy: Mike Lewis/OlaVistaPhotography.com)

In the afternoon in Setubal, Portugal, Anderson won the women’s 10km swim to stamp her name on the itinerary for the 2012 London Olympic Games in a time of 1:44:30.6. Her countrymate Ashley Twichell was 4th in 1:44.37.7. Per FINA rules, only one can go to the Games, which means that Twichell will have to totally shift her focus to the pool trials in 16 days.

Anderson might have runner-up Eva Risztov to thank for that victory. Risztov, the Hungarian who won three World Championship silver medals when she was younger, pushed the pace very hard very early on (hence the incredibly fast winning pace – about 17 minutes faster than what won Worlds last year). Between the two Americans, a fast early pace seems to work in the favor of Anderson. Consider US Nationals, for example, with a slower trek, Anderson didn’t have to expend as much energy early in the swim, and thus was able to put on a huge closing kick. In this race, she wasn’t able to pull away from the field and locked into a stroke-for-stroke battle of four: two American and two Hungarians.

Risztov had her own intracountry battle with young 18-year old Anna Olasz. She wasn’t really in the picture until the final lap of this race, and though she gave Risztov a race, she never really threatened to beat her. She ultimately finished 3rd, 6 seconds back of the leader (and 4 behind Risztov).

Yangqiao Fang from China was 5th overall, but will stand as the third qualifier. She was far ahead of her countrymate (a minute and a half at the final touch), which left her in the best position in this race. She never really had to try and win, instead she was able to sit in that position, just behind the lead pack, throughout the race and comfortably slide into the Olympics.

From Canada, Zsofia Balasz was 6th overall, 8.2 back. She was in control of the top Canadian spot for most of this race, but it almost faded away with Nadine Williams making a big push around 7000 meters. But ultimately, it was the more experienced Balasz who hung on.

Another great race-withiin-the-race, at least early on, was between the French swimmers. Coralie Codevell swam 2nd for about the first 4 kilometers, but seeing the pace pick up, Ophelie Aspord let her go. But around the halfway mark, Codevell fell off the map and was more than two minutes behind her teammate.

Other results of note include Gator Swim Club trainee Yanel Pinto, who finished 18th for Venezuela. As the top qualifier from South America, she should be safely into the Olympic Games as well.

To find the European qualifier, it took a second look by meet officials. But it was ultimately the Ukraine’s Olga Beresnyeva who took the spot by two-tenths of a second. Overall, she was 15th, which is exactly the same spot she was at at the World Championships.

South African Paralympic hero Natalie Du Toit looked to be out of this race early on, except that she and South African teammate Jessica Roux were the only serious contenders in the race from Africa. Though they were more than 6 minutes behind the leaders, there was a furious finish to see who would claim the continental spot. They finished only one-tenth of a second apart, and it was the less-heralded Roux who earned her Olympic spot.

Because the Brits already have a qualifier from the World Championships (Keri-Anne Payne) meaning that the top 10 swimmers from unique countries qualified automatically. Those 10 are:

Complete official results have not yet been posted by FINA, but will be available some on OmegaTiming.com.

What is this crap about only one swimmer per country qualifying? The other swimming events are all two per country, why not keep it consistent?

Craig – part of the issue is the need to keep the field small. If the open water field expanded to 50 swimmers, it wouldn’t work, and as a fledgling sport, there’s something to be gained by having as many countries represented as possible while still keeping the race elite.

There was an opportunity to get two athletes in per country – if both finished in the top 10 at last year’s World Championships.