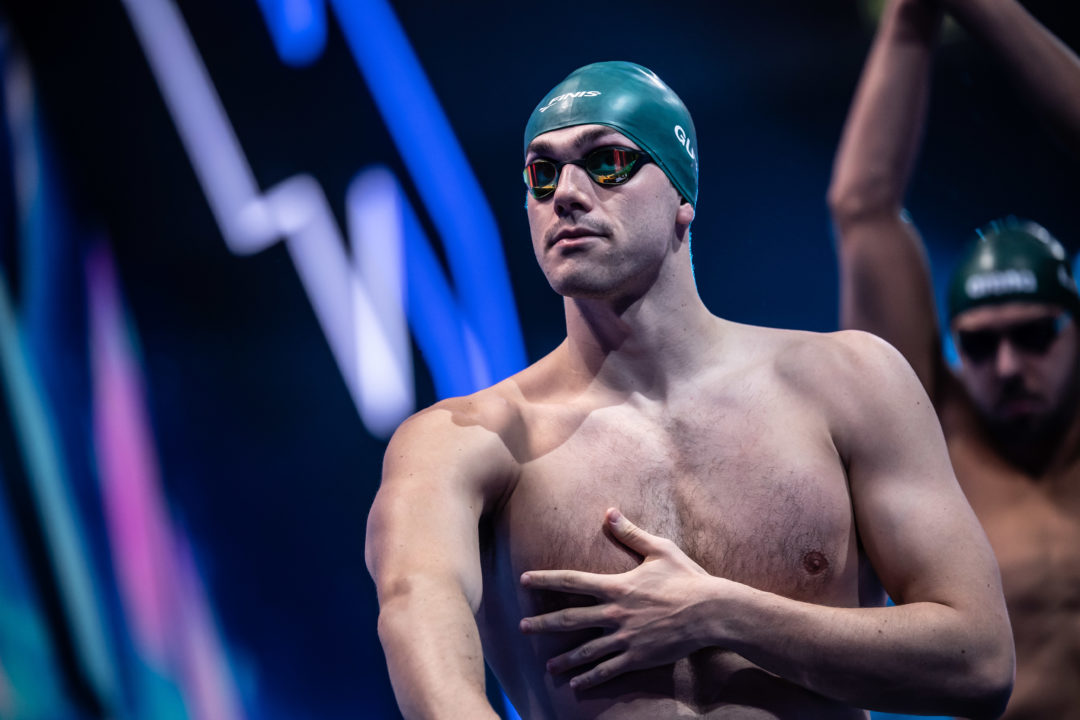 James Guy hit a season-best, while Kathleen Dawson and Molly Renshaw also made some noise on day 1 of the British Swimming Invite. Archive photo via Mike Lewis/Ola Vista Photography

The 200m backstroke performance from Luke Greenbank, which produced a new British national record, may have been the highlight of the evening, but several other notable swims came out of night 1 of the British Swimming Invitation Meet.

For instance, 23-year-old Kathleen Dawson was true to form, firing off a Scottish national record en route to topping the women’s 50m back field. Touching in a rapid effort of 27.63, Dawson shaved nearly .30 off of her own previous Scottish standard and lifetime best of 27.92 logged at the 2018 European Championships.

Dawson’s new career-quickest tonight was enough to hold off the gold medalist of the aforementioned Championships in Glasgow, Georgia Davies, with the Energy Standard ISL member finishing in 28.06 for silver here in Manchester.

Ripley’s Molly Renshaw impressed once again in the women’s 200m breaststroke, posting the 2nd fastest time of her career. Blasting a time of 2:22.78, 25-year-old Renshaw was less than a second off the British record-tying feat she came up with at the Manchester International Swim Meet just weeks ago. The time then at this same pool came in at 2:22.08, matching Jocelyn Ulyett’s same mark from 2017.

Ulyett was indeed in the race, registering 2:26.19 for silver while home club swimmer Katie Matts got to the wall in 2:26.70 as the bronze medalist this evening.

Runner-up this evening came in the form of former World Junior Champion Emily Large, with the Bath racer clocking 2:09.54. Scottish short course 200m fly record holder Keanna MacInnes was right there in the mix as well in 2:09.88 to round out the top 3.

Among a strong field of men’s 100m fly competitors, it was World Championships medalist James Guy who made the most noise by registering the only sub-52 second time of the field. Stopping the clock in a time of 51.71, Guy made mincemeat of the 52.46 he put up just weeks ago at the Manchester International Swimming Meet.

Additional results in the final included Guy’s young teammate Jacob Peters snagging silver in 52.73, while NY Breaker Joe Litchfield got it done for bronze in 52.86. Rising Northampton standout Ed Mildred was next in line in 53.55 while Scottish ace Duncan Scott placed 5th in 53.58.

Olympic champion and reigning world record holder Adam Peaty put up a cool 58.52 to easily top the men’s 100m breaststroke field, although James Wilby was also under a minute in 59.31.

I like how peaty can go a 58 mid and not be the title of the article. We expect nothing less from him at this point lol.

I was thinking the same thing.

Anyone else goes 58.5: people are spitting their drinks out

Peaty goes 58.5: bottom of the article

Kathleen Dawson coming for that Peaty inspired medal in the 4×100 mixed medley relay in Tokyo huh? Georgia Davies gunna have to up her game !

Also this was the first time in so long where James Wilby has looked like a genuinely class athlete, love to see it

It would be nice to see a GB woman under 59 secs again, I don’t think there’s been one since Gemma Spofforth (maybe Lizzie Simmonds, but she was always better at the 200), so it’s been a while. Not necessarily expecting it tonight from Dawson, but it should be coming sooner rather than later.

James Wilby is possibly the only breaststroker out there who is closer to Peaty LC than SC. He was consistently 3s slower during ISL!

Increasingly positive signs for the future of female sprint free – Juniors Evelyn Davis & Harriet Rogers (both b2004) 25mid already this year, and Emma Russell (2003) just a clip back at 25.7, her first time under 26s. Russell tends to be more 100/200 orientated, so I’m interested to see what she can do this weekend.

Another great swim by Renshaw. Shame Wood chose not to race the 200 breast at this meet as I think she would have pushed Molly to sub 2:22.
Great to see James Guy looking good and promising signs from Kathleen Dawson as a 27.63 is pretty impressive and she can go even quicker judging by that long touch at the end of the race.