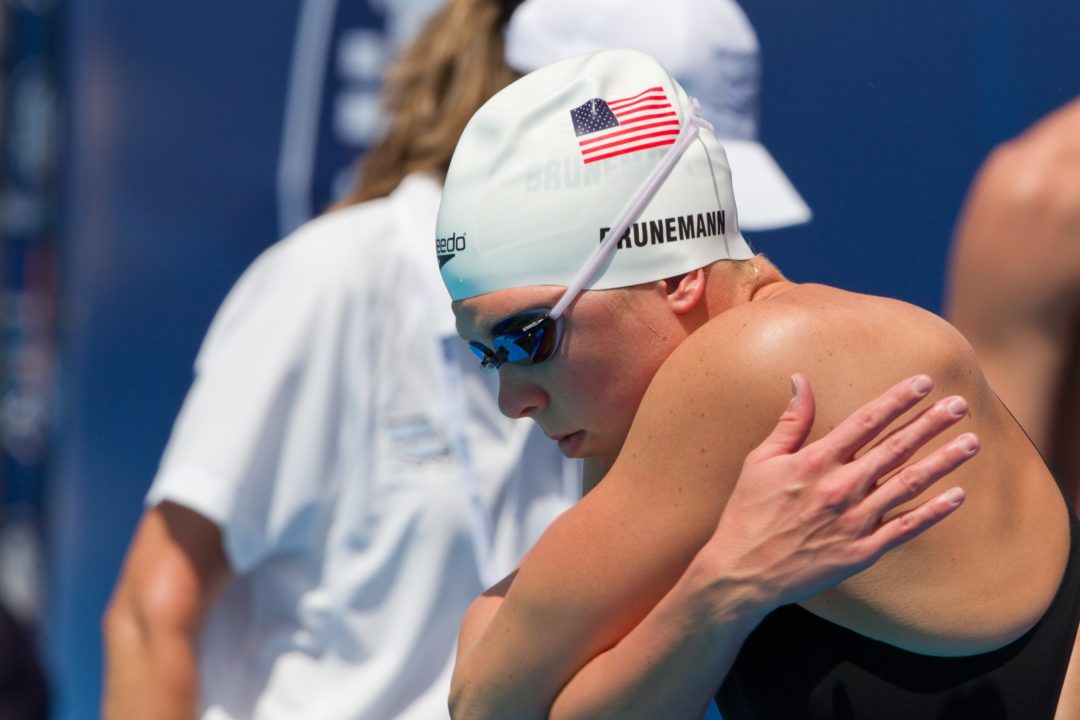 Emily Brunemann is among the favorites in a wide-open 10k at Nationals in Florida. (Photo Courtesy: ©Tim Binning/TheSwimPictures.com)

This year’s USA Swimming Open Water National Championships will kick off this Friday,April 27th, in Fort Myers, Florida at the Miromar Lakes Beach & Gold Club. The Olympic distance, the 10k swim, will go off on Friday at 8:00 AM for the women and 11:00 AM for the men. The encore, the 5k, will then run on Sunday with the men starting off at 8:30 and the women afterward at 9:45.

After having to pull a 12th-hour change-of-venue last year from the Gulf side of Florida to the Atlantic side, in an effort to capture cooler temperatures, this year they’ve gone straight to an inland lake. The freshwater lake will more closely resemble the Hyde Park Serpentine that will play host to the Olympic race. Without the usual chop and ocean-dwelling hazards of many open water races, these swims will be relatively controlled.

That can sometimes cut down on the excitement at the end of the race. Take last year’s Nationals (which qualified for the World Championships). Sean Ryan caught a wave coming around an awkward final turn 20 yards from the finish, crashed down on top of Andrew Gemmell, and wound up on the team.

On the other hand, it makes for more of a “true” race, where the best swimmer is most likely to come out on top. Whether or not that fits your definition of open water swimming is a personal decision.

As for conditions, they are expected to be fairly-close to ideal on race weekend. Air temperatures should be in the mid-70’s for the kick-off of the early race on each day, sneaking up into the low 80’s by the time of the later sendoff. Water temperatures are expected to be in the upper 70’s (though even that’s a bit warm as compared to traditional temps in the area). All-around, it should make for a great set of races.

The big races will be the women’s 10k by far. With Alex Meyer having locked up a spot for the Olympics by way of his 4th-place finish at Worlds, the American men are swimming for nothing but bragging rights.

The women, however, will have the opportunity to earn their way into the final Olympic qualifier that is to be held in Portugal on June 9th (women’s race) and June 10th (men’s race). The top two finishers in Friday’s 10km will be headed there as the American representation. Once the swimmers get there, the qualifying becomes a bit more complicated. Only the top-finishing swimmer from each country in Portugal is eligible for the Olympics; on top of that, swimmers in the top 10 will move on to London.

That’s 9 spots allotted for the race; 1 extra because Britain’s Keri-Anne Payne has already earned a spot for the “host” country. (The highest-finishing swimmers from each continent will go to the Olympics – for every continent that puts a swimmer in the top 10 in Portugal, another at-large spot would be available). Obviously the rules are complicated, much like the ones that FINA installed for pool swimming. Read them in full, from FINA, here.

But all that matters this weekend is getting into the top two.

Brunemann comes into the spring on-fire. She made two appearances at last year’s FINA Open Water World Cup, in China and Hong Kong, and came home with two big 10km victories. Haley Anderson is also feeling good after taking an NCAA Championship in the 500 free in the pool; though her swim in the longer mile at NCAA’s seemed to imply that she was focused a bit past that meet towards these Nationals.

Jennings, on the other hand, is coming off of a brutal injury from a race late last year, which didn’t see a full return until February.

Twichell is training out with the distance group at Mission Viejo, alongside the likes of former open water star Chloe Sutton. She’s a relative newcomer to the open water game, having never even attempted an open water race until graduating from Duke in 2011. She’s come on with a bang though – taking the 5km bronze medal at Worlds individually, and gold in the team 5km swim. She also won the Speedo Challenge at the Midmar Mile, and was the first female recipient of the Fran Crippen Elevation Foudnation Work the Dream grant.

Fabien will be the pace-setter in this race. She usually tries to race wire-to-wire, so she should push the pace early. That strategy could play into her favor in calmer conditions that should lead to a faster race.

Claire Thomspon could also be a factor in this race. She was on last year’s open water team too in the 25k, and was the only American who even attempted the race in what most experts afterwards considered to be unsafe heat. She was ultimately pulled from that race with just over two miles (4km) to go. She was 5th at last year’s meet, and was the lowest-finishing woman to be invited to Shanghai for Worlds.

The big darkhorse is 14-year old Becca Mann who trains with Randy Reese and the Clearwater Aquatic Team. She’s destined for a huge future, either in open water or pool swimming (she’s got a pair of long course 11-12 National Age Group Records in the 800 and 1500 frees). She’s a rising name in both aquatic disciplines, and after finishing 11th last year (6-and-a-half minutes back), she will be a popular upset pick.

There’s other young swimmers who have become most known for pool exploits, but could ultimately have a future in open water, in defending 800m National Champion Gillian Ryan from North Baltimore and Rachel Zilinskas. Kaitlin Pawlowicz, who had a great freshman season at Texas before not ending as well as hoped, will also be in the race.

My money is ultimately on Brunemann and Twichell, but this race is wide-open.

The men’s race is significantly less-interesting; in part because there are no Olympic bids on the line, so much of the field will have their focus on the 1500 at June’s Trials in Omaha. Alex Meyer, the first American Olympian declared to the 2012 team, is probably sitting out as he’s still not completely healed from his broken collarbone (though he’s still on the start lists, so there’s still a chance). Chip Peterson is also sitting out in an effort to stay healthy as well; his health issues, caused by an unfortunate open water swim, seems to be the only thing between him and a sub-15-minute 1500 free in Omaha, and a possible upset Olympic spot. Mark Warkentin, who is the veteran of American open water swimming, is out as well.

That leaves Sean Ryan and Ryan Feeley, teammates at Michigan; Andrew Gemmell from Georgia; and the high schooler Arthur Frayler as the race’s main contenders. The first three swimmers are coming off of college seasons, though none of them looked to burn their taper on those meets.

Frayler will be headed to Florida next year, and the Gators are sending a huge group in this men’s race. That includes Jason Taylor, Connor Signorin, Carlos Omana, and Nicholas Caldwell. None of them, however, are expected to be big factors, though Signorin has come a long way since last year.

But those top four should be the ones who battle for the title; assuming he’s not too affected by the college season, Gemmell has to be the favorite.

Both 5kms will be more of “prospects” races, with most of the big-names sitting them out. There are some financial implications of the race, specifically regarding eligibility for an increased USA Swimming stipend, but with most of the top competitors being amateurs, they won’t be too worried about that either.

This is five names

They need to get you on the boats so you can do some “on-site” reporting. Being a lake swim will be much easier than last years surf and barf in Fort Lauderdale. Seems that many coaches supposedly found out about first hand…oh so I hear 🙂

Heard the same things about last year. I think that’s how the Fort Meyers folks pulled the meet in this year…they told all of the officials how smooth the water was at their golf club. Ha!

And who says Open Water is not exciting! It is going to be down to the wire. Keen to follow it to see what happens. Thanks for the insight!