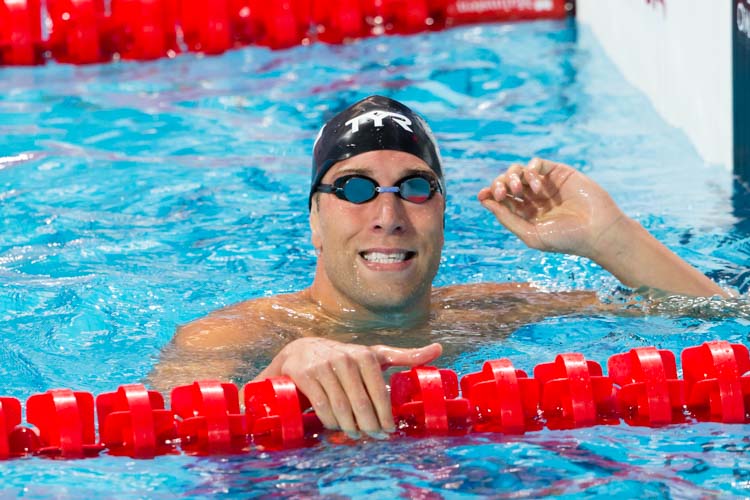 A day after setting the U.S. Open record in the 100 back on a relay lead-off, Matt Grevers kicked things up a notch, setting a new world record in the individual iteration of the event. Archive photo via Tim Binning/TheSwimPictures.com

A day after setting the U.S. Open record in the 100 back on a relay lead-off, Matt Grevers kicked things up a notch, setting a new world record in the individual iteration of the event.

Grevers popped off a 48.92 to dominate the field and become the fastest 100 backstrokers in short course meters history by two one-hundredths of a second.

The previous mark was held by Nick Thoman at 48.94, set in 2009, the last year the buoyant full-body suits were legal under FINA rules.

Grevers’ time is also a new American record as well as a lowering of his U.S. Open record from last night.

It was the front-half split that provided the extra juice for Grevers’ big Saturday swim, though interestingly enough, his opening 50 split is still behind the split Thoman went in setting the record. A look at the splits of Thoman’s former world record, Grevers’ new world record and his relay lead-off from last night:

Grevers continues to be outstanding in the back half of the race in the short course meters pool, blowing out Thoman’s record split by two tenths of a second.

The 2012 Olympic champ in the long course 100 back, Grevers is looking to gain momentum in a very crowded world backstroke field. Australian Mitch Larkin has been on a tear, and Grevers will face a tough test just to make the U.S. Olympic team with veteran David Plummer blowing up this fall and rising college star Ryan Murphy looking like a legitimate international contender.

Just finished watching the races from day 1 – I sensed Grevers was going to do something BIG . Fantastic swim .

a smash of Thoman’s record would have been a :47.99. I agree with SAMH. Still, Grevers is the worlds best backstroker. The way he is managing his training and meets, I am confident he will break Piersol’s WR in the 100. 200, is still Work in Process. BTW, he out split Nathan Adrian in the 4×100 FR at the Duel in the Pool. You think Grevers is in the zone?

Grevers sais not long ago he still loves racing the 100 free ( for the relay most probably next year ) .

Can we not use the word smash here? He broke it by 2 hundredths. It is a really impressive swim, I am very happy for him, especially since in his interview he said he wanted to go .33 faster and he did EXACTLY that. But he did not smash the world record, he simply broke it.