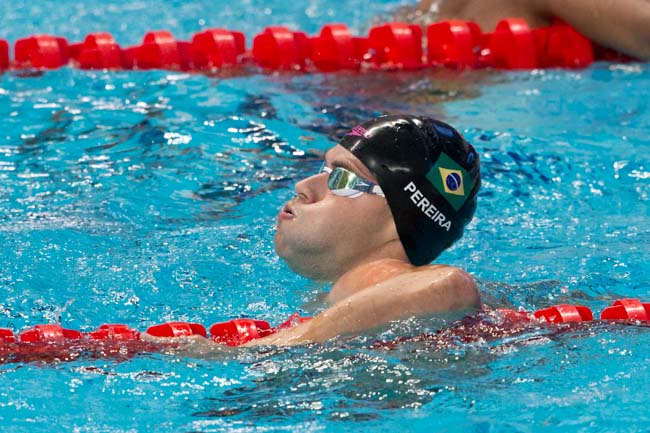 The first of two Olympic-qualifying meets for Brazilian swimmers will kick off next week, as start lists for the 2015 Brazil Open have been released. Archive photo via Tim Binning/TheSwimPictures.com

The first of two Olympic-qualifying meets for Brazilian swimmers will kick off next week, as start lists for the 2015 Brazil Open have been released.

The lists include just about all of the biggest names in Brazilian swimming competing over the 4-day event.

The Brazil Open will take place in Palhoca, a municipality in the state of Santa Catarina at the southern end of the nation. The meet runs from Wednesday, December 16 through Saturday, December 19.

The Full Start Lists For The Brazil Open Are Here

Brazil’s two returning medalists from the 2012 Olympics are entered, but in light event lineups. World record-holding sprinter Cesar Cielo will swim the 50 free and 100 free. Meanwhile Thiago Pereira will take an unusually light lineup, only entering the 200 IM. Pereira won silver in that event at last summer’s World Championships, and silver in the 400 IM at the London Olympics.

Etiene Medeiros, the only female medal-winner for Brazil at the 2015 World Championships, will enter the 50 free, 100 free and 100 fly at the Brazil Open. Also returning as a medal-earner from Kazan is Nicholas Santos, who is entered in the 50 fly, 50 free, 100 fly and 100 free. The 50 fly is the only race in his lineup that is not an Olympic qualifying event.

The upshot is that Brazil will select its team from the top times at two different meets: next week’s Brazil Open and the Maria Lenk Trophy in April of 2016.

But the complementary change to that narrowing of the qualifying opportunities is that Brazil will select its team based solely on FINA’s rules for Olympic rosters, rather than adding extra time standards as the nation has done in the past. Typically, Brazil has set its qualifying standards somewhere around the 8th-place finishing time from the World Championships in order to field a team where every swimmer should have a shot at an Olympic final.

The Brazilian Swimming Federation also has a framework in place to add extra relay swimmers and to adjust the roster as it sees fit to compose the best roster for the Olympics the nation will host next summer.

We will see some fast times in the last heat of 100free. Most of them can’t afford to go easy.Will be interesting…