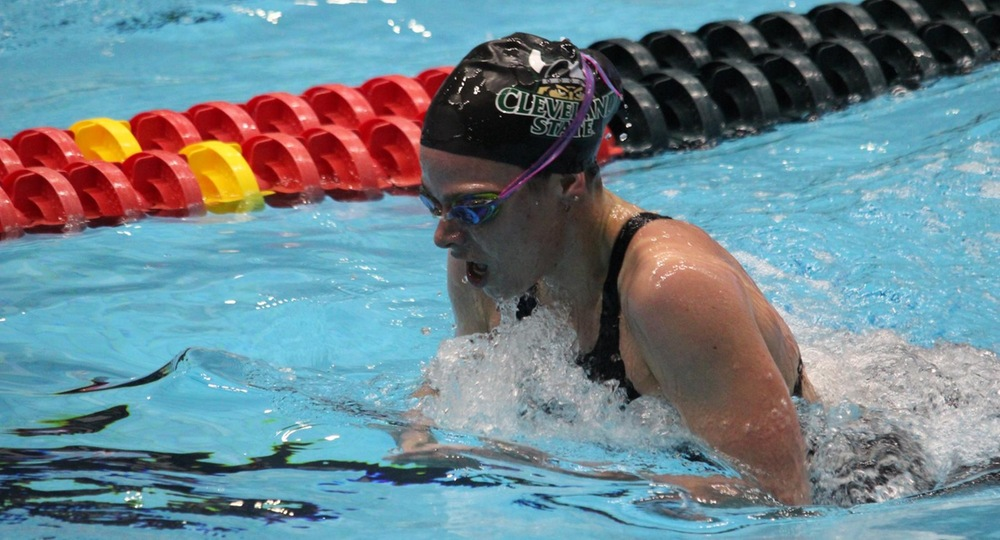 The Green Bay men's team took home a 163-137 victory over Cleveland State, while the Viking women won 150.5-149.5 over the Phoenix. Current photo via Cleveland State Athletics

GREEN BAY, Wis. (GreenBayPhoenix.com) —The Green Bay swimming the diving team competed at home this weekend against Cleveland State.  The men’s team took home the victory with the score of 163-137.  The women’s team fell by the narrow margin of 149.5 – 150.5.

Both Medley Relays started off with victories for the Phoenix.  The women’s team of Clara Momats, Emilie Boll, Claire Stuart and Paula Schulte finished with a time of 1:47:06.  The men’s team of Ricky Davis, Max Boehnlein, Riley Darling and Ben Redman recorded a time of 1:32:80.

“It’s always fun to compete in front of our fans at home.  The team keep making strides week by week in the pool and on the boards,” remarked interim head coach Eddie Gillie.  “We’ve had quite a few season best and even some PRs on the boards. We’ll look to continue to get better before we head out to compete against Oakland in a few weeks.”

“Today we demonstrated coachability, courage and resilience,” head coach Hannah Burandt said. We were facedown at the first diving break—men down 37 and women down 15. Diving came in clutch on both sides and helped get our momentum going. Our men and women rose with great courage to outswim the competition in the second half. Our women came out on top by one point and our men fell short.”

Kerro won her first collegiate event with a score of 259.80 points in the 1-meter. After finishing as the runner-up in the 1-meter (224.10), Henrichsen won the 3-meter with 235.12 points to claim her first victory of the season.

“We often highlight those who win or sneak in a close finish,” Burandt said. However, today we needed every single person that snuck in fifth to score one point. Because when we get to Magnus and the Horizon League Championships, we will need to continue winning close races, but our depth people will be just as valuable as those who win.”

The CSU men were led by a trio of Vikings who each won two individual events, including junior Matt Akers’ impressive performance on the boards.

Akers won the 3-meter event with 318.07 points, just missing an NCAA qualifying score. However, he easily cleared that hurdle by winning the 1-meter event with a score of 330.60, more than 50 points ahead of the runner-up and 30 clear of the NCAA zones standard.

“As a combined program, our entire coaching staff is beyond proud of their grit and fight,” Burandt said. “As Coach Ben said, ‘What we did today is the most challenging thing to do in swimming and it’s not about swimming fast, but the ability change our engagement, excitement and enthusiasm and fight back after being down’.”

Cleveland State will take some time off from competition before hosting the Magnus Cup in late November.