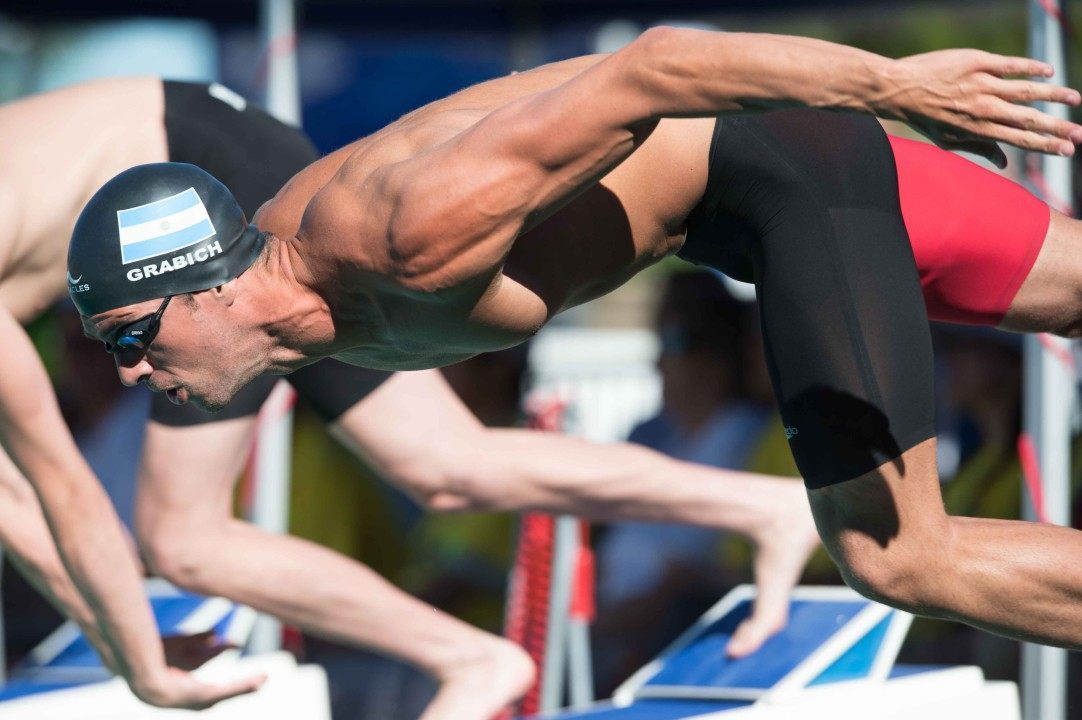 Swimmer Federico Grabich notched a new Argentine National Record in the men's 200m freestyle tonight, just one of a multitude of national records to fall by the time day 1 of the South American Championships concluded. Archive photo via Mike Lewis/Ola Vista Photography

Day 1 of the South American Championships in Paraguay kicked off with a meet record in the very first event. 27-year-old Brazilian Manuella Lyrio crushed a 200m freestyle time of 1:58.94 to take the podium as 1 of just 2 swimmers in the field to dip beneath the 2-minute mark.

Right on her heels less than 2 tenths behind was Venezuelan Andreina Pinto, who stopped the clock in a mark of 1:59.08. Both women were outside the Rio automatic-qualifying time of 1:58.96, but Lyrio holds the South American record with the 1:58.03 she clocked last year, so today’s effort was less than a second from her career-best.

Argentine freestyle stud Federico Grabich followed Lyrio’s lead, taking the win in the men’s 200m freestyle, clocking a mark of 1:47.39 for a new meet record of his own. In fact, Grabich notched himself a new National National Record, lowering his old mark set at the 2015 FINA World Championships, where he earned a time of 1:47.43 for 11th place overall.

Venezuelan rival Cristian Quintero earned a new National Record of his own in the 200m freestyle, touching in a mark of 1:47.73, albeit in the morning prelims. His AM effort surpassed his own previous record of 1:47.88 clocked just last summer at the Pan American Games.  23-year-old Quintero opted out of contesting the event in the final to instead focus on his nation’s 400m freestyle relay, which meant Grabich had free reign over the night race. Both men’s 200m free outings today sit beneath the FINA A cut of 1:47.97, but rank outside the world’s top 20 performances.

Brazil came back for the gold in the men’s 100m backstroke, as 29-year-old Guilherme Guido crushed the field with a monster 53.40 to top the podium. That time clears the FINA A cut of 54.36 and signified the only sub-55 time of the race tonight. Guido won the 100m backstroke at this same meet in 2010, so the man has got some longevity among the competitors.

In the same race for the women, 25-year-old Brazilian Etiene Medeiros collected the win, stopping the clock in 1:00.38. Medeiros will need to rely on the Maria Lenk Trophy, Brazil’s 2nd Olympic-qualifying meet to nab the FINA A cut of 1:00.25, however.

In the silver spot tonight was Argentine athlete Andrea Berrino, who touched in 1:00.47 to represent the only other sub 1:01-swimmer of the field. For her efforts Berrino earned a new National Record, surpassing the old time of 1:01.04, which means tonight was the first occasion the 22-year-old ventured into sub-1:01 territory.

Both Virginia Bardach (ARG) and Joanna Maranhao (BRA) earned FINA A cuts in the women’s 200m IM event, touching in times of 2:13.46 and 2:14.09 for gold and silver, respectively. For Bardach, that time actually overtakes her sister Georgina Bardach‘s previous result of 2:14.23 to clock a new Argentine women’s record in the event. Georgina’s old record was set all the way back in 2009, the supersuit era.

Henrique Rodrigues (BRA) took the men’s 200m IM event in a time of 2:01.18, but the spotlight was on the runner-up finisher, Carlos Omana of Venezuela. Omana cranked out a tie of 2:01.87 to take silver and notch himself a new Venezuelan National Record, lowering that of his own mark of 2:02.92 from last year’s Pan American Games.

Macareno Ceballos (ARG) won the women’s 100m breaststroke in 1:08.46, which wasn’t enough to notch an Olympic automatic-qualifying time, but was speedy enough to knock off the old Argentine record of 1:08.76 set by Julia Sebastian from 2014.

For the men,Venezuelan Carlos Claverie, who also swims for the University of Louisville, unleashed a 100m breaststroke of 1:00.82 to log a new personal best and also destroy his old National Record of 1:01.62 from Nanjing.  Claverie’s effort today sits just under .3 of a second outside the FINA A cut of 1:00.57. He has already logged an Olympic-qualifying time in the 200m breaststroke at the Arena Pro Swim Series in Minneapolis.

Of note, 4th place finisher in the men’s 100m breaststroke race, Renato Prono from Paraguay, broke his nation’s record in the event, replacing the old mark of 1:02.32 with his new outing of 1:01.98. That represents the 2nd supersuit era record to bite the dust on just day 1 of this competition.

All told on the day, Brazil leads the medal count with 5 golds, 4 silvers, 5 bronzes for 14 medals total.

Guido time bodes well as he was with a real full beard. A 52 at trials is a possibility

Really can´t get why a downvote on this.. Personal hate?