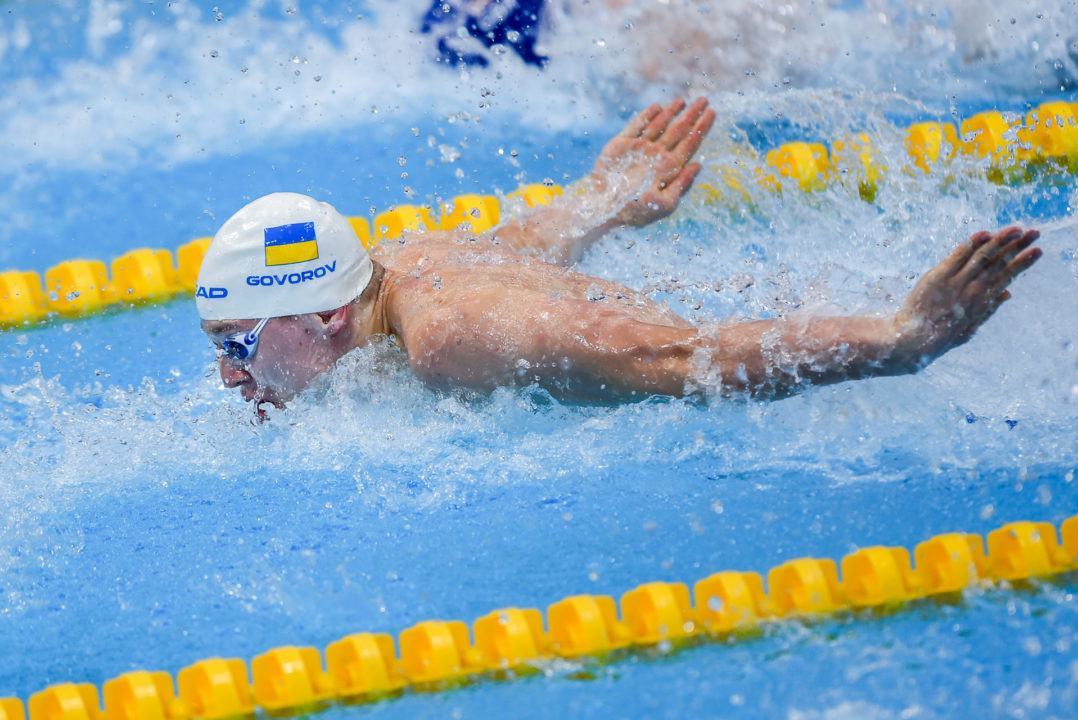 Andrii Govorov posted a 22.69 in the 50 butterfly at the French Open, which is the fastest textile swim in history... Current photo via Peter Sukenik/www.petersukenik.com

Japan’s Kosuke Hagino won a share of three event titles – including a narrow win over France’s Jeremy Stravius in the 200 free – on the second and final day of the 2016 French Open.

Hosszu, Peaty and Hoshi Just a Few of the Stars to Compete in Vichy

Just over a month ago Andrii Govorov of the Ukraine put up the world’s top time of 22.73 in the 50 butterfly in the semi-finals of the European Championships and today he surpassed that posting a 22.69 to win the French Open. Govorov’s time is both a French Open record, a new national record and the fastest textile swim in history.

Frenchman Frederick Bousquet finished second, over a second behind, posting a time of 23.73 followed by Joeri Verlinden of the Netherlands who hit the wall in a time of 24.26.

Katinka Hosszu did not take on the type of schedule that we are used to seeing, in fact the Hungarian only swum two events on the first day of competition, the 200 IM and 200 backstroke. Hosszu took the 200 IM with ease posting a time 2:08.93 setting a new French Open record. She was followed Runa Imai of Japan who hit the wall in a 2:12.34 and Fatine Lesaffre of France who finished in a time of 2:14.23.

Adam Peaty of Great Britain also set a new French Open record in the men’s 50 breaststroke taking the event in a time of 27.02. Peaty currently sits atop the world rankings having posted a time of 26.66 at the European Championships. Damir Dugonjic of Slovenia finished second in a time of 27.60 followed by Giacomo Perez Dortona of France who hit the wall in a time of 27.80.

Jazz Carlin of Great Britain took the first event of the evening winning the women’s 800 freestyle in a time of 8:24.59 finishing a second ahead of Anja Klinar of Slovenia who recorded a time of 8:25.68. Carlin was not far off her season’s best of 8:23.52 that she put up at the European Championships. Klinar’s Slovenian teammate Tajasa Oder finished third in a time of 8:29.11.

Kromowidjojo returned to the pool later in the evening to win the 50 freestyle in a time of 24.47 just one one-hundredth of a second ahead of Fran Halsall of Great Britain. Anna Santamans of France finished third in a time of 25.09.

Kosuke Hagino of Japan took the 400 IM in a meet record time of 4:10.88. Hagino, who sits atop of the world rankings having posted a time of 4:08.85 in May, won the event with ease finishing over five seconds over Hungarian David Verraszto who touched in a time of 4:15.89. Diogo Larvalho of Portugal finished third well behind Verraszto hitting the wall in a time of 4:24.17.

Frenchman Camille Lacourt won the men’s 100 backstroke by almost a full second touching in a time of 53.99. Lacourt was just over a second off his season’s best of 52.97. Christoper Walker-Hebborn of Great Britain finished second in a time of 54.92 followed Radoslaw Kawecki of Poland who finished in a time of 55.05.

200 butterfly world champion Natsumi Hoshi of Japan won the women’s 100 butterfly in a time of 58.96. Hoshi was followed by Marie Wattel of France who posted a 59.03 and Ann Ntountomnaki of Greece who recorded a 59.08.

Three Frenchmen went one, two, three in the 100 freestyle. Jeremy Stravius took the event in a time of 48.79 followed by Florent Manaudou who recorded a 49.07 and Clement Cute who hit the wall in a time of 49.12.

Other winners on the first evening included:

Clement Cute 😆
Jeff, it’s Clément Mignon. I don’t know if you used Google Translate but his name has been translated into English. Funny. 🙂

Need to get all the 50s in the Olympics.

Oh Bobo give it a rest.