Glenn Snyders Races To Rio In 100 Breast at NZ Trials 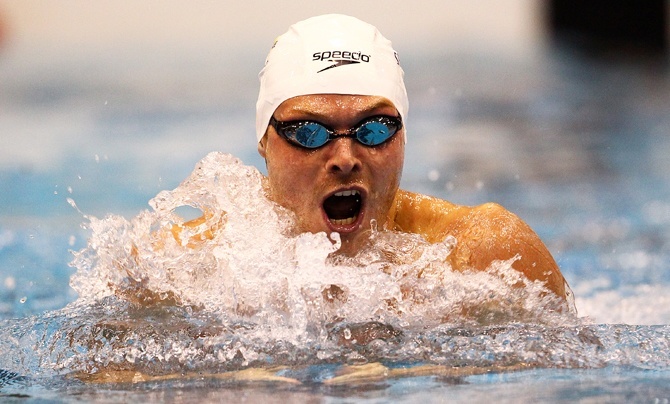 Glenn Snyders notched a spot on the Kiwi roster for Rio, which will mark his 3rd Olympic Games appearance. Archive photo via Justin Arthur/www.bwmedia.co.nz

If multiple National Records and Rio-qualifying times weren’t enough excitement thus far at the New Zealand Olympic Trials in Auckland, then a World Record during tonight’s finals session was surely enough to put the thrills over the edge. Several more swimmers most likely punched their tickets to Rio during day 4 of the 5-day meet, while para-swimmer Sophie Pascoe rocked a new world mark to highlight the session.

As a reminder, the New Zealand Olympic Trials is one of two qualifying meets for Rio. The 2nd qualifying event for Kiwi swimmers is the Canadian Olympic Trials, which are slated for April 5th through April 10th. Swimming New Zealand nominations will be forwarded to its Olympic Committee for considerations following the Toronto meet, with the entire roster expected to be named on April 15th.

New Zealand national record holder Glenn Synders came painfully close to clocking Rio-qualifying time in the men’s 200m breaststroke on day 2 of the meet, but the Trojan Swim Club-trained athlete got the job done tonight. In the 100m breaststroke sprint race, Snyders stopped the clock at a swift 1:00.36 in prelims, then lowered his morning swim significantly with a season-based of 1:00.08 to take the gold in finals.

For Snyders, his national record stands at the 59.78 he registered at the 2012 Olympic Games, so his time this evening was within half a second of his lifetime best. 1:00.57 was what Snyders needed to automatically qualify for Rio, so the 28-year-old North Shore Swimming Club veteran slid comfortably under that mark to claim a roster spot.

Not hiding his excitement, a post-race Snyders said, “I am absolutely rapt with that [prelims] swim. I just wanted to go faster tonight. I haven’t had the best build-up with injury coming into the trials and having not raced much. I didn’t know what to expect.”

Giving a nod to the fact he’ll be participating in Rio as a multiple Olympian, Snyders added, “I guess this shows that my determination and perseverance over 15 plus years in the sport has paid off and to join the likes of Helen Norfolk, Dean Kent and now Lauren in three Olympics is special.”

Also on the men’s side, Matamata Swim Club’s Matt Stanley scored his 2nd Olympic-qualifying time of the meet, doubling up on his earlier 200m freestyle victory with a win in the 400m distance. After earning the top seed in prelims with a mark of 3:53.96, Stanley shaved close to 5 seconds off his swim to register a gold medal-winning time of 3:49.01. The FINA A cut sits at 3:50.44, so Stanley’s outing was fast enough to dip beneath that threshold.

Sparks flew in the paralympic realm in the form of Sophie Pascoe absolutely crushing her world record in the women’s S10 100m butterfly. Hacking more than a second off of her previous world record mark of 1:03.72 set last year, Pascoe scored a new World Record of 1:02.60 to take the gold.

“I was surprised to get down into the 1:02s, I was hoping for a 1:03 low. When I saw 1:02.60 I was pleasantly surprised but I wanted a strong nationals to show all the others beginning their nationals that I am on form for Rio coming up in five months time,” said Pascoe after the race.

“Now it is head-down and bum-up and try to get under that again in Rio. It is now all about hard work and dedication. I only have one thing on my mind and that is achieving my goals in Rio.”

Young gun Gabrielle Fa’amausili earned her 2nd victory of the meet, adding a women’s 100m backstroke win to her gold earlier in the 50m event. She was one of two 16-year-old swimmers who finished 1-2 in the race, as Fa’amausili’s time of 1:00.83 was only .02 of a second ahead of Howick Pakuranga swimmer Bobbie Gichard, who touched in 1:00.85. Both women remain over a half second outside of the FINA A cut of 1.00.25, and just miss making the Rio roster in the event. But, it does give the Kiwis a good outlook for the 2020 Tokyo Olympics, when both women would be just 20 years old.

Tomorrow, Friday, April 1st marks the final day of competition in Auckland, with prelims resuming at 10am.