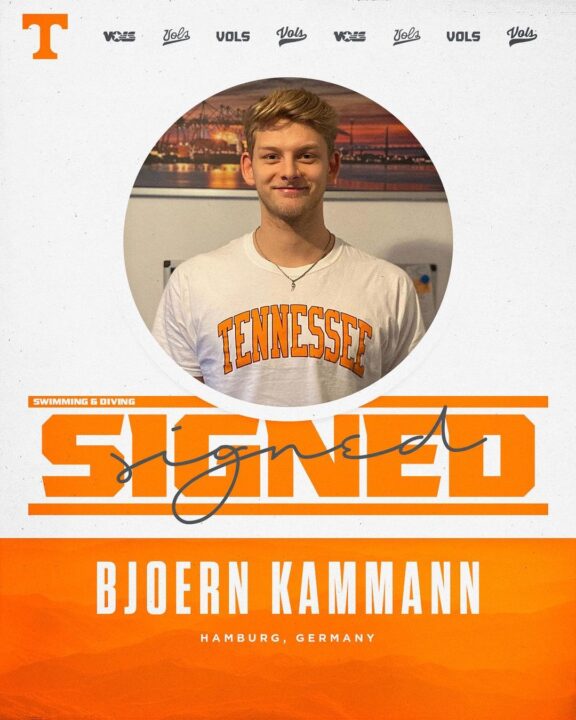 Bjoern Kammann, who has represented Germany at multiple European Championships and the 2019 World Junior Championships, will join Tennessee for the spring semester. Archive photo via Tennessee Athletics

The University of Tennessee men will pick up a mid-season boost in January with the addition of versatile German swimmer Bjoern Kammann to their roster. Kammann comes from Hamburg, where he swims for the club AMTV-FTV Hamburg.

Kammann was a member of the German team that competed at the European Aquatics Championships earlier this year. There he swam the 100 free, placing 50th in prelims, the 100 back, placing 37th in prelims, and 100 fly, placing 33rd in prelims. He also swam the backstroke leg on the team’s 400 medley relay, which placed 8th.

He has represented his country at a number of international meets, including the 2019 European Short Course Championships and the 2019 World Junior Championships.

If conversions hold, Hammann will be an immediate upgrade on the backstroke leg for Tennessee. At the mid-season Tennessee Invite two weeks ago, Tennessee’s leadoff leg on their “A” 400 medley relay was a 48.28 split from sophomore Harrison Lierz. The other legs where he excels featured a 46.32 butterfly split from Kayky Mota and a 42.67 freestyle leg from Jordan Crooks.

That “A” relay touched in 3:08.57, but was disqualified on an early departure from their breaststroke leg.

The Tennessee men finished 3rd at last year’s SEC Championship meet, though Texas A&M and Alabama were less than 10 points back. Florida won the title 550 points ahead, and Georgia was about 65 points behind that.

Tennessee starting to bring in some big boys!

That 50fr time was a split en route to a 100 time. He has been under 24s on the front end of 100s previously too, so a much handier sprinter than he seems at first glance too. Great pick up.

Wow a great one for the VOlS! Germany, Bulgaria, South Africa, Spain, Brazil, Canada, Norway and Somalia…are there any Americans there??

Quick glance at there roster reveals no one from Spain, Norway or Somalia. But there are a few US National Teamers