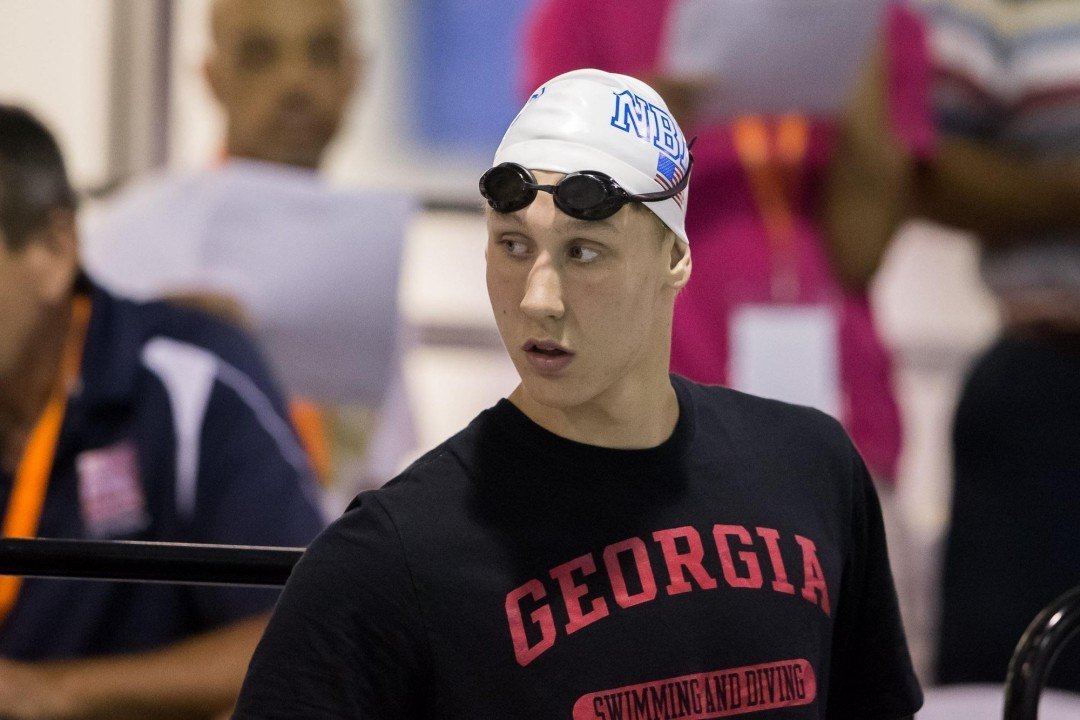 Georgia Bulldog and USA National Teamer Chase Kalisz  will be redshirting the upcoming 2015-16 collegiate swimming season to focus full attention on his preparation for the 2016 Olympic Trials. A spokesperson at the University of Georgia confirmed that although Kalisz’s decision has just been made official, the possibility of his sitting out this upcoming season was mentioned as early on in his recruitment to the Bulldog squad and he has the full support of the Georgia staff.

Kalisz will return to his prep training group at the North Baltimore Aquatic Club under the tutelage of Bob Bowman, with whom he’s spent time training throughout his Georgia career. Bowman has recently accepted a job to become the new head coach of the NCAA team at Arizona State, and Kalisz will follow Bowman there after this summer’s World Championships.

Kalisz initially made a name for himself at the 2012 Olympic Trials, where, at 18-years old, found himself finishing 5th in the 200m IM behind the likes of powerhouses Michael Phelps, Ryan Lochte, Conor Dwyer, as well as Austin Surhoff.  In his signature race, the 400m IM, Kalisz finished in 6th place overall behind Lochte, Phelps, Tyler Clary, Andrew Gemmell, and Michael Weiss, resulting in Kalisz as being considered “one to watch” in these events in the near future for the U.S. He trained in the leadup to that meet with Michael Phelps, the greatest 400 IM’er in history and one of the two men who took a spot in the event at the 2012 London Olympic Games

Later in 2012, Kalisz had his first successful run into international competition by winning both the 200m IM and 400m IM events at the Junior Pan Pacific Championships.  He immediately followed that up with a silver medal in the 400m IM event at the 2013 FINA World long Course Championships, earning him USA Swimming’s Breakout Performer of the Year Award.

2014 saw Kalisz flourish on the NCAA scene as well. He earned a runner-up finish in the men’s 200m IM event at the 2014 NCAA Championships, but the highlight was an individual victory in the 400 yard IM event that set a new NCAA record and American record in the process – his second-straight championship.  Kalisz also cranked out a bronze medal in the 400m IM at the 2014 Pan Pacs in Australia in long course.

As well as Kalisz performed in the 2013-14 college season as well as internationally, his junior year at Georgia did not follow the quite same successful path.  Kalisz did pull out a 2nd place finish in the men’s 400 IM at the 2015 NCAA Championships, but was well off of his record pace from the season prior, and failed to make the final in the 200 IM.

With the 200m IM field filled to the brim with likely top spot candidates including Michael Phelps, Ryan Lochte and David Nolan, the 400m IM continues to be Kalisz best shot at making the 2015 Olympic squad. At last year’s U.S. Summer Nationals, Kalisz managed a silver medal behind Clary, but will see himself contending against such young guns as Andrew Seliskar, Josh Prenot and Sean Grieshop if he wants to secure his spot for Rio. In his three seasons so far at Georgia (with split summers home with Bob Bowman at NBAC), he has made big improvements in all of his 200 races, and could contend for spots in the 200 fly and 200 breaststroke if he puts focus on the events.

Fun fact: Dylan carter and Santo Condorelli of USC will also sit of next season to prepare for Olympics.

Will they continue to train at USC?

Dylan will continue to train at USC from what I know. Santo will train somewhere else in California with an old coach

Good call for Santo… Swim Canada Trials 9 days after Mens NCAAs. Makes me wonder about Britt Maclean as well… she is staying in Toronto to recover from injury this summer. Yes she is on the Pan Am team buts its a home city meet with close access to the support she needs to recover.

Well, now we know Phelps and Kalisz will be moving to AZ this summer. I’m assuming Schmitt will too, but I haven’t heard anything official. Does anybody have any more info?

Also, we know Kalisz, Ledecky and Weitzel from the US will be training full time for Olympic Trials next year. Does anybody know about any other student-athletes who represent the US internationally who will be taking next year off?

^^^^agree. who cares? he swam poorly at ncaa’s….really bad for him…..he was crazy not to go back home. i don’t see him beating the japanese but do see him as the best american 4imer. he didn’t have the best summer last year either, so he needs to step it up his training if he wants to keep up.

Not a surprising move. Easier move for someone who has had success on the international stage already, whereas someone who has yet to break out, specifically in long course, probably wouldn’t take the risk. Someone like a Jack Conger or Will Licon who certainly have potential to make the team, but wouldn’t run the risk of missing a year of school when they haven’t yet proven to be a top tier long course performer.
400 IM will be a fun event at Olympic trials, with Clary and Kalisz along with up and comers Andrew Seliskar, Josh Prenot and Will Licon closing in. And of course I would never count out Ryan Lochte, since he has previously stated he loves… Read more »

Haven´t heard about Bentz after Jr Worlds.. how was he at World Trials and latest LCM results?

Not sure if this is a good idea for many of the men. ONly 2 college swimmers made the Olympic team in 2012 and both in the 1500. guess you gotta go for it though

I understand you’re talking about male college swimmers, and the US Men’s Team does seem to be getting older, but I think people make decisions based upon examples they’ve observed in life. It would be natural for Kalisz to grow up emulating Phelps and having confidence in Bob’s ability to get him to the Olympic podium like he did with Michael. Remember also that Allison Schmitt (from the same college program) took a red-shirt year to prep with Bob, and that worked out very well!

Personally, I hope Bob forces him to swim backstroke non-stop for a year so he doesn’t have to try to come back from so far behind in his 400 IM races! 😉