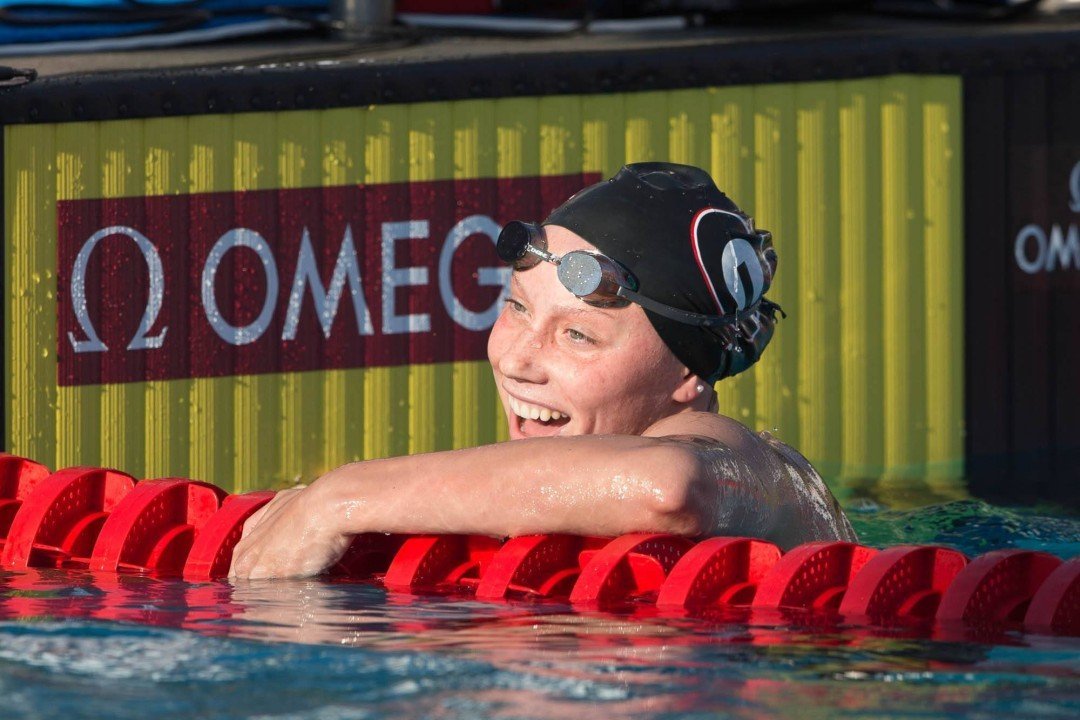 After one event of the 2016 Women’s NCAA Division I Championships, Georgia leads the field with 40 points. The Georgia team took the win in tonight’s 800 free relay in 6:51.80, led by Hali Flickinger and Brittany MacLean.

This marks the team’s eighth-ever 800 free relay win after their championship dominance in 2010-2013 (led by names such as Morgan Scroggy, Megan Romano, Allison Schmitt, and Shannon Vreeland), a pair of win in 2005 and 2006 (team members included Mary DeScenza, Kara Lynn Joyce, and Amanda Weir), and a championship in 2001.

As far as splits go, MacClean, Flickinger, Leah Smith, and Ella Eastin were the stars of the show. Below is a chart of the fastest splits of the night, with each swim marked either “Relay Start” (RS) or “Lead Off” (LO):

With this analysis, we can get a bit of a preview of what’s to come in the individual 200 later this weekend. While some of the quick swims were certainly expected (Comerford, Smith, Flickinger, Vose, and Haughey are seeded 2nd through 6th in the 200), MacClean, Chelsea Chenault, and Haley Lips all made huge strides from their individual 200 seeds. MacClean is seeded 8th with a 1:43.64, Chenault is seeded 15th with a 1:44.62, and Lips is 9th with a 1:44.14.

Notably, top seed Lia Neal of Stanford did not swim the relay. She comes into the event with a seed time of 1:42.50, which, even adjusted for a relay start, may not be fast enough to hold off MacLean. These results also bode well for Ella Eastin‘s upcoming meet, despite the fact that she isn’t even swimming the individual 200 free this weekend (she’ll take on the IMs and the 200 fly, where she is seeded 1st, 1st, and 2nd). Sarah Gibson is also sitting out the individual event in favor of the 500 and the fly events, while Amy Bilquist will take on the 50 free and the backstrokes.

There’s a lot more swimming to come this weekend, but Georgia now tops the team scores, followed by USC and Cal. Texas A&M made the biggest and most notable jump from their seed, going from 10th to 5th in the relay.

Ella Easton is winning the IMs, to well rounded with that split.