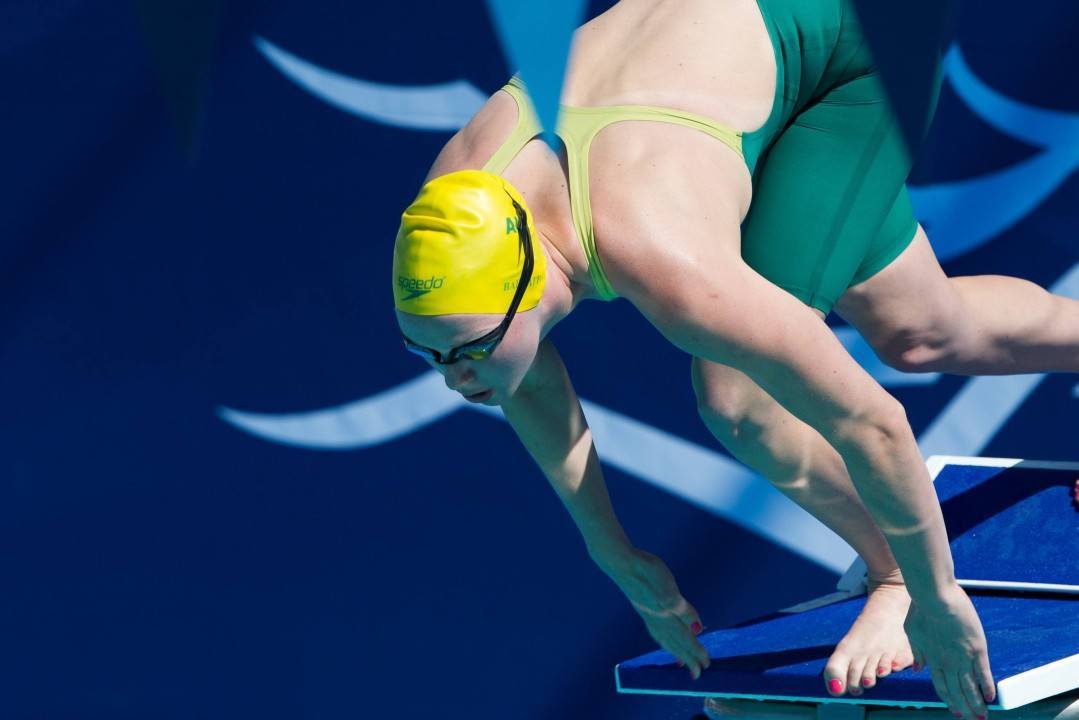 After a summer hiatus filled with adventures both in and out of the pool, the time is getting close again... Current photo via Tim Binning/TheSwimPictures.com

After a summer hiatus filled with adventures both in and out of the pool, the time is getting close again when our favorite Division III athletes will return to the big respective puddles that serve as home. The Division III scene is – as one might imagine – quite different from those experienced by the athletes competing for Division I and II schools. Academics come first before we ever hit the pool, but when they do… That my friends is what this sport is all about: swimming fast, having fun, and battling to go out on top.

At the conclusion of the 2013-14 season, everything ended with victories by the Emory women and the Kenyon men. Going into the new year, everything is subject to change. Here’s a glance at who graduated (taken from the top 16 at NCAAs the previous year) and who we can look forward to having back from our top ten teams on the men’s and women’s sides. Individual event champions are in bold.

Seniors lost: Courtney McDermott, Sadie Nennig, Kylie McKenzie, Brooke Woodward, Sarah Greene (diving)
Returning: Liz Arnoff, the Eagles’ sole NCAA champion last year will be a junior this year returning to help lead a new group of premier breaststrokers. She will be joined by two others from the amazing Emory 1-2-3 sweep in the 200 breaststroke at NCAAs: Megan Beach will be a senior this year and Annelise Kowalsky will be a freshman as the Eagles seek to continue their dominance at the national level.

Seniors lost: Sydney Lindblom, Rachel Flinn, Hillary Yarosh
Returning: Maria Zarka will be back for the Ladies competing on diving after her adventures representing Tonga at the Commonwealth Games this summer. Zarka has won the 3 meter dive for the past two years and looks to make it three in this season as a junior. Another national champion returns for the Ladies in Celia Oberholzer who has won the 100 backstroke for the past two years and will be entering her senior year this fall. Mariah Williamson – a junior – will join the duo as a jack-of-all-trades, gunning for some impressive performances in her freestle, IM and butterfly events.

Seniors lost: Sarah Rinsma, Kylie Ternes, Taylor Kitayama
Returning: While the Blue Jays lost some outstanding performers from last year’s NCAA squad, they will also be welcoming back the 2013-14 NCAA Female Swimmer of the Meet in multi-time national champion senior Anastasia Bogdanovski. Bogdanovski not only holds school records in the events she won at the 2014 NCAAs (50 and 200 freestyle), but also holds the national records for the 50 and 100 m freestyles in her adopted home country of Macedonia. Senior Sam Fox will also be back to lead a contingent of IMers and backstrokers after a 4th place finish in the 200 IM, 11th in the 400 IM and 10th in the 200 backstroke. Sophomore Abigail Brown will also return after having placed 9th in the 200 butterfly last year with a time that could have earned her 7th in the A final.

Seniors lost: Natalie Lugg, Morgan Nuess, Tully Bradford
Returning: Michele Howell will be a senior this year for Big Red and looks to lead a strong contingent of IMers and butterfliers in the coming year. She will be joined by sophomore teammates Cambell Costley and Carolyn Kane in covering all the distances of freestyle from the shortest sprints up to the mile.

Seniors lost: Alyssa Levine, McKenzie Murdoch (diving)
Returning: Sarah Thompson returns for her senior year with the Ephs after having captured NCAA titled in the 500 and the mile (yet again). She has a little bit of unfinished business after having a runner up finish in the 200 freestyle but will give us a dogfight this year at NCAAs to take it. Megan Pierce – now a sophomore – returns to the scene after winning the NCAA title in the 400 IM last year.

Seniors lost: Lauren Belak, Allison Merz, Kaitlyn Linsmayer (diving)
Returning: Junior (and NCAA champion in the 200 IM) Emily Hyde is back to guide the Jeffs in the coming season along with her yearmate, Sarah Conklin, a seasoned butterflier.

Seniors lost: Alissa Tinklengerg
Returning: The returning members of the 4th place 200 freestle relay from Nationals this year include senior Catherine Olson (10th in the 100 freestyle), junior Tarin Anding and sophomore Danielle Klunk. Also lending strength and guidance will be the steady breaststroker Jenny Strom who was 9th in both the 100 and 200 last year.

Seniors lost: Anh Chi Phan
Returning: Distance swimmer and IMer Sara Taege will return for the Bears after placing 6th in the 400 IM and 8th in the 500 freestyle at the 2013-14 NCAA Championships. Taege will be a senior this year.

Seniors lost: Christy Rogers, Joanna Yeh
Returning: Returning to the Engineers to lead in the coming season are junior Lena Yang (10th at NCAAs in the 50 freestyle) and sophomore Sarah Osmulski (8th in the 200 butterfly at NCAAs).

Seniors lost: None
Returning: Abby Erdman returns next year for the Maroons as a sophomore. She captured victory in the 200 butterfly in the 2013-14 season as Chicago’s highest finisher and took fourth in the 100 as well as serving on four of the five relays. Joining her in leading the young team is another sophomore: Alison Wall, a 14th place finisher in the 200 freestyle and 7th in the 200 backstroke.
Returning National Champs to keep an eye on:
100 butterfly – Junior Kierstin Nitz of Wheaton, IL reset the NCAA record.
200 backstroke – Junior Clare SLagel of Luther.

On the men’s side the title battle was close again last year, with a come from behind victory from the Lords in the final relay. See how the points they lost to graduation stacks up for this coming season.

Seniors lost: Andrew Chevalier, Alex Beckwith
Returning: The Lords have several top guns returning this year including national champions Austin Caldwell (200 freestlye) and Harrison Curley (200 backstroke). For both Caldwell and Curley this year marks their graduation year. Also returning this year will be rising sophomore Trevor Manz who was third in the 400 IM, took 5th in the 100 breaststroke and tied for 3rd in the 200 breaststroke.

Seniors lost: Al Weik, Carlos Maciel, Spencer Fronk
Returning: Big Red makes no secret of the points it garners from its high quality divers and in his senior year, National champion and NCAA record holder Connor Dignan will be back to shepherd the team as they aim to regain the NCAA title in the coming year. Dignan will be joined on the boards by junior Ben Lewis who was runner up on 1 meter and 8th on 3 meter. Junior Ryan Fleming will lead the charge in the water. He finished 4th in the 50 and 8th in the 100 freestyle.

Seniors lost: Ross Spock, Ryan Bass, Jacob Stephens
Returning: Junior Andrew Wilson (5th 200 IM and 2nd 200 breaststroke) will be back for more for the Eagles this season after being the second one under the NCAA meet record in the 200 breaststroke this past season. Wilson competed at the USA Senior National meet this summer, placing 14th in his 50 breaststroke and top 30 in both the 100 and 200 breaststroke as well. He is joined by senior teammate Hayden Baker who was 11th in the 100 butterfly at the 2014 NCAA championships.

Seniors lost: Anthony Lordi, Will Kimball, Joseph Acquiviva
Returning: After crushing school records right and left as a freshman, Andrew Greenhalgh will be back next year as a sophomore to continue his dominance in the distance freestyle. With his only national competition in the mile graduated, it’s possible Greenhalgh will be bringing home more gold at the end of next season. Another wild child sophomore will join him next year: Evan Holder who executed the difficult 500-200IM double the first night of NCAAs with 15th and 11th place finishes, respectively.

Seniors lost: Michael Liao, Remy Mock
Returning: Austin Fatham will be a senior for the Engineers in the coming season. He was 7th in the 50 and 9th in the 100 freestyle at NCAAs. Juniors Alex Lednev (16th in the 200 IM, 12th in 400 IM) and Luke Schlueter (7th 200 butterfly) will also be in attendance trying to whip MIT’s huge class of freshman into shape for the upcoming season.

Seniors lost: None
Returning: Matt Williams gained some notoriety last year as a freshman by making two A cuts with the newly acquired “impossible” standards. He placed third in the 100 and with some more experience under his belt going into next year might have a surprise or two in store. Returning on the boards will be senior James Stevick who picked up a 3rd place finish on 1 meter at NCAAs.

Seniors lost: Sean Sutherland
Returning: As a freshman Ben Lin was 3rd in the 200 backstroke at the 2014 NCAAs. Senior Chris Gronbeck who finished 9th in the mile at NCAAs will also be back to guide the Ephs.

Seniors lost: Drew Ledwith, Jared Hyde, James Black
Returning: Shahar Resman enters his junior year after coming from Israel to the USA to swim for the Owls. At the NCAA meet this past year he picked up 5th place in the mile and the 500 freestyle.

Seniors lost: Eric Hallman
Returning: Matt Staab will be back on the boards for the Maroons this year as a senior. Last year he secured a 7th place finish on 3 meter at the NCAA meet. In the water we will also see sophomore Kevin Ku who picked up an 11th place finish in the 200 butterfly the past year, as well as junior Matt Veldman who was 14th in the 100 butterfly.

Any teams outside the top 10 from last year likely to break in?