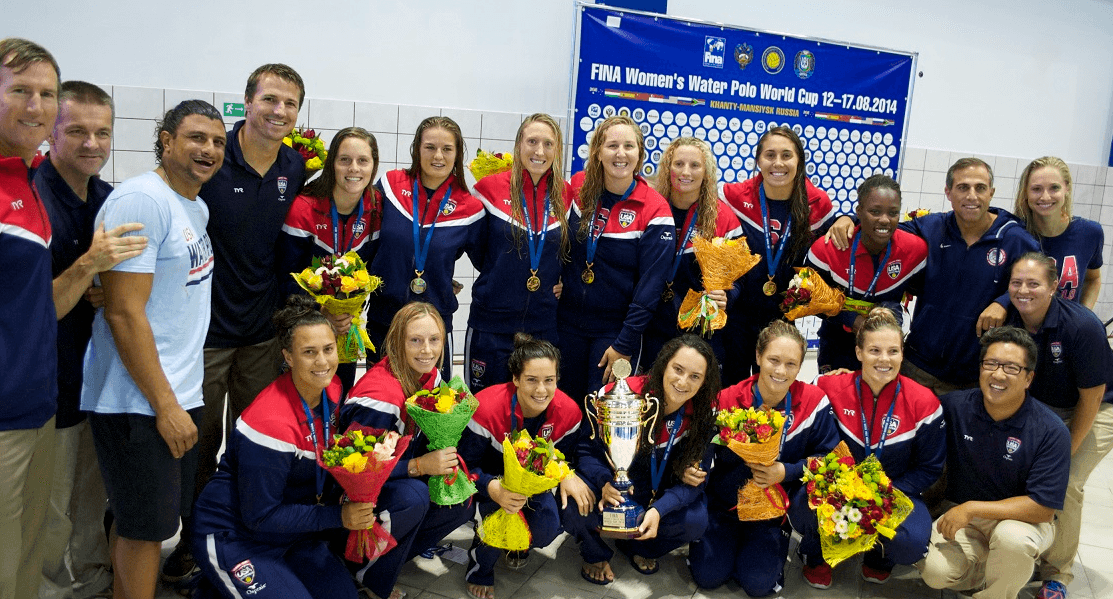 Coach Kirkorian: "We got off to a great start. The combination of our defense and Sami's outstanding performance in the cage was huge. The difference for us today, as it was for the whole tournament, was our execution in six on five and five on six situations."

After a little over a year away, the USA Water Polo Women’s Senior National Team is once again on top of the international water polo world. The USA Women won their second straight FINA World Cup title with a 10-6 victory over Australia and with it ascended to the number one ranking in FINA. Powered by three goals from Melissa Seidemann (Walnut Creek, CA/Stanford/NYAC) and 16 saves from Sami Hill (Santa Barbara, CA/UCLA/SBWPF) in the title match, the United States earned their third World Cup title in program history. Hill and fellow goalkeeper Ashleigh Johnson (Miami, FL/Princeton/Gulliver Riptides) took turns in goal for Team USA all tournament long. For her efforts Johnson was named the tournament’s top goalkeeper despite not playing in the title game. For Team USA, the title joins World Cup crowns from 1979 (Merced, CA) and 2010 (Christchurch, New Zealand), the latter also a title game victory over Australia. For complete tournament results, visit the official FINA website by clicking here.

“I’m very proud of this team’s preparation, focus, and attitude throughout this tournament and the entire summer. It’s a fun group that truly enjoys each other’s company. They are inspiring to watch because they play like young kids who are in love with the sport and competition,” said USA Head Coach Adam Krikorian following the medal ceremony.

Australia opened the match with a goal to grab a 1-0 lead but the United States had an immediate answer scoring three straight goals to close the first period ahead 3-1. The United States scored the first goal of the second period to build a 4-1 advantage before Australia stopped the run with a goal. That did little to slow the Team USA offense as they added three more goals in the period and eventually held a 7-3 lead at halftime. Australia battled back in the third period drawing to within 7-5 with 4:31 to play before the United States hit the accelerator again and quickly went up 10-5 by the end of the quarter.

Australia would muster a final goal in the fourth period but the work was done for the United States as they came away winners 10-6. Team USA went 5/7 on power plays and 1/1 on penalty shots while Australia was 3/10 on power plays and 0/1 on penalty shots. Other goal scorers for the United States included Courtney Mathewson (Anaheim Hills, CA/UCLA/NYAC) and Kiley Neushul (Goleta, CA/Stanford/SBWPF) who scored two goals each along with the trio of Rachel Fattal (Seal Beach, CA/UCLA/SOCAL) Maggie Steffens (Danville, CA/Stanford/Diablo), and Kami Craig (Santa Barbara, CA/USC/SBWPF) scoring one goal each.

“We got off to a great start. The combination of our defense and Sami’s outstanding performance in the cage was huge. The difference for us today, as it was for the whole tournament, was our execution in six on five and five on six situations,” added Krikorian.

Along with being named top goalkeeper Johnson joined Craig on the 2014 FINA World Cup Media All-Star Team. Australia’s Rowie Webster was named tournament MVP while Hungary’s Rita Keszthelyi was the tourney’s top scorer. The victory capped an undefeated week for the United States who earned two wins over Australia along with victories over South Africa, Hungary, and Singapore.