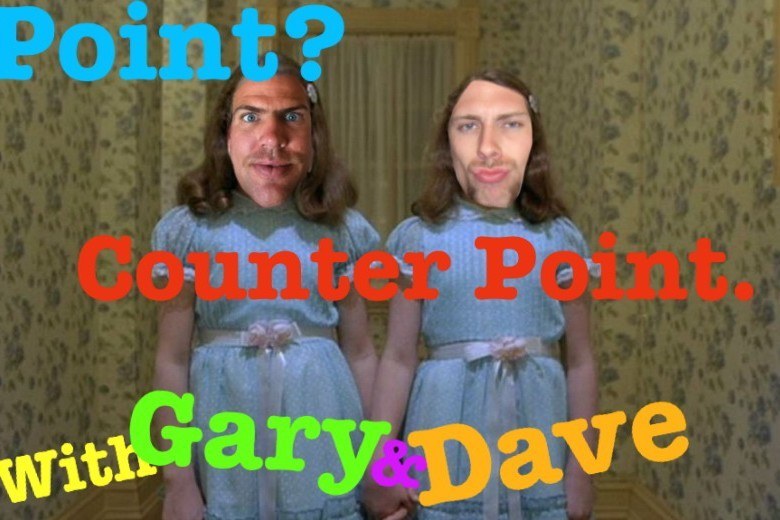 David: Could you please refer to me as "Writing Partner to Olympic Hall of Famer Gary Hall, Jr."? I hate to be a stickler here, but it's just a basic respect thing.

Gary: So what’s our subject today?

David:  Could you please refer to me as “Writing Partner to Olympic Hall of Famer Gary Hall, Jr.”?  I hate to be a stickler here, but it’s just a basic respect thing.

Gary: It is a tremendous honor. You can poke fun at it if you want but I have to be respectful.  By the way, never let fear stand between you and your dreams, Dave.

David: Okay. What do we do to celebrate you being inducted into the Hall of Fame?

Gary: It wasn’t easy. It was worth it.

David: I’m not sure if we’re talking about the same thing.

David:  Wait, I asked you how we celebrate your amazing honor.  And you are just responding with canned motivat…

Gary:  Dave, if you can consistently outperform the person next to you, eventually you will be the best in the world.

David: Is this going to keep going?

Gary:  First say to yourself what you would be, and then do what you have to do.

Gary: You Googled that. Yeah, I plagiarized that one. But I did live it too.

David: Gary, all you have to do is follow three simple rules. One, never underestimate your opponent. Expect the unexpected. Two, take it outside. Never start anything inside the bar unless it’s absolutely necessary. And three, be nice.

Gary:  Road House? Really? I give you Epictetus, and you give me Road House? Please don’t ruin this day for me.

David: I agree, I was out of bounds.

David: Anyway man, since no one is reading the column anymore, I can switch off the sarcasm.  As someone who always enjoyed watching you swim, I wanted to say congratulations.

What is it like being recognized alongside all Olympians, not just swimmers? That is, do you think it means more or less than all the swimming-specific accolades you’ve received?

Gary: In all seriousness, this is a huge honor. One that I am truly humbled by. I am appreciative beyond words.

I heard a statistic recently that if you are a competitive swimmer in the United States that there is a .00014% chance of making one Olympic team. I made three Olympic teams and am one of nine swimmers in the history of the sport to be inducted into the Olympic Hall of Fame. What can I say? I’ve always pressed my luck.

Outside of my Olympic medals, I have hardly any accolades in the sport. I have less medals from US Nationals than I do from the Olympics.

David: Why is that?

Gary: It’s going to sound funny, but I absolutely hated fame. I still do. So much so that I wouldn’t go to swim meets because of it. Just because NBC said that I love the limelight doesn’t make it true. I never attempted to tell people this but the persona of Gary Hall, Jr. at the Olympics was simply that, a persona consciously created for a very private person to hide behind.

Most elite level swimmers attend more swim meets in two World Cup circuits than I attended over a 15 year professional swimming career. Outside of an Olympic year I would disappear.

I will admit that I thought that the “performance” at swim meets was a lot of fun, and funny. And the fact that it made people really, really mad made it even more funny to me.

Anyway, the end result was that I have a bunch of Olympic medals, and very little else to show from a long career in the sport of swimming. I would turn out for the Olympics, and that was really all I cared about. Which makes being recognized by the Olympic movement all the more special to me.

David:  Are you planning on taking the fam out to the ceremony with you?

Gary: June 12th in Chicago. Yes, I’ll be there with my wife and kids, my parents and my in-laws.

David:  What about your dad, what has he had to say about this?

Gary: I think this induction means more to my parents than to me, and that’s not belittling my appreciation.

David:  This is all amazing stuff my friend. And, well, sorry to do this but I have two kind of stupid questions…but I promise it’s because I’m an idiot, not because I am not really happy for you.

First, have you sent Mel Stewart an email pointing out you’re in and he’s not?

Gary: No. Maybe it’s just that I can’t see how that might be funny.

Gary: Both are true legends. And neither one was button down. To be a legend, to blaze a trail, it takes a formula of courage, determination, general bad-ass-ness and a repugnance of formulas.

If I had to pick one? Duke. I’ve heard stories of how he lived out his days as a Waikiki Beach Boy after his Olympic success. Legendary. An inspiration. Watch this video and tell me you aren’t inspired. Who’ll join me?!

Johnny fell pretty hard to the bottle in the end. But both captured “lifestyle” in admirable ways. They were characters. I’d like to retire as an ambassador of lifestyle one day, like those guys.

David: I can’t think of a better way to end this one, can you?

my 2-cents… Johnny. (I was Tarzan fan as a kid…still am….and, yes, I’m jealous GHJ is a hall of famer!) Congrats Gary. It’s about time you were recognized for your long Olympic history and success. Well-deserved.

If only some of those parking lot fights had been during the days of iphones and youtube. any way you could re-enact one? and maybe wear the cool american flag Rocky 4 shorts too?

During my HOF induction speech, it will take me 491 seconds to re-enact out all 10 of my Olympic medal winning swims in their entirety. That’s a little over 8 minutes of “air” swimming. I will also re-enact the scene from Roadhouse, where Patrick Swayze rips out an esophagus. This is almost exactly how things went down back in high school. Any esophagus volunteers, David Cromwell?