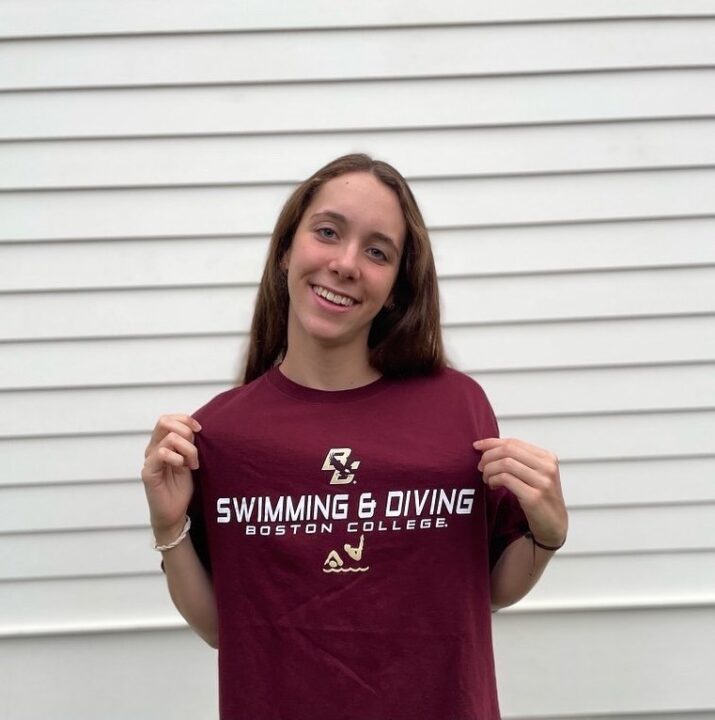 A North Carolina high school state finalist, Burgess will become an Eagle when she arrives on the Boston College campus next fall.

Heading up the East coast from her hometown of Raleigh, North Carolina, Stefanie Burgess has announced that she will be joining the Boston College swim team beginning in the fall of 2022. Burgess attends Cardinal Gibbons High School and swims club with the Marlins of Raleigh.

Just a few weeks after the high school state championships, she competed at the Sectionals meet in Cary. There, she swam to new best times in the 100 back, 100 and 200 fly, and 200 IM. In the IM, she qualified for C-finals, having placed 18th during prelims with a time of 2:06.06. During finals she took over a second off of that time, touching in 2:04.94 for a new lifetime best and 20th place finish.

Racing the same event in the long course pool, Burgess was able to make it into finals of the event at the Futures Championship meet in Huntsville. There, she finished in 2:19.49 in finals for a new personal best time and 25th place overall finish.

The Boston College women are coming off of a season that saw them finish last out of the 12 teams at the 2021 ACC Swimming and Diving Championships. The Eagles were led by Haley Dolan, a junior on the team who qualified for the C-final of the 50 free. Dolan, who will have graduated before Burgess arrives on campus next fall, finished 22nd. Dolan was one of two members of the team to qualify for the US Olympic Trials this summer. In the butterfly events, Burgess will get to have one year of overlap with one of the program’s top swimmers, Mary Kate Gannon. Gannon led the program in the 100 and was second in the 2o0 last year within the team.

While Boston College wasn’t able to move out of the last place position at the conference meet, their score was notable. Their 177 points is the most the team has scored at the meet in recent years. Dolan was the first woman to score individually at the meet for Boston College since 2017.

Joining Burgess as members of the class of 2026 will be Ella Derby and Emma McNulty.