From Popov to Popovici: A Look Back at Amazing 100 Free Back-Half Splits 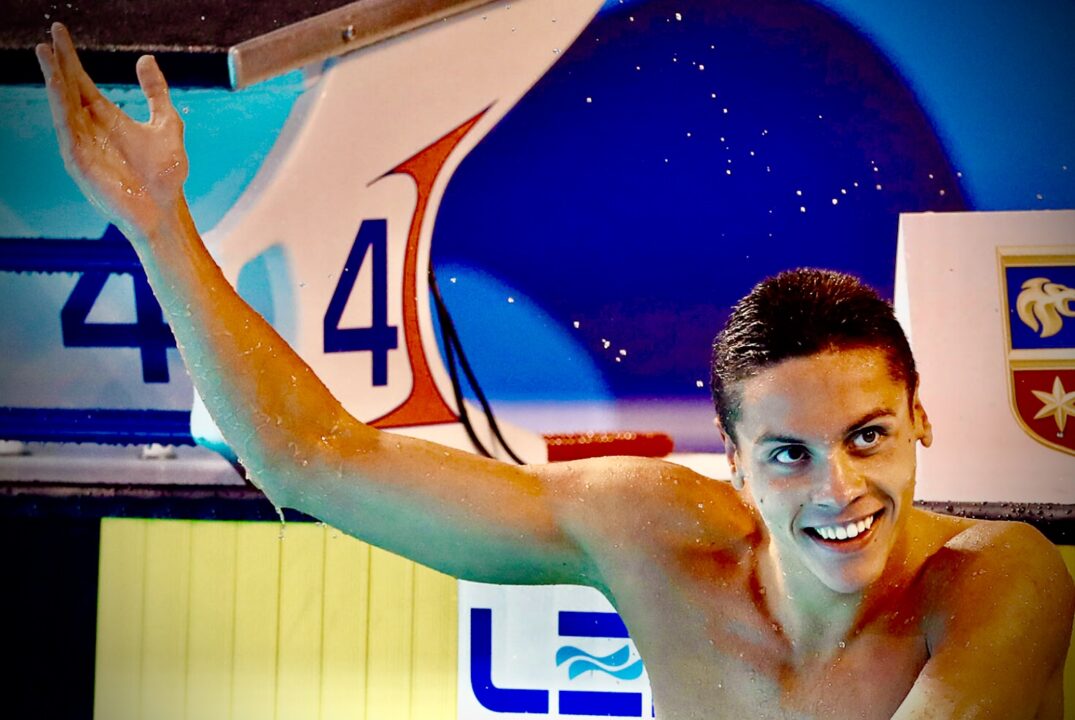 Romanian sensation David Popovici now owns nine of the 15 fastest back-half splits in the history of the men’s 100-meter freestyle.

David Popovici is the greatest swimmer in the world in the men’s 100 freestyle. He is not only the world record holder (46.86 during the 2022 European Championships), but he has also been below 48 seconds with an amazing regularity. At the 2022 World Junior Championships last week, the 17-year-old Romanian produced no less than five sub-48 swims.

Along the way, Popovici has developed a reputation for rocketing home on the back half of the race. He’s been producing so many 24-low second-half splits this year that he owns nine of the 15 fastest back-half splits of all time in the event, as shown by Swimming Stats’ Instagram.

It seems like soon he will be able to crack the 24-second in the second half of the men’s 100 freestyle. Some time ago, it was very rare for a swimmer close the race below 25 seconds. Do you know who was the first swimmer to do that?

It was only in 1999 that another swimmer would produce a back 50 in the 24-second territory, when Pieter van den Hoogenband won the race at the European Championships in 48.34 (24.87).

In 2001, during the semifinals at the World Championships in Fukuoka, Ian Thorpe set a sub-25-second back-half for the first time — a feat that he would repeat at the 2002 Commonwealth Games, the 2003 World Championships, and the 2004 Olympic Games.

In the subsequent years, a few swimmers joined Popov, Hoogenband, Thorpe and Phelps, like Jason Lezak and Filippo Magnini. But, for many years, there were very few swimmers who could make it.

For example, in the men’s 100 freestyle Olympic final in 2016, only three swimmers managed to cover the second part of the race below 25 seconds.

Thirty years has passed since Popov and his historic race in 1992. It’s possible we won’t have to wait too much longer to see a sub-24-second back 50.

But no one has come closer than Popovici. And not just once.

Taking into account that he is only 17, we can expect that he will improve his skills in the next years. How far can he go?

Phelps was back in 24.5 in Rio i a phelps suit. Was he ever faster?

Phelps is so goated. 10 years ahead of his time in an event he didnt really train for.

Back half of a 100 is definitely something he trained for and it was also suit assisted.

Crazy that Phelps is on that list. His first 50 meters were barely world-class, but he could bring a 100 free home as fast as anyone, despite being better at half a dozen other events.

It was however, courtesy of a shiny suit. Regardless of how much of his body it covered.

Suit wasn’t that shiny, and he’s the only one wearing a body suit on that list

He’s been back in 24-mid in textile as well.

Popov was absolutely incredible for his time. There’s no doubt in my mind he could have been sub 47 today with modern suits, underwaters, and I don’t know, maybe a cap? Back 24.90 in a brief in the 90s 🥵

All things considered he might have been under 40s…lmao.
Look, popov is still the greatest swimmer by his amazing resume, but you have to accept that times have changed, and there are better athletes than him nowadays. Records are meant to be broken. Give credit to the young guys that are swimming out of this world nowadays. Instead of taking credit from others to give to popov, you should go to YouTube and watch popov interview with Brett Hawke. Even Popov can’t understand the amazing speed nowadays.

My man went 21.64 in 2000, would have contended for a medal at worlds this year and in a new suit and cap probably win one. He was transcendent.

I don’t believe we’ve seen a talent greater than Mary T in the 200 butterfly since her time.

Thorpe was better at age 17 than any true middle distance swimmer we see today.

There are transcendent athletes and Popov was certainly one of them, he would be competitive today.

He wouldn’t wear a cap, he hates the feeling of rubber.

If you’ve seen what I’ve said on here, I’ve given more than credit to Popovici. I said a year ago that he had potential to go 45 by the end of his career. I don’t know if you know the difference between swimming in a tech suit and a brief. It saves a substantial amount of time, Katie ledecky dropped like 2 seconds in a 200 from prelims to final when she put on a suit. https://swimswam.com/katie-ledecky-explains-wearing-a-practice-suit-in-prelims-video/

Dressel has also gone like over second faster in a 100 with a tech suit than without.

So basically, Popov was swimming in underwear, no cap, and did underwaters that would make today’s swimmers blush. You can’t compare… Read more »

How are they taking credit away from modern swimmers

Hopefully he will come to the US and get an education and great training. Swimming lasts only so long. Perhaps he can enroll at UF in January?

He has been receiving a great education and training where he is!

Where exactly is he going to school? Now and for his undergraduate education? Thanks

David has mentioned in interviews that he attends a bilingual high school and plans to attend a Romanian university possibly studying psychology. He plans to remain with his coach.

He attends a bilingual highschool, where they study both in English and Romanian (hence his impressive English skills). It’s one of Bucharest’s top schools; it sounds elite and fancy, but it’s in fact a regular public school, you just need really good grades to get in there. So he is already getting an education and I’m sure everyone who has ever heard him speak will agree with that 🙂

He hasn’t really spoken about what he would study once he graduates from highschool (he has just started his senior year), but he did mention his original plan was indeed to study in the US. However, he decided against that, since that would have meant parting ways with his coach, with… Read more »

Perhaps Coach Nasty can hire his coach at UF – An amazing coach/swimmer combo to add to the Gator brand!

Who gives af about the Gator brand.

There was a comment somewhere here at the start of World Juniors that showed an entire spreadsheet done up by his coach with every minute detail of his training/routine.
Not to discount any legitimate effort/talent of US coaching, but based on the way he carries himself alone (far more mature than MANY educated people) plus his work in the pool, maaaaaybe the US isn’t the best option for him?

I do not think Popovici needs the US for his training. Maybe US needs him?

He has virtually unlimited resources in Romania for anything he wants. You cannot imagine the kind of power he has right now (everybody would do anything for him). He is only too kind to not abuse this power.

In terms of money, the sponsors will surely jump on him and besides the prizes that he gets for his medals from competitions/government/club, he also has a monthly pay of ~7k USD for swimming for his club (this was last fall, maybe it’s more now).

What I think is the most important thing that keeps him in Romania is his coach, Adrian Radulescu. I think he is the one that manages to keep him grounded. Every… Read more »

You can, in fact, get a good education outside of the United States.

They’ve been sold the lie that only certain universities can provide a great education and everything else is inferior.

It is certainly possible, however most American Universities smoke other colleges and universities in other countries. For evidence, look at the number of male and female swimmers who go to school here as opposed to the opposite! He could come here (with his Coach) for an amazing undergraduate experience. Then stay on and do a terminal degree program. With his English skills and an education, he could live in the USA and be happy. What does Romania have in comparison??

Well, the world’s most exciting swimmer, not to mention an exceptionally intelligent and well spoken young man, comes from Romania, raised by Romanian parents, trained by Romanian coaches, educated in Romanian schools. Romania must have something in comparison 🙂

10
-1
Reply
There's no doubt that he's tightening up

It would make sense to also consider relay splits, since the flying start doesn’t affect the back 50 really.

Lezak a comparatively pedestrian 24.56 in that swim, it was also more a function of Bernard, for whom there was no doubt that he was tightening up.

Duncs benefited from Adrian swimming up next to his laneline (more afraid of Morozov drafting, I guess?) the same way that Lezak benefited from the Nard Dog.

21.5. lezak’s split was a result of having a godly first 50 and a good, but not otherworldly backend, while bernard went out only a couple tenths faster (faster than the 50 wr at that point) and died in 25.4 coming back

Bernard was out in a 21.2 IIRC, which is just obscenely, mind bogglingly fast. He still went 46.6, which is ridiculously fast, but his last 15m just looked terrible compared to Lezak

The guy is unbelievable. Popovici will produce a 23.9 for sure in the coming years.

Also, I think is a bit unfair to list Minakov as the second best. Although he made a good time 48,45, he is a 47 guy. I wanna ask you guys if for exemple Dressel, or Fratus or Manadou decide to swim one day the 100Fr and in the first 50 they take it slow like in 50 seconds, and then explode for the second 50 to dip under 24, are you going to consider them the fastest coming home? Seems unfair. You should list just the fastest ever back half split for a 47s or less race. Minakov is the only 48 on the… Read more »

yeah I remember chalmers going 1:49.90 at sa states last year with a last 50 of 25.25. fastest last 50 ever and 0.45 faster than biedermann, but ultimately meaningless because the overall time is not that good