Fraser-Holmes Excluded From ISL Due To Missing Whereabouts Suspension 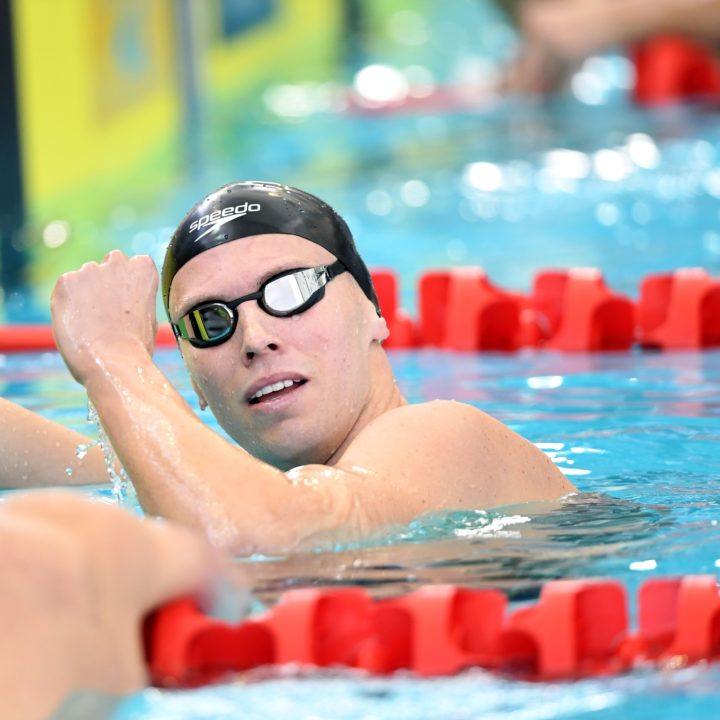 27-year-old Thomas Fraser-Holmes of Australia has learned he will be excluded from the new International Swim League (ISL) due to its zero tolerance on doping. Archive photo via Swimming Australia/Delly Carr

Earlier this year, Australian Olympic finalist Thomas Fraser-Holmes completed his 12-month ban for having missed 3 random drug tests over a 12-month period. Officially cut-off from the Dolphins national team both financially and training-wise, Fraser-Holmes began training again alone in December 2017 after having taken 6 months off. TFH paved his way back to competitive swimming by sealing up 400m IM silver at the 2018 Short Course World Championships in Hangzhou.

Now fully back in the swing of things and looking ahead, the 27-year-old has learned he will be excluded from the new International Swim League (ISL) due to its zero tolerance on doping, even with TFH’s unique circumstance of not actually having tested positive for a banned substance.

Per The Australian, TFH said “They [ISL]came back and said to me that because the sport of swimming needs to be protected from doping, they had to take a stand.”

He further stated,“It is what it is. I get what ISL is about, but surely there has to be a distinction in a doping offence between a whereabouts violation and a positive test. They are not in the same basket. Each case on its merits. There have been those who have offended on multiple occasions and people like me who have had a mishap.”

His situation does open questions regarding where represents true ‘zero’ in ‘zero tolerance’ when it comes to doping. Take the Madisyn Cox case, for example. The American tested positively for Trimetazidine, but a WADA-accredited lab was able to determine that the banned substance was present in both opened and sealed bottles of the multivitamin Cox had been taken for years and had listed on every doping control form she ever completed. Hence, the swimmer was essentially vindicated.

Back to TFH, the IMer stated that, in terms of the increasing hostility between the ISL and FINA, and the fact words such as ‘ban’ and ‘suspension’ were thrown about if swimmers were to compete at ISL events,“I’m just a big believer that the Olympics is the pinnacle of the sport and if they are threatening bans that would cost a swimmer the Olympics, I don’t think that’s worth it.

“I don’t think it (the ISL) is sustainable if that’s what it comes to. To me the most important thing is going to the Olympics and winning gold for my country. That is the ultimate. That is why I swam 12 months on my own. That is why I’m here today because I want to be able to swim for my country next year in Tokyo and try to win medals. This is where it becomes unsettling because if we don’t have our best people in Tokyo, how is that going to benefit Australia? That’s all I’m concerned with.”

He knew the rules and he broke them. It is right to exclude him if we are going for a 0 tolerence policy.

Food supplements, vitamins, somehow that is the excuse we have heard from swimmers accused of doping. Unlike American football, where unions and owners have conspired to make drug tests very difficult, tennis has been strict even though players are unionized.

It seems to me that swimming has little choice but to follow the example of tennis if it wants to attract more spectators and viewers.

How long did Marin Cilic get for his failed drug test?

A mishap? Singular? Dudeman missed three tests in a year, not one. I’m sure misses happen, which is why they allow three. If you’re a professional and you’ve somehow missed two, you do whatever it takes to make sure you don’t miss another. Period.

It sucks he can’t compete (and Madison Cox and Ryan Lochte who are also presumably clean) but I respect the ISL for drawing a hard line.

Just read the article on ZwemZa. Like all media report, it is hard to tell the conversation sequence and put his comment in the proper context of the conversation (rather than what is reported in bits and pieces) But I can’t help with these thoughts:
1. TFH can be Fina’s poster boy for their “fight” against ISL with his reasoning captured in the interview
2. Fina is the organization which said it could ban swimmers from Olympics /other Fina sanctioned events like World Championships. ISL did not ask swimmers to pick ISL over Olympics, nor have the authority to ban swimmers from Olympics.
3. ISL at best is an organization creating a professional swim event that somehow… Read more »

Interesting if they ban Ryan Lochte as well?

Reiterating my previous comments that nobody has publicized a fully-vetted rule yet, it seems likely that he would be excluded as well, if the ISL management gets their way.

Yeah I think any doping violation will cause a swimmer to be excluded. Everyone wants to know if they will make an exception for a “minor” violation. What about a THC positive? there is a whole pandora’s box that could be opened.

He missed three tests, not just one. This is similar to taking a masking agent drug, IMO. ISL is correct on this one. Regarding Cox, I think that she should also be banned from ISL because she did test positive, even if unknowingly.

Three cheers for ISL! No excuses for dopers or those who play loose with clean sport.