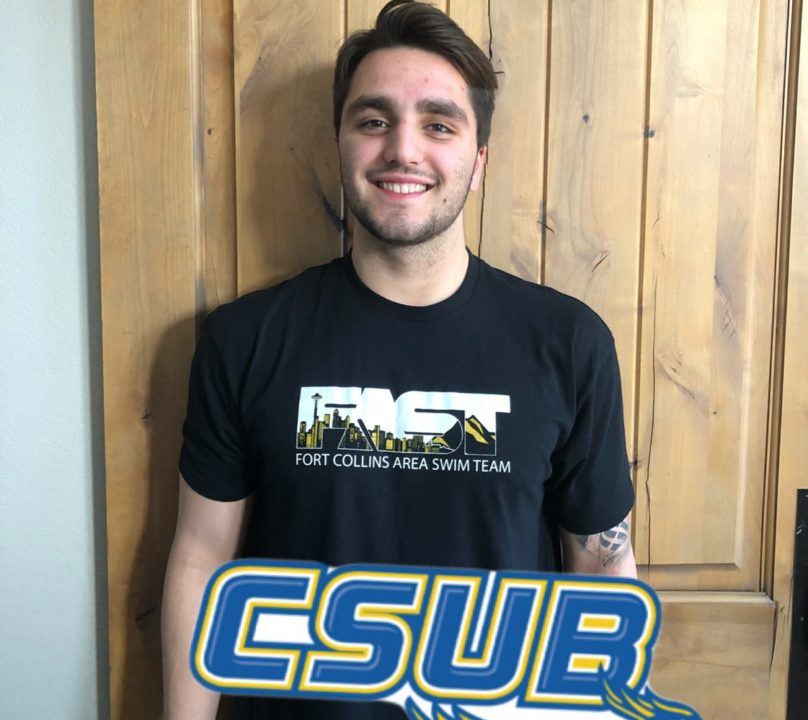 After the announcement that Eastern Michigan planned to cut its hugely successful swimming and diving program, an entire class of verbal commits was left in the lurch. Fort Collins, Colorado’s Sam Ybarra found a new home, happily announcing his verbal commitment to California State University, Bakersfield.

“I just committed to Cal State Bakersfield!!! I had previously been a commit of Eastern Michigan, but their program was cut, but I found a new home at CSUB!! Go Runners! Also Caeleb Dressel is the GOAT. 17.63 is nuts.”

Meanwhile, Ybarra, a senior at Fossil Ridge High School, has established himself as a strong flyer/IMer and recently placed fourth in the 200 IM (1:52.50) and fifth in the 100 fly (50.51) at the Colorado Boys 5A State Championships. Ybarra was part of the winning 200 medley and 400 free relays, helping Fossil Ridge win its third straight 5A state title.

Ybarra swims year-round for Fort Collins Area Swim Team. He has had a successful SCY season so far; he competed in the 100/200 fly and 200 IM at Winter Juniors and earned a PB in the 100 fly. At the recent Federal Way Sectionals, he improved his PBs in the 100 back and 200 fly.

Ybarra is a nice pickup for the Roadrunners. His top times would have scored in the B finals of the 100/200 fly and 400 IM at WAC Championships, and in the C final of the 200 IM.

That’s a good pickup for the runners!

In another life my friend, fly high bud?

In another life my friend, fly high bud?

Good for him! Glad he was able to land somewhere else quickly.

Totally agree. Glad he wasn’t left holding the bag. Good for him!!

God i hate the EMU administration

So if these EMU commits already made their 5 official visits before commiting, are they forced to look at other schools unofficially?