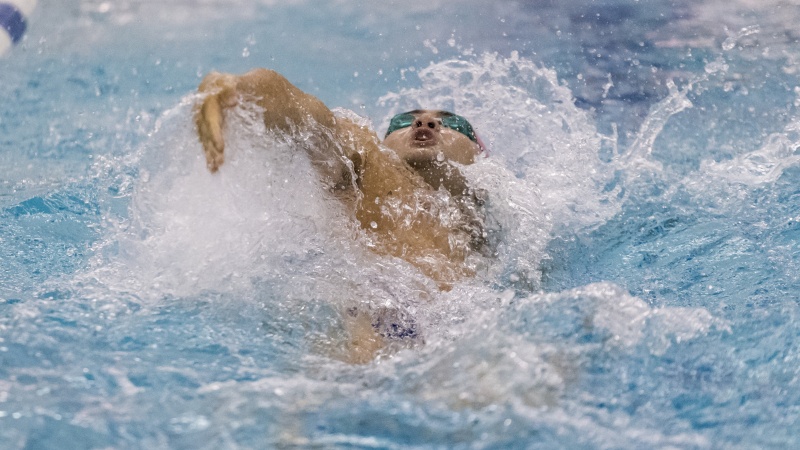 Former Duke University Swimmer and All-American Max St. George has been named the recipient of a Fulbright Scholarship to teach English in Malaysia. Archive photo via Duke Athletics

Former Duke University swimmer Max St. George has been named a recipient of a Fulbright English Teaching Assistant Award. With the award, he will work as an English teacher in Malaysia as a part of the English Teaching Assistant Program for 10 months beginning in January 2021. While there, he will teach English to students from kindergarten to university age, helping them learn about the American culture in the process.

“It’s a great honor,” St. George said. “I am really geared toward helping the whole world out, rather than bringing myself up or just my country.”

As a member of Duke’s swim team, St. George was a two-time All-America selection and the school record holder in the 100 backstroke and 200 backstroke in addition to four Duke record relays – the 200 freestyle, 400 freestyle, 200 medley and 400 medley. He also holds spots on the list of 10 times in school history in the 50 freestyle and 200 individual medley. He graduated from Duke in 2019 and has since been working as an assistant coach at Wheaton College.

During his time at Duke, he was also a participant in the Rubenstein-Bing Student-Athlete Civic Engagement Program (ACE), which brought him to China to work on a sustainable development project.

The Fulbright Program was created by the US Congress after WW2 and provides approximately 2,000 scholarships annually for American students to do research, study, or teach at locations around the world. With its original funding, Congress has the main goal to “fund the promotion of international good will through the exchange of students in the fields of education, culture, and science.”

As a part of the program, students can apply to work at one of over 140 locations worldwide. The English Teaching Assistant Program allows students to teach English to children around the world, becoming cultural ambassadors to the United States. In each location, ETAs work with children of various ages and different academic experiences, ranging from kindergarten to university level students.

DURHAM, N.C. – Former Duke swimmer Max St. George received a scholarship from the Fulbright U.S. Student Program and will be using the scholarship to take the opportunity to teach English in Malaysia as part of the English Teaching Assistant Program.

“It’s a great honor,” St. George said. “I am really geared toward helping the whole world out, rather than brining myself up or just my country.”

The Fulbright Student Program gives grants to allow recent college graduates to individually design study/research projects or participate in the English Teaching Assistant Program in participating countries. While in the program, participants will work and live with people from the host country. The program aims to facilitate cultural exchange in all aspects of life for the grantee.

St. George will spend his time with the program in Malaysia, teaching English for 10 months beginning in January. He was scheduled to go to Sierra Leon with the Peace Corps in June but is doubtful that will still happen with the current pandemic. St. George is hopeful that he may get the opportunity to go to Malaysia before January.

St. George left Durham as a two-time All-America selection and the record holder in the 100 backstroke and 200 backstroke in addition to four Duke record relays – the 200 freestyle, 400 freestyle, 200 medley and 400 medley. He also appears on the top-10 lists for the 50 freestyle and 200 individual medley.

According to St. George, one of his most influential experiences while at Duke was not in the pool. The summer after his sophomore year, he traveled to China as part of the Rubenstein-Bing Student-Athlete Civic Engagement Program, a collaborative service initiative between Duke and Stanford. During his time with the ACE Program, St. George contributed to the sustainable development of underserved communities in China through sports and environmental science education.

“One of the biggest impacts on me wanting to do philanthropic work was the ACE Program,” St. George continued. “My senior year I started talking to Emily Durham, the director of the ACE Program, and she encouraged me to look into programs like this. I looked into what they are, and I agreed with them more and more. I also think some of the classes encouraged me to have a more global approach to a career path.”

After graduating from Duke in 2019, he worked at a non-profit organization that helps schools in under-resourced communities receive needed materials. In addition, St. George stayed in the swimming community, serving as an assistant coach at Wheaton College. He has thoroughly enjoyed coaching and appreciates the opportunity to give back some of the leadership and knowledge that the Duke coaching staff instilled in him.

Congrats! FYI the name of the award is Fulbright not Fullbright!