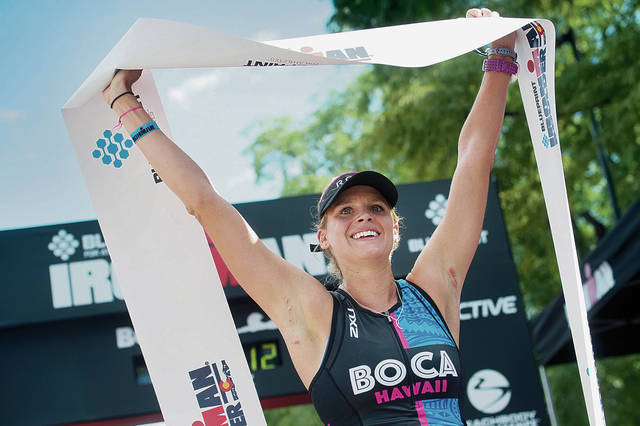 Former Bucknell University swimmer Lectie Altman remains in critical condition after she was stuck by a car on Thursday, January 25, 2018. Current photo via Star Advertiser

Former Bucknell University swimmer Lectie Altman remains in critical condition after she was stuck by a car on Thursday, January 25, 2018. Altman, now a veteran triathlete, was out for a routine bike ride with a group of cyclists when she was hit head-on and nearly killed by a car allegedly “drift racing” on one of Oahu, Hawaii’s most dangerous roads.

The car, a Nissan sedan operated by a 20-year-old man, was allegedly racing with another automobile when he lost control and veered onto Altman’s side of the road, crashing into her. Police have arrested the driver on suspicion of first-degree negligent injury.

Altman suffered leg and arm injuries and was immediately taken to the hospital. By Friday morning, she remained in critical, but stable condition after undergoing surgery to treat fractures from the crash.

“I never thought anything like this would happen,” Altman’s father, Jack, said. “She’s been doing it for years, nine years, and nothing like this has ever happened.” He was in shock when alerted about the accident.

“It’s ridiculous. It [Tantalus Drive] shouldn’t be a racetrack.”

Altman, now a triathlete, began swimming when she was 6 months old and continued competitively through college, where she swam at Division I school Bucknell University as a part of their graduating class of 2006.

She led the team to Patriot League championships during her time there. Throughout those four seasons, she won at least one Patriot League title each year. Mainly a 100 and 200 backstroker, she was victorious in the 200-yard freestyle her freshman year.

As a senior, Altman went undefeated in the 200-yard back and received the Patriot League’s High Point Award as the top career scorer of her class. She graduated with school records in three individual events and two relays and won the Christy Mathewson Award as the top athlete in her class. She was inducted into the Bucknell University Athletics Hall of Fame class of 2017.

I’m sorry, but this kind of stuff needs stiffer punishment. A car is a weapon and should be treated as such. Far too often careless drivers kill people and get off easy. I know she is in stable condition, but this guy could have easily killed a mob of cyclists (like in Kalamazoo, MI).

And please, do not put blame on cyclists. They have the right to the road

The sooner you accept THE LAWS, the sooner this stuff will stop happening.

As a high school swimmer, I would think that you would understand the benefits of exercising – having right to the road is a benefit that cyclist can and should enjoy.

Many states and counties have laws in place that allow cyclist to use the road (or ride two abreast), or even go past the bike lane if they deem conditions to be unsafe.

Your comment and mindset on this matter is precisely why cyclists continue to get injured and killed by cars. No need for your salty comment…go troll somewhere else

After reading your comment, it’s apparent that you have no business with a driver’s license (not that revoking it would keep someone like you off of the road; you no doubt would drive anyway)!

Bikes have a right to the road, as do cars. Stop being ignorant. This is not a place to argue whether she should be on the road. You all need to have some sympathy. Get well soon Lectie!

Agreed, and sorry bringing it up. it just angers me beyond belief seeing reckless drivers mowing down cyclists. Cyclists exercising and doing something they love.

This is terrible!!!! I hope she heals real quickly!

A highway shouldn’t be a racetrack!

More from Maryellen Newton
See All