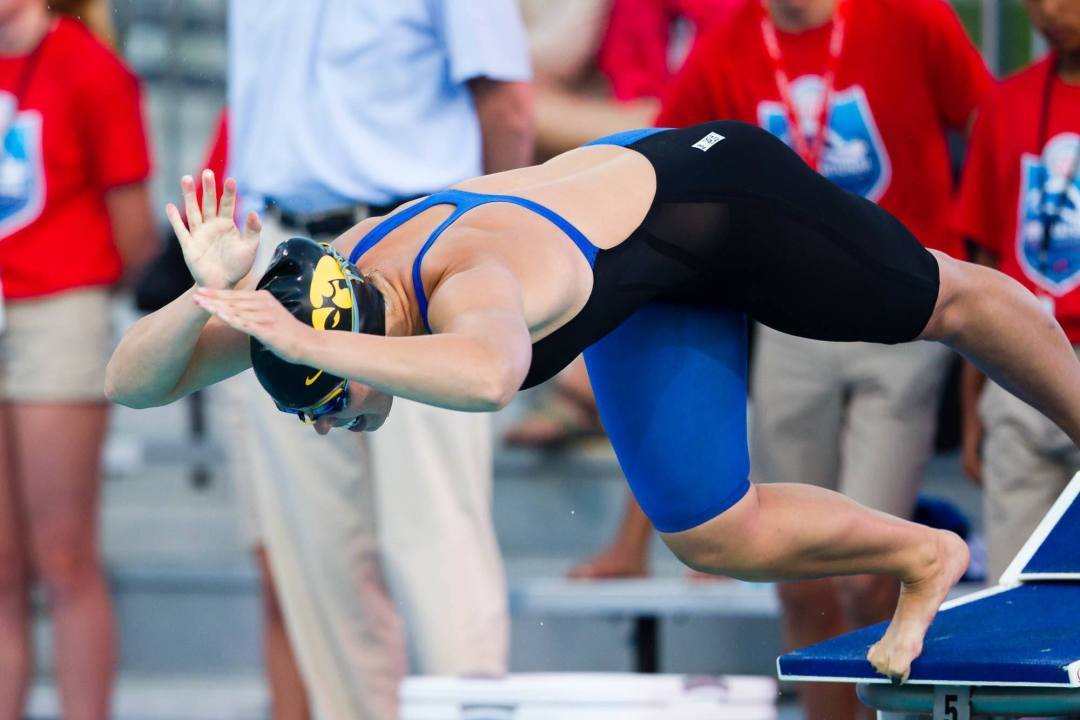 The Iowa Hawkeyes topped the Illinois Fighting Illinois in Champaign on Saturday, thanks in part to Emma Sougstad's two victories. Archive photo via Tim Binning/TheSwimPictures.com

Two relay wins were not enough to power the Illinois Fighting Illini over the Iowa Hawkeyes as the Hawkeye trio of Becky Stoughton and Emma Sougstad and Taylor Flummerfelt combined for seven individual event wins.

The Illini topped the Hawkeyes in the medley relay, in part because of a strong butterfly leg from Lori Lynn. Lynn’s 24.66 proved to be the difference maker. Iowa’s Carly O’Brien split a 25.80, but the Illini were out split on every other leg of the relay. Illinois won with a  1:44.59, Iowa touched the wall in 1:44.62.

Emma Sougstad, who broke two school records against Iowa State, picked up where she left off as well. She won the 100 breaststroke in 1:04.47, well off her record of 1:00.14, but still good for a victory of more than a second over Illinois’ Sam Stratford who finished second in 1:05.67.

Iowa swept the 200 breaststroke in Sougstad’s other individual event win. Sougstad touched in 2:19.36, followed by Colleen Champa and Shea Hoyt, who finished in 2:23.93 and 2:24.81, respectively, a big points boost for Iowa late in the meet.

Taylor Flummerfelt won both the sprint events for the Hawkeyes. In the 50 she touched first in 24.52. In the 100, she beat teammate Olivia Kabacinski to the wall by a hundredth of a second, 52.70 to Kabacinski’s 52.71.