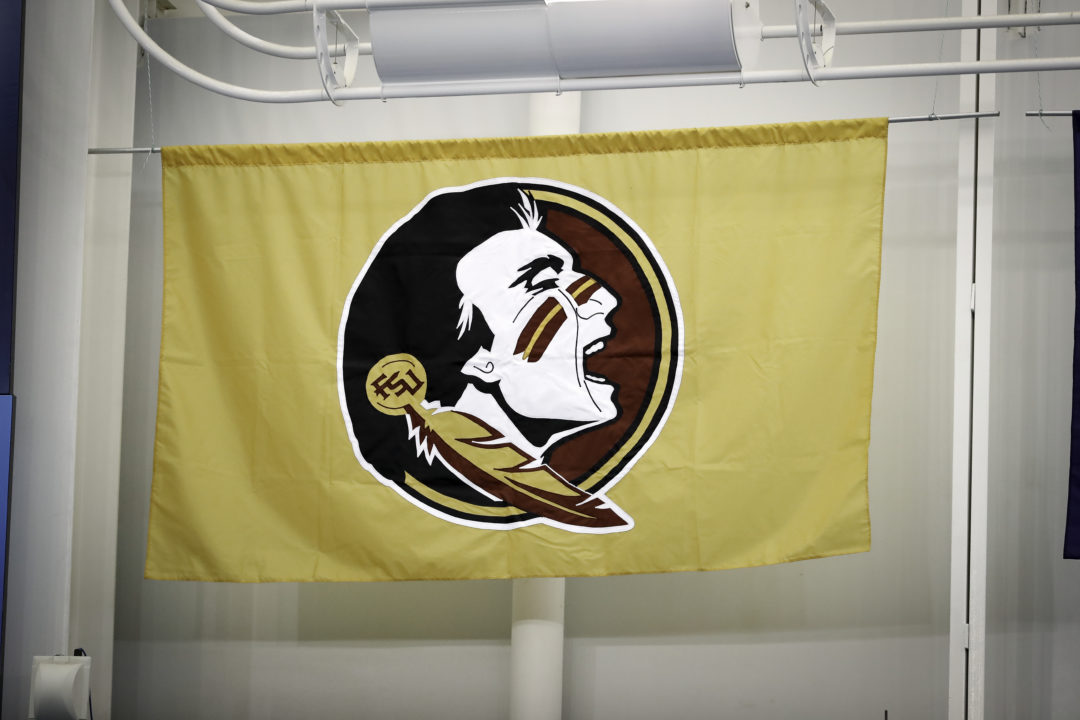 FSU has added two assistant coaches to the mix after Dan Carrington was hired at Penn State in July. Stock photo via Jeremy Esbrandt/FSU Sports Information

The Florida State Seminoles announced two additions to their swimming & diving coach staff for the 2022-23 season on Tuesday, bringing on Ben Zajic and Steve Barnes who will both serve as assistant coaches.

Zajic joins the Seminoles after spending the last two seasons coaching at nearby FAU, while Barnes comes to Tallahassee after most recently working in the athletics administration at Ithaca College.

“I’m really excited to welcome these two coaches to Tallahassee,” FSU head coach Neal Studd said. “They’re a great fit for our program. Steve has incredible experience and brings a wealth of knowledge and Ben was doing great things at FAU. We’re very excited to get this season started.”

This is FSU’s third addition to their coaching staff this offseason, having brought on Athena Miller as an associate head coach back in June.

Miller’s position opened up after the departure of former assistant Emma Svensson, while more openings became available when assistant Dan Carrington was hired as an associate head coach at Penn State in July.

Along with Studd and Miller, Zajic and Barnes join fellow assistant Steve Wood, who was hired prior to last season, and diving coach John Proctor on the Seminoles’ staff.

During his time at FAU, Zajic helped lead the men’s team to a runner-up finish at the CCSA Championships, with two of his swimmers earning Swimmer of the Meet and Freshman of the Meet honors.

Prior to joining the Owls in October 2020, Zajic was an assistant coach at the University of Nevada – Reno for one season, helping the Wolfpack to a second-place finish at the 2020 Mountain West Championships.

Zajic has also worked as the lead national and administrative coach for the Kansas City Blazers club program, and he’s also previously coached at Nation’s Capital Swim Club and as a volunteer assistant with George Mason University.

“I’m incredibly grateful and excited to be joining FSU and the staff Coach Studd has put together,” Zajic said. “I can’t wait to get the season started. Go Noles!”

Prior to coaching, Zajic was a four-year member of the Lafayette College swim & dive team, earning a Bachelor of Science in biology and psychology before earning a Master of Science in kinesiology from East Carolina University in 2017.

Barnes joins Florida State with a wealth of experience, having coached nine seasons at Penn State prior to taking on an administrative role at Ithaca, his alma mater.

Barnes was an assistant coach with the Nittany Lions for six seasons before spending three in an associate head coaching role.

During his time at Penn State, Barnes helped propel both the men’s and women’s programs to five top-30 finishes at the NCAA Championships, and he also helped guide Irish Olympian Shane Ryan to a pair of top-three NCAA finishes in the men’s 100 backstroke.

Prior to Penn State, Barnes spent four seasons as the head coach at Wabash College, leading the team to three top-four finishes at the North Coast Athletic Conference Men’s Championships.

He also spent three successful seasons as an assistant at Kalamazoo College, including a stint as interim head coach.

“I am both grateful and excited to join the Seminoles,” Barnes said. “I would like to thank FSU Vice President and Director of Athletics Michael Alford, Deputy Athletics Director for Administration Cindy Hartmann, and Coach Studd for the opportunity to join the Florida State family.

“FSU has a strong history in the pool, and I look to continue to build on the program’s success at the NCAA and ACC level while also making a positive impact on the student-athlete experience.”

Barnes obtained a Master of Science in exercise science from Ithaca in 2006 while serving as an assistant coach for the program.

The FSU men placed sixth and the women eighth at the 2022 ACC Championships, both one spot lower than they were in 2020-21.

is it normal this late add new coaches or leave team to another, school has started?

No, not unless someone leaves late.

This has been an unusually-busy offseason for coaching changes, though, and I think that’s why we’re seeing this process drag into September.

DId Barnes spend all of 2 weeks at Ithaca? Seems fishy….

Don’t assume you know what’s going on in peoples lives.

What happed to the hire of Zach Mertens? When will that be announced?