Florida Hits the Road for Matchup with Georgia 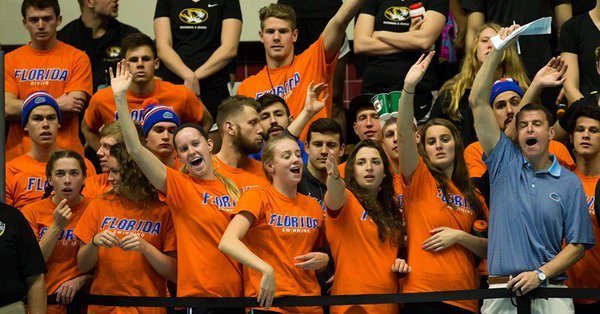 The University of Florida men’s and women’s swimming & diving teams take to the road for a battle with SEC foe, Georgia. Current photo via Florida Athletics

GAINESVILLE, Fla. – The nationally-ranked University of Florida men’s and women’s swimming & diving teams take to the road for a battle with nationally-ranked SEC foe, Georgia. The meet is scheduled for an 11 a.m. start time on Friday, Oct. 26, in Athens, Georgia.

The last time the women bested the Bulldogs was in the 2006-07 season at home. The Gators have not won at Georgia since the 1993-94 campaign.

On the men’s side, Florida has an 8-4-1 record against Georgia since the 2005-06 season. The Gators have won at home and on the road four times each with the lone tie coming at home, during that span.

The No. 10 ranked women hold four of the Top-20 times in the 400 IM in the NCAA this season, which is tied for the most with North Carolina State. The Gators hold three of the Top-10 times in the 400 IM. Kelly Fertel leads the group with the fifth-best time, followed closely by Vanessa Pearl in sixth. Mabel Zavaros holds the 10th-best time and Hannah Burns comes in at the 16th-best mark.

The freestyle distances have been strong for UF, as Taylor Ault and Leah Braswell find themselves inside the Top-20 in both the 500 and 1,000. Once again, Florida is tied for the most swimmers inside the Top-20. Ault holds the ninth-best swim in both the 500 Free and 1,000 Free, while Braswell ranks No. 12 and No. 11 in the 500 Free and 1,000 Free, respectively.