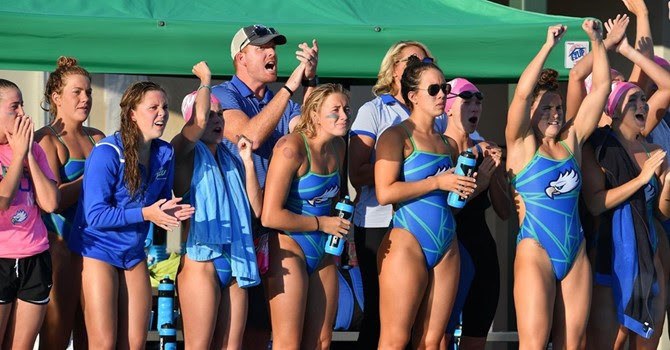 In a very closely contested meet, the Florida Gulf Coast women triumphed over Florida International 152-148 in a crazy comeback. Trailing by eight points through 12 events, the Eagles banged out three straight event wins (excluding diving) to claim the meet by a mere four points.

Christina Kaas Elmgreen and Yee Ching Wong put up a 1-2 finish in the 100 fly to pull within a point, but FIU regained a ten point advantage with a 1-2 finish in the 1-meter dive. Barbara Caraballo won the 200 IM by just 0.13 for Florida Gulf Coast, and that was followed by a win in the 400 free relay that saw them take the meet by four points.

Though losing, the Panthers had a strong showing especially early on. Kyna Pereira led a 1-2-3 finish in the 1000 free, and Megan Bowen (200 free) and Skye Carey (100 back) also had early wins that got FIU out ahead. A couple of close finishes late ultimately cost them the meet.

With a first- and second-place finish from Christina Kaas Elmgreen (Charlottenlund, Denmark/Ordrup Gymnasium) and Yee Ching Wong (Hong Kong, China/Diocesan Girls’ School) in the 100 fly, the Eagles cut the deficit to a point. However, a strong performance from FIU in the one-meter dive gave the Panthers a 10-point lead with the 200 IM and 400 free relay remaining.

With their backs against the wall, the Eagles found a way to win those final two events and leave Miami with a win. Barbara Caraballo (Ponce, Puerto Rico/Indian River State/Newsome HS) out-touched FIU’s Megan Bowen by 0.13 seconds in the 200 IM and cut FIU’s lead to five. Moments later, the quartet of Hannah Burdge (Stuart, Fla./Martin County HS), Gracie Redding (Orlando, Fla./FSU/The First Academy), Katie Latham (Deal, Kent, UK/Sir Roger Manwood’s School) and Fanny Teijonsalo (Espoo, Finland/Makelanrinteen Lukio) capped of the meet by touching the pads in 3:25.14 and claiming the ever-important 11 points that turned out to be the difference.

Along with their performance in the pool, FGCU also received a huge performance from Ashley Wright (Port St. Lucie, Fla./Indian River State/Lincoln Park Academy) off the boards. The senior diver won the three-meter event with a score of 286.73, which not only marks a new personal best and surpasses the NCAA Zone Diving Standard, but also registers as the fourth-best dive in program history.

With the win, FGCU matches the program record for wins in a single season for the second straight year. The Eagles have recorded 12 wins on a pair of other occasions as they went 12-1 a season ago and 12-3 in 2009-10. As far as records indicate, the four-point margin of victory in Saturday’s dual meet with the Panthers was the second closest in program history. The Eagles previously defeated Miami, 151-148, during the 2011-12 season.

“We knew coming into today that this would be a challenging meet,” said FGCU head coach Dave Rollins. “Coming off the high of Senior Day, traveling and racing a very tough team, it was going to be challenging from the start. These young women showed so much pride, grit and determination, and it was an incredible experience. Christina and Yee came up huge for us today. Their efforts continued to pumped up our team and were a huge reason why we came away with the win today. Finishing off with a total team win is a great way for us to move into CCSA’s in a couple of weeks.”

As has been the case throughout much of the season, FGCU’s 200 medley relay of Doris Eichhorn (Berlin, Germany/HTW Berlin), Evita Leter (Paramaribo, Suriname/Doral Academy), Teijonsalo and Latham got the Eagles off to a fast start with a win in the event after touching the pads in 1:43.64.

However, FIU responded to win the next three races and take a 14-point advantage. The Panthers swept the 1000 free to quickly claim the lead before extending the margin with a first- and third-place finish in the 200 free and win in the 100 back.

After Leter won the 100 breast in a time of 1:04.89, the Green and Blue received a huge performance in the 200 fly as a trio of Eagles finished in the top four. Kaas Elmgreen won her first event of the afternoon as she touched the pads in 2:01.48, while Ching Wong touched second in 2:04.22. The duo also finished first and second in the aforementioned 100 fly to start the Eagles’ comeback. Coming off a strong performance yesterday afternoon, freshman Cassidy Fry (Oakwood, Ohio/Oakwood HS) placed fourth in the event in 2:08.31.

FGCU again saw its slight lead squandered as FIU’s Naomi Ruele out-touched Latham by 0.10 seconds in the 50 free. However, after FGCU evened the score at 75-75 following the three-meter dive, Burdge and Latham finished first and third in the 100 free with times of 51.38 and 52.26, respectively, to reclaim the lead, while Caraballo, Sandra Wilk (Lexington, Ky./Paul Laurence Dunbar HS) and Eichhorn finished second, third and fourth in the 200 back to maintain the advantage.

The fifth lead change of the afternoon came when FIU placed two swimmers in the top three of the next two events – 200 breast and 500 free – and took the previously noted eight-point advantage. However, the Eagles were able to count on its 400 free relay when they needed them most to finished the meet and the regular season strong and put the cross-state rival Panthers away.

UP NEXT
FGCU prepares for the CCSA Championships held in Athens, Ga., from Wednesday, Feb. 15 through Saturday, Feb. 18, where the Eagles will be in search of its eighth conference crown in a span of nine years.

MIAMI (Jan. 28, 2017) – In a tightly-contested dual meet, the FIU women’s swimming and diving team (9-3) fell to the No. 34-ranked Florida Gulf Coast Eagles, 152-148, on Saturday afternoon from the Biscayne Bay Aquatic Center. The Panthers could not overcome a 15-point deficit heading into the meet’s final event, falling to the Eagles by four points.

Both squads exchanged the lead over the next two events. Naomi Ruele posted a 23.81 in the 50 Free to finish first. Letizia Bertelli also finished third in the 50 Free to give FIU a 67-64 lead after seven events. FGCU took a 77-73 lead following the 100 Free. Bowen led the Panthers with a time of 51.75 (second place).

Quesnel won the 1-meter program followed by Haskell (second) and Laura Coronado (fourth) but a third- and fifth-place finish by FGCU divers Ashely Wright and Miki Buening proved to be the difference as the Panthers fell, 152-148. Both Quesnel (292.95) and Haskell (284.63) registered NCAA Zone B qualifying marks in the 1-meter program.

The Panthers will close out the 2016-17 regular season with their final dual meet of the year. FIU will host Conference USA foe Florida Atlantic beginning with the diving portion of the meet on Thursday, Feb. 2, from Miami-Dade College (1 p.m.) and concluding with the swimming events on Saturday, Feb. 4, from the Biscayne Bay Aquatic Center (noon).