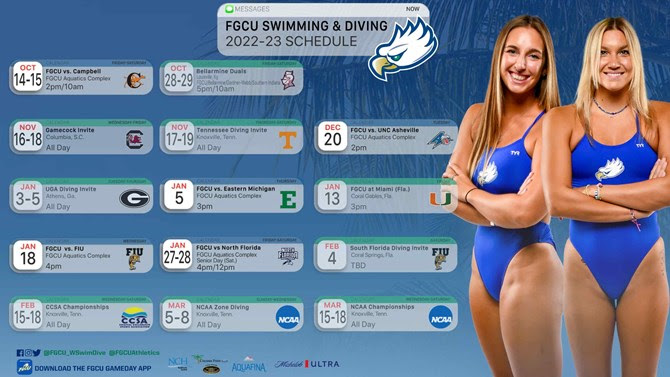 The Eagles are seeking their 11th CCSA Championship and will begin that quest on October 14-15 in Fort Myers when they welcome Campbell for a two-day meet. Current photo via FGCU Athletics

FORT MYERS, Fla. – FGCU swimming and diving head coach Dave Rollins has announced the full 2022-23 schedule. The Eagles are looking for their 11th CCSA Championship and will begin that quest on October 14-15 in Fort Myers when the Eagles welcome Campbell for a two-day meet to open the season.

“New season brings new opportunities!” said Rollins. “We are looking forward to welcoming some new faces to the Nest, while also having the opportunity to get on the road and compete. We have created some different opportunities this year for our program, and I am excited to see how we grow and develop leading into our championships.”

Following the season-opener against the Camels, FGCU will head to Louisville for the Bellarmine Duals in which the Eagles will take on the Knights as well as Gardner-Webb and Southern Indiana. It will be a special homecoming meet for a trio of Eagles as Claire McAtee, Emma Hixenbaugh, and Anna Hogan will all return to their hometown.

The Eagles will have a big week from November 16-19 as the swimmers will head off to Columbia, South Carolina for the Gamecock Invite while the divers head to Knoxville for the first of a potential three times this season for the Tennessee Diving Invite.

Over winter break, the Eagles will welcome two squads to Fort Myers beginning with UNC Asheville on December 20th. Eastern Michigan will come down a couple of weeks later on January 5th, making a return trip from a couple of years ago when the Eagles visited Ypsilanti. Also during winter break, the divers will head to Athens, Georgia for the UGA Diving Invite from January 3-5.

After the break, the Eagles head to Miami to take on the Hurricanes on January 13th before returning home on the 18th against FIU. The Green and Blue will remain home on January 27th and 28th for a meet against North Florida with that Saturday being Senior Day.

The regular season wraps up on February 4th as the Eagle divers will compete at the South Florida Diving Invite in Coral Springs.

The CCSA Championships will be held from February 15-18 in Knoxville at the Allan Jones Intercollegiate Aquatic Center on the campus of the University of Tennessee. Should any Eagles swim qualifying times throughout the season, they will advance to the NCAA Championships in Knoxville on March 15-18. The NCAA Zone Diving Regionals will also be held in Knoxville and will run from March 5-8 with the Eagles looking to make a splash as they return all three divers who qualified last season.

I plan to attend a meet!