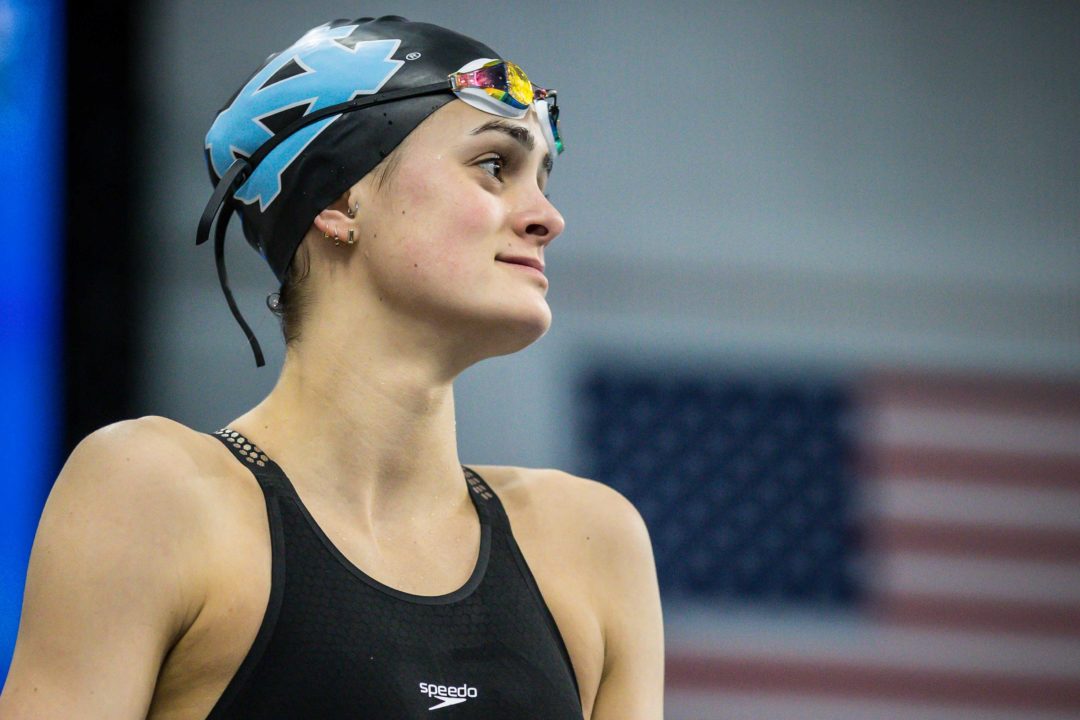 In a dual of UNC schools, it was the Tar Heels who came away with the win on both the women’s and men’s sides. In total, UNC won 29 of the 32 events to roll past the UNCW Seahawks.

Grace Countie, Ellie VanNote, and Emma Karam dominated the women’s meet, combining for five pool records. VanNote got things started in the 200 freestyle, popping 1:50.36 to take down the former record of 1:50.78 set by Lindsay Gendron (Tennessee) in 2013. VanNote earned her second pool record in the 100 fly, touching in 53.95 and bettering the 13-year-old record old by 1.14 seconds. Last season, VanNote finished 16th in the 100 fly at NCAAs in 52.06.

Countie coming back for a fifth-season was a massive boost for the Tar Heels, and she’s looked strong through the early part of the season. She’s been as fast as 50.77 in the 100 back and 21.44 in the 50 free. In the latter event, her time this weekend was about where she was at this time last season. It’s her 100 back that’s a big improvement from October 2021; last season, she didn’t break 53 seconds until her mid-season invite.

UNC’s other big fifth-year Sophie Lindner, raced a pair of off-events and took second in the 100 free (51.37) and third in the 100 fly (55.40). Last year, she scored nine points at NCAAs from two ‘B’ finals berths in the backstroke events.

In the diving well, Emily Grund made her return to competition for the Tar Heels. Grund announced she had been diagnosed with Acute Promyelocytic Leukemia (APL) in September 2021. She sat out from competition to undergo treatment, and was declared cancer free in March. A redshirt senior, Grund took second on 1-meter (306.83) and third on 3-meter (252.60)

Sophomores Dylan Citta and Nick Radkov each secured two event wins for UNC. Citta swept the breaststrokes in 55.98 and 2:03.64, while Radkov won the 100 and 200 freestyles in 45.25 and 1:38.53. For Radkov, an NCAA relay qualifier, those times are right around where he was at this time last season. For Citta, this 200 breaststroke is a huge improvement from where he was at in October 2021. On this weekend last year, he was 2:07.43.

Much of UNC’s momentum comes from their returning fifth-years, and on the men’s side, it’s diver Anton Down Jenkins who’s boosting the Tar Heels. Last year, the Olympian and two-time ACC Diver of the Year scored all of UNC’s 24 NCAA points as he finished 8th on 1-meter and 6th on 3-meter.

For the defending CAA champion UNCW men, Sam O’Brien took home two second-place finishes. He earned a runner-up finish behind Dramm in the 1000 with a 9:25.47, then took second in the 200 back to Noah Rutberg just .24 seconds behind in 1:48.53. Other positive results came from Jacob Duracinsky, who posted a season best 45.60 in the 100 free, moving him less than a second off the lifetime best he went leading off UNCW’s second-place 400 free relay at 2022 CAA championships.