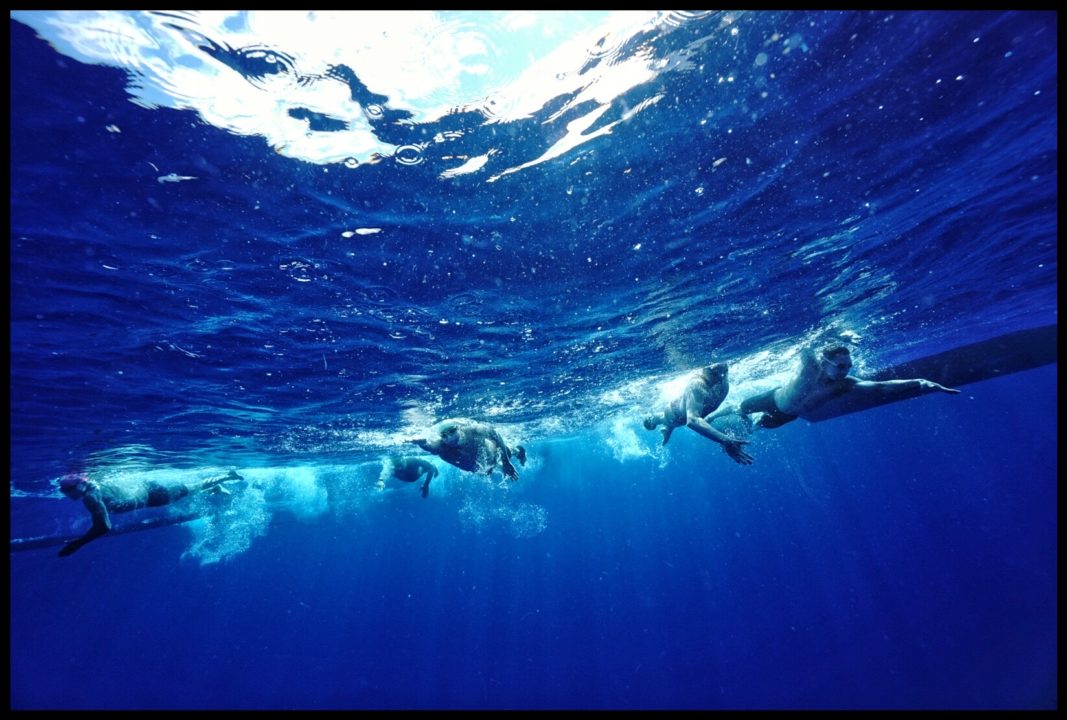 Five swimmers from Ala Moana Beach Swim Club have successfully completed a group swim across the 27.3km Kaulakahi Channel in Hawaii. Current photo via Colin Cross

On August 30, 3-time Olympian Elizabeth Beisel is going to attempt to become the first woman to complete the 20km swim between Pt. Judith and Block Island.

Boy and Reymond took the respective women’s and men’s 25k titles to close out the Open Water portion of the 2021 European Championships.

Five swimmers from Ala Moana Beach Swim Club have successfully completed a swim across the Kaulakahi Channel from the Hawaiian islands of Kauai to Niihau.

The team, composed of Bill Goding, Lectie Altman, Marcus Guttmann, Ryan Leong, and Stefan Reinke finished the 27.3 km swim in 11 hours, 38 minutes despite strong currents and 3-4 foot waves. The group did the swim together, not as a relay.

The group also had several encounters with wildlife, including stinging no-see-ums for the first two hours, man of war clusters, pods of dolphins, a school of 40 tuna boiling on the surface, multiple schools of opelu, dive bombing booby birds, and an 8’, fully mature, Silky shark.

According to Reninke, the president of the Waikiki Roughwater Swim Committee, the shark, nicknamed Calvin, followed the group for approximately 8 hours of the crossing. “The last time I saw Calvin, Marcus and I were about 25 meters behind the group. Marcus tapped my leg, stopped and said, ‘I don’t know if you care, but Calvin is swimming next to us.’ I looked around and saw him peacefully swimming parallel to us about 5-10 feet below and said, ‘No.’ Calvin became part of the pod and, as unbelievable as it may sound, we were comfortable with him. It was truly a once in a lifetime experience.”

With the swim, the team joins a small group of swimmers who have crossed the channel, as it has only been done 17 times. 3 of those swims were done by Bill Goding, who completed this most recent swim at 67 years old.

Calvin the Silky Shark. Via Ryan Leong, used with permission

The swimmers enjoying a water break during the swim. Via Bonnie Leong, used with permission

Underwater shot of the swimmers. Via Colin Cross, used with permission

Lectie you are amazing and my inspiration. Coach Jerry

The title of this article is incorrect. They swam together but it was NOT a relay. Each person completed the full channel swim distance. What an amazing group of open water swimmers!

Thanks Karlyn. We had a blast!

What an amazing swim. Having done the ‘au ‘au channel (9 miles/5ish hours) a couple of times as a youngster, being in the salt water for that long is a extremely taxing feat, both physically and mentally. To imagine a journey lasting twice that long is hard to grasp; it’ll truly be something these folks remember forever. Bravo Zulu, and enjoy eating and drinking something other than Gatorade and cliff bars!

Yes, we all swam the channel solo (not a relay as stated above). Additionally, our team president’s last name is Reinke (not Reninke as spelled in the article). Thank you.