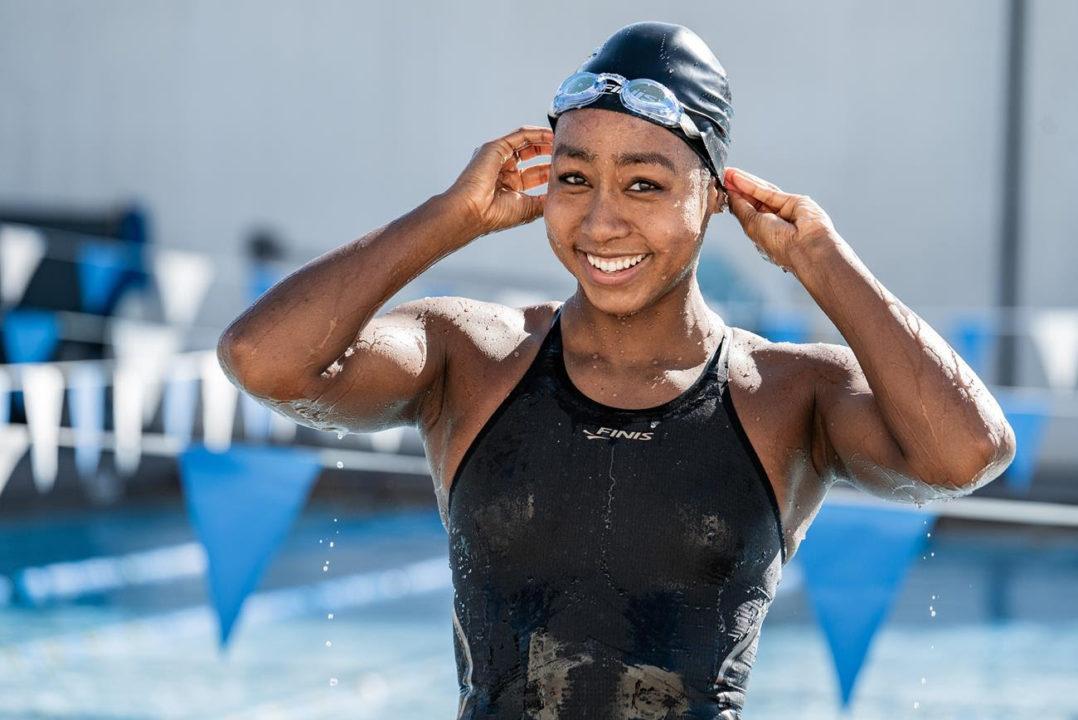 FINIS, Inc., the worldwide leader in technical swimming innovation, is proud to announce the signing of two-time Olympian Lia Neal to a long-term deal that extends through the 2020 Olympic Games. Current photo via FINIS

FINIS, Inc., the worldwide leader in technical swimming innovation, is proud to announce the signing of two-time Olympian Lia Neal. The New York native and Stanford alum signed a long-term deal with the leading swim brand that extends through the 2020 Olympic Games.

“I am extremely excited for the opportunity to join the FINIS family. The future’s looking bright for FINIS. I could not be happier to be part of this team on its upward trajectory through 2020 and beyond,” says Neal.

“We are very proud to support an athlete like Lia,” says CEO and cofounder John Mix. “She has the character, work ethic and potential that we look for in every member of Team FINIS. Lia puts her whole heart into this sport and that’s what we need in our athletes—they are our closest partners in developing the best products in the world.”

Neal started her impressive career at an early age. She has continually excelled, nationally and internationally, since competing in her first Olympic Trials at age 13.

Neal made history on the global stage in 2012, becoming the first woman of African American descent to become a two-time Olympian and swim in an Olympic final for Team USA. As a star sprinter at Stanford, Neal played a vital role in setting multiple American records and winning national titles, finishing her career as team captain of Stanford’s 2017 NCAA Championship team.

Most recently, Neal emerged from World Championships in Hangzhou, China, with four medals, including a gold medal in the 4×100 alongside a fellow member of Team FINIS, Olivia Smoliga.

“I admire everything Lia represents as an athlete,” says national sales manager Keith Jizmejian. “She’s not only committed to improving her own performance, but also improving access to the sport. Lia’s values stood out to us very early on in the process.”

Neal is a major proponent for improving education and access to swimming in the U.S. and internationally. In 2017 and 2018, Neal led swim clinics around the globe, including in the U.S., China, Hong Kong, Mexico and Singapore.  Further, she recently launched Swim Brooklyn, an initiative to raise awareness about swimming in her home community.

“We’re just getting started,” says Mix. “In launching the Rival 2.0, it was our explicit goal to make a suit that would impress the best athletes in the world. Lia joining the team is just one of the many indicators that the Rival 2.0 is that suit. Working with someone of Lia’s caliber is an exciting step for our team and we intend to maintain every bit of this momentum going into 2020.”

John Mix and Olympic Gold Medal swimmer Pablo Morales founded FINIS in Northern California in 1993 with a mission to simplify swimming for athletes, coaches, beginners and lifelong swimmers around the world. Today, FINIS fulfills that mission through innovation, high-quality products and a commitment to education. FINIS products are currently available in over 80 countries. With a focus on innovation and the fine details of swimming, FINIS will continue to develop products that help more people enjoy the water.

FINIS, Inc., is a SwimSwam partner.

What happened with her and TYR?

TYR has so many athletes now…Vollmer, Lochte, Grevers, Ledecky, Manuel, Dhalia….that probably had something to do with it

I don’t know what happened with her and TYR, but Finis is a great choice. They are really doing big things in the tech suit market. A lot of innovation coming out of Finis right now.