FINA Should Treat Hosszu As More Than Just Another Swimmer 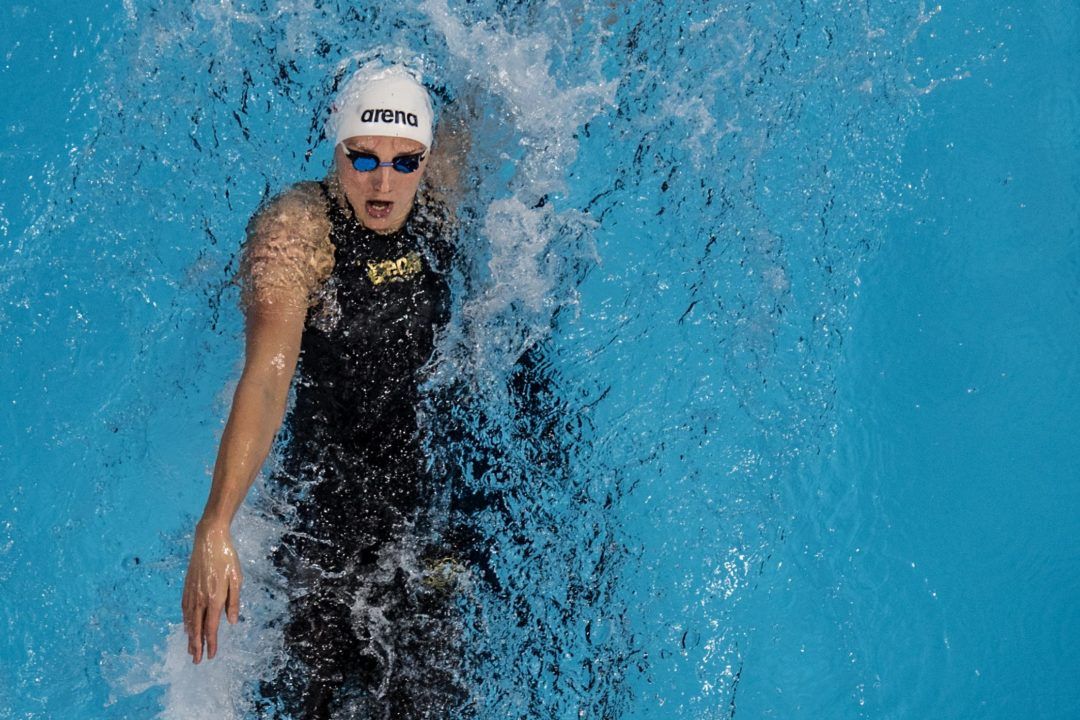 FINA announced recently that it would cap the number of events each swimmer could enter at a single World Cup stop at four. Current photo via Mike Lewis/Ola Vista Photography

FINA announced recently that it would cap the number of events each swimmer could enter at a single World Cup stop at four. What kind of impact would this have on the cup? How many swimmers would be hurt by this rule, and by how much? I took a look at the recent World Cups, whose results were posted on OmegaTiming.com to find out.

From 2012 to 2016, there were 40 such World Cup stops, with 2,687 swimmers making a final in 11,818 entries. The distribution of those entries skews strongly towards only making a small number of finals:

From here it might seem that cutting off the distribution at 4 wouldn’t have too big an effect. After all, five swims is already really rare. Six more so. But what I’m more interested in are the swimmers who would be affected by the rule change. How many times has each swimmer competed in more than four finals at a single stop? This is a pretty familiar list overall:

Of course Katinka Hosszu has done this far more than anyone else. The Iron Lady will have broken this rule more than the next three most prolific competitors combined. But even this doesn’t quite do justice to just how many events she has competed in. After all, swimming 5 events at a stop isn’t really equivalent to swimming 10, but here I am comparing them as if they are. The swimmer competing in 5 events only loses one swim, by the swimmer competing in 10 loses six. So let’s get to the real question: how many events over four has each swimmer competed in? How many swims would have been lost due to this rule.

It could be that FINA is simply focusing on the aggregate numbers and Hosszu becomes just one swimmer negatively impacted by the rule change. It could be that they simply don’t like Hosszu and the decision was a little targeted. Regardless, FINA appears to be greatly disregarding the value that the Iron Lady’s crazy event schedules have brought to the World Cup series. It’s not just that she’s been the most successful swimmer in the history of the World Cup, she has been, without a doubt, the most interesting swimmer in the World Cup over these last five years that’s being missed.

FINA should give up the World Cup and instead have designated (long course) premium status meets throughout the year like IAAF has. My suggestion for the “diamond league of swimming” would be a couple of the Arena Pro Swim meets, the Mare Nostrum Series, Sette Colli in Rome and then Stockholm, Moscow, Tokyo and Brisbane or so to cover the world to a satisfying level. In total about 10-12 meets per year, and flexible to a couple of changed locations. This way swimming could actually build a GP series worth noting, and perhaps some economy into the sport. The way it is now, GP swimming is in a standstill and not getting attractive anytime soon.

The people that it hurts the worst are the swimmers that make the world cup most interesting.

I don’t care that Katinka can’t make 300k. Looking at the number of events these top athletes do, there isn’t much competition for her. Personally I am not a fan of hers don’t find her likeable. Clearly the other elite swimmers don’t care for the platform as they don’t compete in many events either. I watch The Fina meets to see The athletes but it’s not exviti g as so few to watch. The USA Arena pro series gives larger prize money so no surprise they opt for a chance at that and a BMW lease!

Super_richie – the Arena Pro Swim Series does not give more prize money than the World Cup series. It’s actually not even close, even if you factor in the BMW lease.

This is like when the NBA told Kareem Abdul-Jabbar that he couldn’t dunk.

There should be NO limits on events entered in any competition. They talked about this BS when Spitz won 7 golds. The idea of a competition is to see how good you are and only losers whine about it being unfair for one person to win so many events.

Not sure about “any competition.” Many competitions cap the number of events due to time constraints. But, yes, if time isn’t really a factor let competitors enter as many events as they want.

Yeah, this rule change feels like it’s specifically targeting the few swimmers who do compete in so many events. Here’s the thing though – these swimmers have dedicated fan bases not just from their home country, but fans all over the world. I’m Canadian and I would love to see how many medals Katinka could win in the world cup.

In creating this rule, FINA’s likely angered Katinka, her sponsors, her passionate fans, and the same goes for any other swimmers that were hoping to compete in more than 4 events per stop.

Seems like a silly rule. Hosszu is often the best draw.

She should be treated as two swimmers: Katinka and Katinkb and maybe she can win 1st and 2nd!

That would be awesome. Even more, can you imagine if the Litherland triplets were the Hosszu triplets??? The rest of swimming might as well give up…