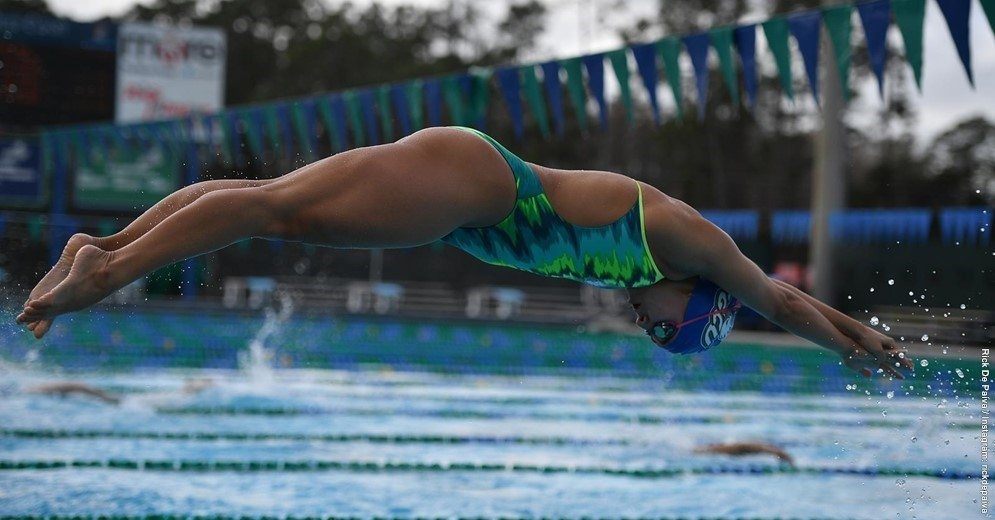 The #34 FGCU swimming and diving team returned to competition for the first time in a month and turned in an impressive victory against conference-opponent UNC Asheville by defeating the Bulldogs, 154-51, Sunday morning at the FGCU Aquatics Center.

With the win, FGCU heads into the new year with an 8-3 overall record and 2-0 mark against CCSA opponents. On the other hand, UNC Asheville falls to 3-7 on the year and is now 1-5 against conference foes. The two teams will meet again at the CCSA Championships in February.

Despite mixing up its typical meet schedule and lineup, the Eagles finished first in 10 of 11 events Sunday and had two swimmers touch in the top-three in all 11 races, including a sweep of the podium in the 200 medley relay, 200 IM, 500 free and 200 free relay.

“There was a little bit of rust, and some athletes performed a little better than others, but we got a chance to swim a lot of different events and that was good to see,” said FGCU head coach Dave Rollins. “We’re right in the middle of our winter training, so the girls are pretty tired and kind of beat down, but they had a lot of great energy on the pool deck and were supportive of each other, which we always like to see.”

While competing in relay events according to class Sunday, the Eagles’ sophomore quartet of Georgiana Gardner (York, Maine/York HS), Linda Shaw (Leeds, UK/Roundhay HS), Kiley Eble (Cleveland, Ohio/Gilmour Academy) and Hannah Burdge (Stuart, Fla./Martin County HS) out touched their fellow junior and senior relays with a time of 1:50.46. Burdge finished off the race with a 50-yard free split of 21.89 seconds.

Next, competing in the 1000 free for the first time in her career, Fanny Teijonsalo (Espoo, Finland/Makelanrinteen Lukio) won the event by nearly three and a half seconds as she touched the pads in 10:35.63. Teammate Gracie Redding (Orlando, Fla./FSU/The First Academy) finished third in 10:39.12.

Senior captain Sandra Wilk (Lexington, Ky./Paul Laurence Dunbar HS) and Cassidy Fry (Oakwood, Ohio/Oakwood HS) then finished first and second in the 200 free with times of 1:55.34 and 1:56.73, respectively, before Eble and Melissa Marinehiro (Davie, Fla./West Broward HS) touched first and third in the 50 free with times of 24.82 seconds and 25.77 seconds. Heading into the first break of the morning, the Eagles dominated the 200 IM as Elizabeth Zeiger (Cumberland, R.I./Homeschool), Shaw and Elizabeth Zubero (Fort Lauderdale, Fla./Westminster Academy) finished first, second and third in the event. Zeiger and Shaw were separated by only 0.15 seconds.

Coming out of the break, FGCU finished first and third in both the 100 fly and 100 back. Sommer Harris (Richmond, Va./St. Catherine’s School) defeated the field in the 100 fly by more than two seconds as she clocked a time of 56.93 seconds with Zubero touching third in 59.38 seconds. Gardner and Marinheiro then combined for 12 more points in the 100 back after touching in 59.89 seconds and 1:01.87, respectively.

Capping off the meet, the Green and Blue swept the podium in two of its final three races with two Eagles also finishing first and second in the 100 breast. Burdge, Yee Ching Wong (Hong Kong, China/Diocesan Girls’ School) and Eble touched the pads first, second and third in the 500 free, before Teijonsalo won the 100 breast – her second win of the day – by out touching Barbara Caraballo (Ponce, Puerto Rico/Indian River State/Newsome HS) in 1:04.75. To finish things off, the Eagles’ sophomore relay made up of Redding, Burdge, Hannah Wittman (Jupiter, Fla./Pittsburgh/Central Bucks East HS) and Sarah Ubele (Tyngsboro, Mass./Tyngsboro HS) gave the class its second relay win, this time in the 200 free, after touching the pads in 1:39.14 and finishing ahead of the junior and freshman relays.

UP NEXT
Following the holiday break, FGCU will return to action for a busy January that includes four dual meets starting with its third and final CCSA opponent of the season as Liberty comes to the FGCU Aquatics Center Saturday, Jan. 7 at 10 a.m.