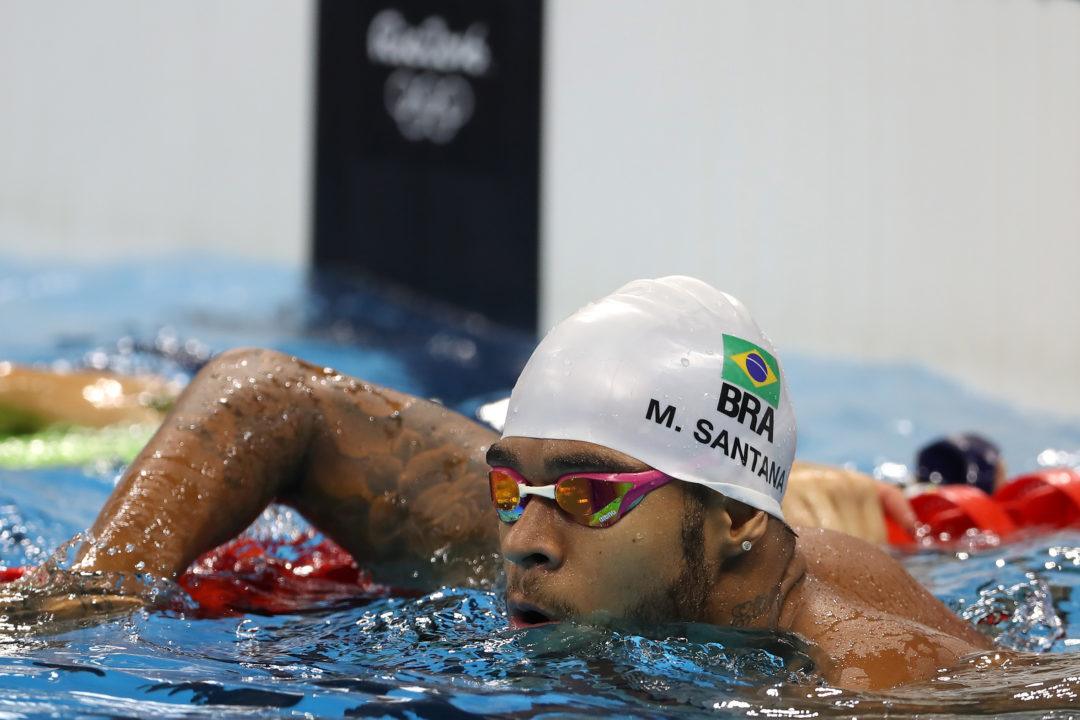 In breaking news coming out of Brazil, 20-year-old Pan American Games gold medalist Matheus Santana has decided to make the move to the United States to kick-off his next training quadrennial. The 20-year-old has been a member of Unisanta in his home nation, but visited the Charlotte, North Carolina-based SwimMAC Elite club earlier this month, simply looking for a new training base to change things up.

Santana tells SwimSwam exclusively that he plans on becoming a member of SwimMAC Elite in January and his decision was based both on the city’s attributes, as well as the club’s coach and his would-be teammates’ camaraderie and positive training environment.

“I like the city, it’s quiet and at the same time is big.  There are great swimmers there and I think it will help be daily,” Santana stated to SwimSwam.

Says Santana, “David is a great coach. He’s intelligent and he experiments. The staff is all good, I met everybody when I was there and they’re very nice people.”

The 2016 Olympian, who has suffered from diabetes since childhood, has been steadily moving up the Brazilian sprinting ranks since breaking legend Cesar Cielo’s 16-year-old age record in the men’s 100m freestyle event. In 2014, Santana clinched the World Junior Record and gold medal in the 100m free event while competing at the Youth Olympic Games. That year he also took gold in his signature event at the South American Games.

Santana scored a prelims swim on Brazil’s 4x100m freestyle relay at the 2015 Pan American Games in Toronto, where he earned gold by way of the Brazilian finalists finishing on top of the podium. Headed into 2016, Santana managed to register the 5th-fastest 100m freestyle time at his nation’s Olympic Trials, snagging him a relay spot on Brazil’s Rio roster. He competed in the prelims of the 4x100m free event at the Games, notching an anchor split of 49.0. He would be left off the final foursome, which settled for 5th place finish.

The young sprinter says he is ‘super excited’ to make the stateside move, so look for Santana at more U.S.-based meets during 2017.

I bet this has a little something to do with Ervin’s success.

Or Cesar’s success? When Cesar was on fire, he was swimming with David?

No…. Brett Hawke only trained him slightly. He trained with Albertino in 2009.

Only From September from December… I was there, buddy…
Beijing Games, Rome Worlds was all Brett Hawke.

I wouldn’t discount the diabetes in the regression. It was rough on Gary Hall, Jr., and his dad was a doctor who married a Keating with a load of money, so he had access to the best medical care.

Great move, loss some size and should be a force again after a rough season.

Two rough seasons.
In 2014, at just 18, Santana’s progression in the 100 free seemed unstoppable, and someone was looking at him as a likely medal pretender for Rio2016.
So, interesting move to SwimMAC.