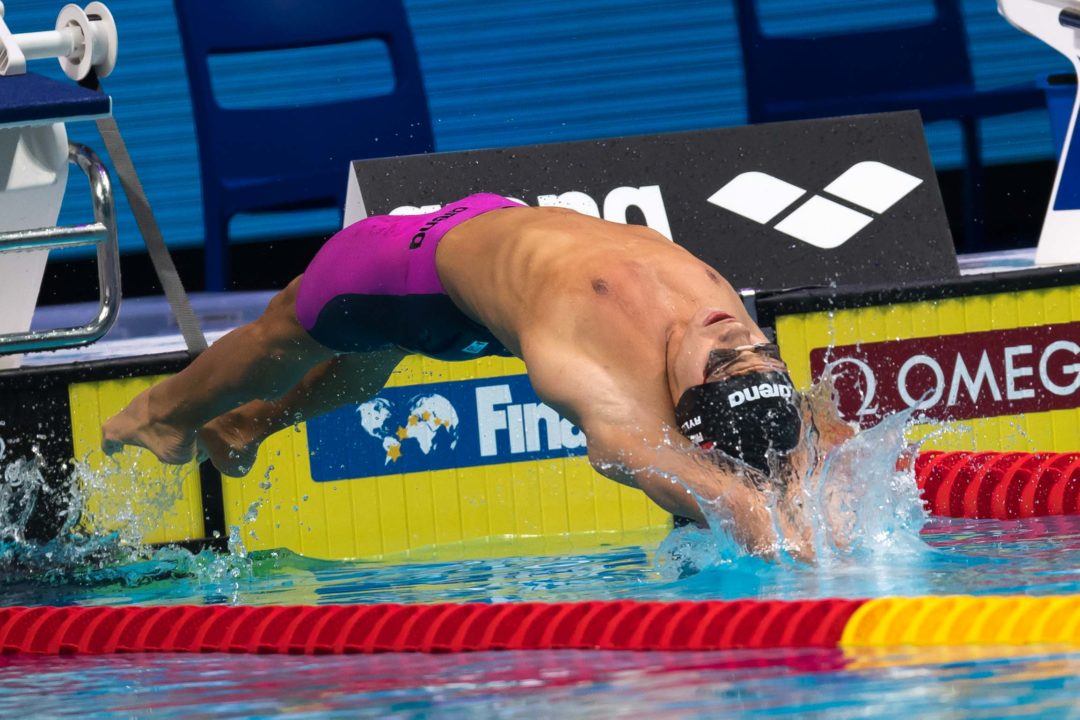 Russian Evgeny Rylov claimed 3 victories over the course of his campaign in Spain, including a new series record in the men's 50 backstroke. Archive photo via Mike Lewis/Ola Vista Photography

The Trofeu CN Sabadell took place over the weekend in Barcelona, but Spanish swimmers weren’t the only ones in the pool looking to get some racing under their belts. Russia’s Evgeny Rylov, Ireland’s Jack McMillan, and Denmark’s Katrine Villesen were among the foreign contingencies who descended upon Sabadell’s home pool of Can Llong.

For his part, Rylov claimed 3 victories over the course of his campaign in Spain, including a new series record in the men’s 50 backstroke. Clocking a time of 25.29, the Russian represented the only man of the field to log a sub-26 second result en route to capturing his fastest mark of the season. His time of 25.29 now checks Rylov in among the top 15 performers in the world thus far this season.

Rylov also reaped gold in the men’s 200m backstroke, stopping the clock at a time of 2:00.86. That’s a pedestrian time by the European Champion’s standards, as his best rests as the 1:53.36 he notched in Glasgow for gold. But, it was enough to get the job done here in Barcelona.

The men’s 100m backstroke saw Rylov compete in the prelim only, where he hit the wall in 57.13 and subsequently opted out of the final. The Russian then topped the men’s 100m freestyle final in 50.59, the 5th fastest time of his career, although it’s an event the 22-year-old rarely races.

McMillan came away with 2 golds on the competition, first taking the men’s 200m free in a time of 1:49.62. That outing represents just the 4th time Irishman has been under the 1:50 threshold, with this time falling just ..05 off of his personal best of 1:49.57 from last year’s European Junior Championships.

Winning the men’s 400m free was visiting Danish swimmer Alexander Norgaard, who beat the field in a gold medal-garnering time of 3:53.78, his fastest time ever.

It was Alex Castejon Ramirez who got the gold in the men’s 200m breaststroke, taking the top spot in a time of 2:15.14.

Spanish speedster Lidon Munoz wreaked havoc across several events, starting with the women’s 50m freestyle where she claimed a new series record. Clocking 25.78, Munoz represented the only sub-26 second swimmer of the field. Her personal best rests at the 25.06 from June of 2018.

National record holder Jessica Vall proved too much to handle in the women’s 50m breast, where the 30-year-old European Championships silver medalist notched 31.80 for the gold. Vall doubled up with a victory in the 100m breast, stopping the clock in 1:08.47.

For Denmark’s squad, Katrine Villesen nabbed gold in the 400m freestyle, hitting the wall in 4:12.27, crushing her previous personal best of 4:15.00 from last year. Villesen also came away with the win in the 400m IM, notching a time of 4:45.70 to collect another big PB. Her previous career-fastest entering this meet was the 4:48.17 produced in Vienna back in 2017.