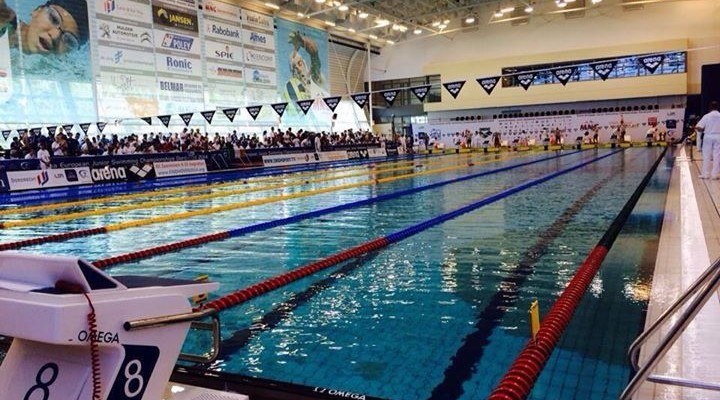 The Russian team continued its dominance on the medal stand on Day Three of the European Junior Championships in Dordrecht...

The final prep camp ahead of the Olympic Games was intended to be held in Japan but will now take place at home in Russia.

The Russian team continued its dominance on the medal stand on Day Three of the European Junior Championships in Dordrecht on Friday.

Tamas Kenderesi of Hungary opened Day Three of the meet by winning an exciting 200 fly by more than a body length. The crowd thought he had broken Andrew Seliskar’s 2013 World Junior Record of 1:56.42, but in the end he just missed. Still, his 1:56.74 was a great swim and earned him the title of European Junior Champion. Nils Liess of Switzerland finished second in 1:58.51, while Alexander Kunert of Germany touched third in 1:58.92.

Liess, who was seeded first after semifinals with 1:58.26, did a great job staying with Kenderesi through the 150 and even led the first half of the race, but no one could match Kenderesi’s 30.37 split over the final 50.

The outcome of the girls 200 breast wasn’t much of a surprise, given the spread of qualifying times out of semifinals. It was clear that Maria Astashkina of Russia, who qualified in 2:26.65, two seconds faster than her nearest competitor, would be a good bet for gold. She did win the race, clocking a 2:26.61 final time.

Third place went to Emma Cain of Great Britain with 2:29.17.

The 100 free might have been the most exciting final of the night. We knew it would be a good race because the top eight (nine, really, but only eight make finals) were so close together out of yesterday’s semifinal race. Two of them, Jan Holub from Poland and Damian Wierling of Germany, went even faster leading off their respective relays later that evening.

In tonight’s final, Holub and Kyle Stolk of Netherlands were both out in 23s. But it was all about the finish. Holub, Wierling, and Hungary’s Peter Holoda -in lanes 4, 3, and 5, respectively- were barreling down the center of the pool, virtually together 80 meters into the race. Holub had been out fastest but Wierling and Holoda were closing on him. In the end the challengers ran out of pool and Holub was crowned European Junior Champion with his 49.49. Wierling, who had an incredible back half, mistimed his finish and wound up second in 49.57. Holoda took third with 49.74.

Lithuania’s Povilas Strazdas buried the field on the butterfly, turning at 25.33. Gratz was a half-second behind him, the only other competitor under 26. Gratz made up a whole second on Strazdas in backstroke and took over the lead at the 100. The pair were about a second ahead of the next wave. Strazdas outsplit Gratz by about .5 on the breast and took over the lead going into the free. And that’s where everything changed.

Russian teammates Maria Kameneva and Daria K Ustinova had broken the championship record in successive heat during the semifinals earlier at the beginning of the evening session. Kameneva went 28.47 in heat 1, while a few minutes later Ustinova lowered the new mark to 28.42.

In finals, Ustinova shaved another .24 off the record, winning in 28.18. She just missed the 28.14 World Junior Record set by New Zealand’s Gabrielle Fa’Amausili at Junior Worlds last summer. Kameneva took second in 48.48, while Ema Sarar of Croatia was third with 29.18.

In a race where only .56 separated first from eighth, it almost could have been anyone atop the podium. But when all was said and done, it was Stanislau Pazdzeyeu of Belarus with the victory in 28.34. Poland’s Krzysztof Tokarski touched second in 28.57, a mere .03 ahead of Russia’s Anton Chupkov (28.60).

It was a thrilling two-person race through the 900 between Italy’s Simona Quadarella and Spain’s Laura Rodriguez Cao. Quadrella, who had won the 800 on the first night of the meet, started her descent ahead of Rodriguez and was able to maintain the distance between them until the end. She touched in 16:30.37 for the gold, her best time by 10 seconds. Rodriguez went 16:34.04, a whopping 25-second drop for the Spaniard. Third place went to Melinda Novoszath of Hungary, whose 16:42.65 was her best time by nearly 12 seconds.

Russia’s 400 medley relay team had almost won the race before it started. Daria K Ustinova took it out in a 1:00.25 backstroke and Maria Astashkina followed with 1:07.60 breast. Alexandra Chesnokova went 1:00.89 in fly, and Arina Openysheva came home in with a 56.90 free. Although both Germany and Italy had stronger second halves, it was impossible to catch Russia at that point.

In what’s sure to be an exciting 200 free final, Arina Openysheva and Daria Mullakaeva of Russia both qualified with 2:00s: Openysheva went 2:00.67 and Mullakaeva, 2:00.88. Just behind them were Africa Zamorano Sanz of Spain with 2:01.00 and Italy’s Rachele Ceracchi in 2:02.18. This might be the race of the day tomorrow.

Perhaps even more fun to watch than the girls 200 free tomorrow will be the girls 100 fly. The top three qualifiers are only separated by two-hundredths. Barbora Misendova of Slovakia and Amelia Clynes of Great Britain boty went 1:00.29 in semis, and Carmen Balbuena Heredia went 1:00.31. How’s that for close? In addition, three more were under 1:01 – Germany’s Lisa Katharina Hoepink (1:00.67), Sofia Iurasek of Italy (1:00.97), and Szonja Szokol of Hungary (1:00.99).

Germanys relays are really great until now, they finished at least second in every race, not even russia has this depth in their relays. The girls 100 fly final will really be tight, you should also notice that Lisa Höpink was by far the fastest girl in 100 fly in medley relay with 59.86. Balbuena was 1.00.12 and Clynes was 1.00.50

I wouldn’t read too much into that (the relay splits)… Hoepink had something to race for, the German’s were in medal contention. I’m not sure if Spain were, and Britain certainly weren’t after slow Back & Breast legs.

Also, the 200m Back qualifiers are wrong…. Only Semi Final 1 results are included, Semi Final 2 results haven’t yet been released/uploaded :s The top qualifiers were Christou (GRE), Greenbank (GBR) and Podguzov (RUS).

The times of the british and the spanish girl are actually not important, since i dont think that they could get anywhere near 59.86 anyway, i just wanted to say that hoepinks time was amazing. If she repeats that than she will at least win silver.

Why would you mention them if they were not Important? It seems pretty pointless. What was the RT of Hoepink?