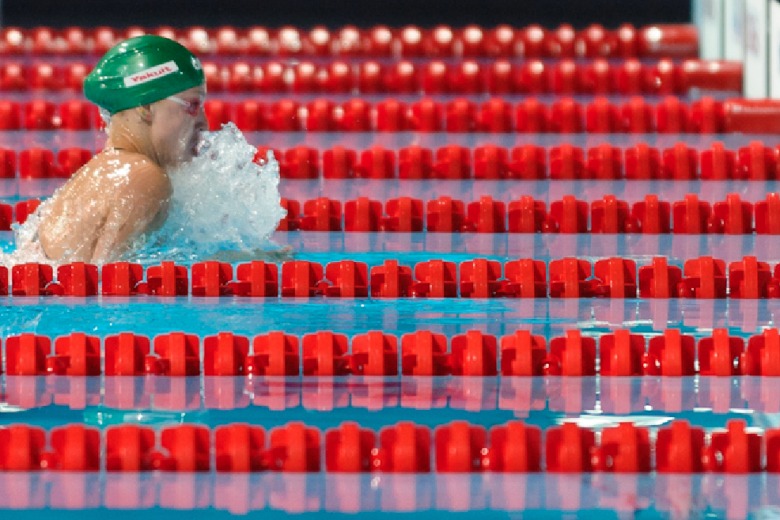 Coming into Barcelona Meilutyte lifetime best had been a 29.96 that she posted in June, which at the time was impressive and just over a month later it seems a bit pedestrian for her... (Photo Credit: Victor Puig)

Chad Le Clos of South Africa will be carrying his nation’s flag in the opening ceremonies of the postponed 2020 Olympic Games kicking off shortly in Tokyo.

Ruta Meilutyte had an amazing performance in the semi-final of the in the 100 breaststroke breaking American Jessica Hardy‘s 2009 world record of 1:04.45 posting a time of 1:04.35. Before the Lithuanian teenager could attack another of Hardy’s 2009 marks, Russian Yuliya Efimova beat her to it.

The morning after defeating Rikke Moeller-Pedersen of Denmark to become the world champion in the 200 breaststroke Efimova returned to the pool and became the third woman since January 1, 2010 to break 30 seconds in the 50 breaststroke posting a time of 29.78 breaking Hardy’s world record of 29.80.

Meilutyte and Efimova who went one, two in the 100 breaststroke were set up for a head to head in the middle of the pool in the second semi-final of the 50 breaststroke. Head to head may not be the right description because after the first 15 meters Efimova would not get past Meilutyte’s shoulders as the Lithuanian made swimming a 29.48 look effortless.

Coming into Barcelona Meilutyte lifetime best had been a 29.96 that she posted in June, which at the time  was impressive and just over a month later it seems a bit pedestrian for her.

Meilutyte knows how to win in major competitions, but in the past her most impressive times have been swum in the semis. Even with that said seeing what she has in her bag tricks for the final tomorrow will be a lot of fun.

Since then she has had a coaching change and a shift in focus away from the 100 freestyle and towards the 50 and 100 butterfly as well as the 50 freestyle.

That change in focused paid off in Barcelona on Saturday when Ottesen Gray won Denmark’s first gold medal of the competition, taking the 50 butterfly in a new Danish record of 25.24.

Okay, nice to see that Denmark, finally, got what belongs to them after their fantastic performances, i.e. a gold medal.

Ruta responded to Efimova’s WR, just as everyone expected! However, her victory is not carved in stone yet; just remember what happened in the Men’s 50m final. RMP executed a fast 50m breast as well. It’s good to see that her 2nd place hasn’t have a bad effect on her.

Morozov showed that he isn’t only a star of the short course pool. Well done, Vlad. Ledecky and Lotte were fast, just like everyone expected – no surprises. As Men’s 50m showed anything can happen also in the women’s 50m free final. The experience seems to play a major… Read more »

Hi. Would just like to point out that Alexis Santos broke the National Record in the Men’s 50m Backstroke with 25.78.