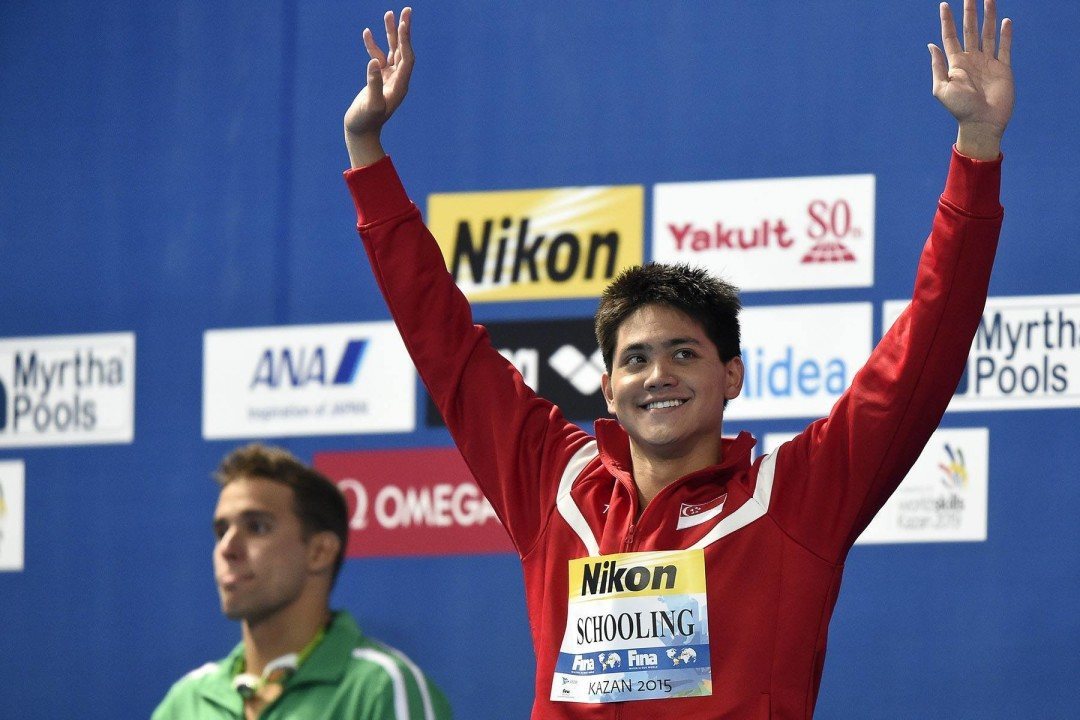 Joseph Schooling became Singapore's first Olympic medalist in swimming when he won the 100 fly at the 2016 Olympic Games in Rio.

Ties are not unhead of in swimming. The Rio Olympics had a few, including an historic tie for gold in the women’s 100 free and a tie for bronze in the women’s 100 back. Unlike track, which measures to the thousandths, ties happen.

However, a three way tie is still something really unique, rarely seen in electronically-scored meets.

But that’s exactly what happened in the men’s 100 fly. For the first time in the history of the Olympics, three men tied for a medal in a swimming event. What’s more, those men were three of the most prominent swimmers in history: Michael Phelps, Chad le Clos and Laszlo Cseh.

But arguably the bigger story here was the man who claimed gold: Joseph Schooling. In a stunning race, the 21-year-old Singaporean won his country’s first Olympic gold medal in any sport, defeating his childhood idol, Phelps, in the process.

However, Schooling wasted no time in defending his top seed. He had a great reaction time, leading the charge on the first 50. At the turn Phelps started to show his back-end speed, but Schooling held on, building his lead over the rest of the field.

This epic race was supposed to signal a passing of the torch: by beating Michael Phelps in his last Olympic race, Schooling established himself as a talented young swimmer, receiving national attention (and lucrative financial rewards) in Singapore for his performance.

However, he has since struggled to regain his 2016 form. He did win a medal in the 100 fly at the 2017 World Championships in Budapest, tying Britain’s James Guy for the bronze and matching his semifinal time in Rio of 50.83. But at the 2019 World Championships in Gwangju, he failed to advance out of the prelims, finishing over 2 seconds slower than his winning time in Rio.

According to Schooling’s coach, Sergio Lopez, Schooling has been trying to find his love for the sport again. Schooling returned to training with Lopez shortly before the coronavirus derailed sport for a time – Lopez was also his high school coach at The Bolles School. With an extra year to prepare for the Olympics, Schooling, who is entering his physical prime, could benefit from the extra opportunity to get back to form for 2021.

Less hot take: Schooling does not beat Dressel, but puts up his best time since Rio and ends up on the podium

not with milak and minakov around

I don’t even think he’ll final based on what I’ve seen since Rio. If he were to make it to the final and win a medal that would be a remarkable turnaround.

he has been pretty consistent since Kazan he is not a one trick pony
In fact, any of his WC performances would have gotten him gold in Rio

He got an Olympic Gold, he is one of 4 or 5 people in the World EVER to beat Phelps since 2008. He swims the 50 fly and the 100 free and the 200 free and 200 fly free and gets the gold medal in each on the Asian Games. So I wouldn’t call him a one trick pony but it’s not a scientific term.

He never won the gold at the Asian games in the 200 free, 100 free or 200 fly. Maybe the SEA games which is a long way from the Asian Games.

The one trick makes more sense when you havent got all the medal winning relay prospects…just focus on getting one gold in your best event….

Where is Ol’ Longhorn to take yet another jab at Dressel?

He likes his heroes to be one and done on the Olympic stage and to have never held a WR. 🙂

Is he really entering his physical prime? I gotta think that some of Eddie’s mid-D training probably put him into a way better shape than he ever has been and probably will be. I don’t have any idea how Lopez coaches.

The Murphy, Dressel, schooling, santo connection will live in infamy as the coolest high school relays ever looking back. Would be a good 30/30 on ESPN tracing their journey from young phenoms to international stars