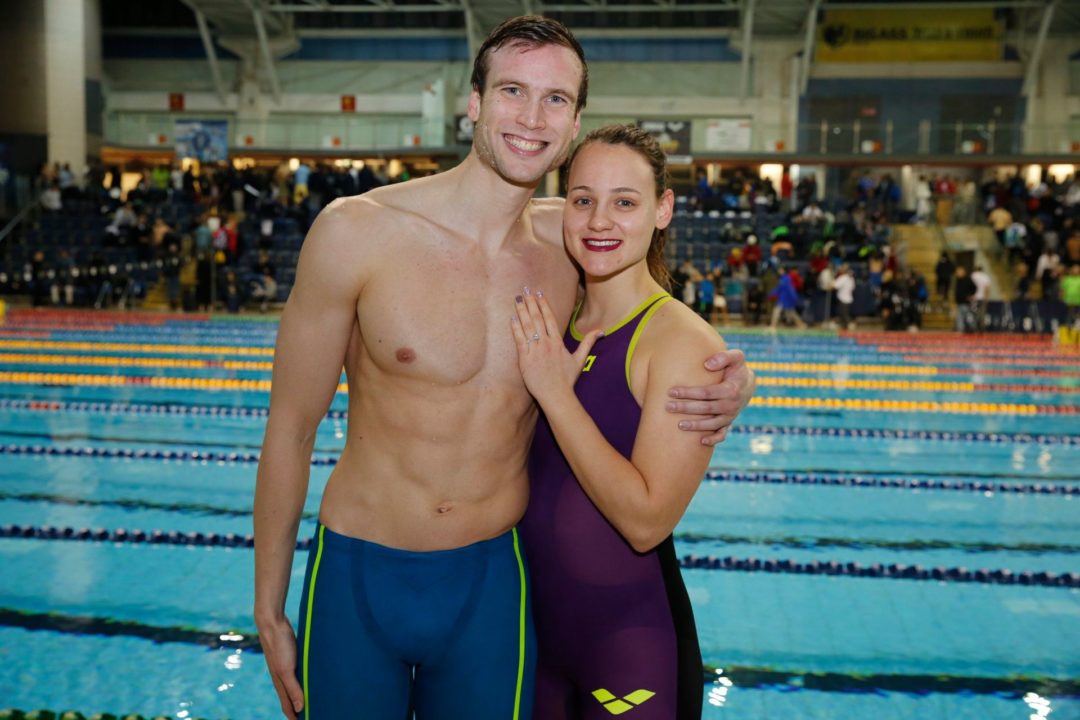 An incredible week at the Israeli SC Championships for Michal Liberman included two individual wins and an engagement to Aaron Greenberg. Current photo via Guy Yechiely

NETANYA, Israel — Michal Liberman triumphantly returned to the Israeli Short Course Meters National Championships in late December after a six-year absence, winning both the 100- and 50-meter butterfly events. And that was not even the most momentous occurrence during the competition for the Stony Brook women’s swimmer.

On the final day of the meet at the Wingate Institute in the Mediterranean resort city of Netanya in central Israel, boyfriend Aaron Greenberg proposed to Liberman. She accepted, and the couple now is engaged.

Greenberg, a former Yale swimmer, and Liberman had combined to set a national record as part of a 200-meter medley mix relay during the Israeli competition.

“He proposed between the prelims and finals session on the last day,” Liberman said. “So when I returned to the pool to swim the 50 fly, I was so happy and excited, it helped me swim fast and claim first place.”

Liberman had joined Stony Brook swimming this academic year as a graduate student with a final year of eligibility in large part because of Greenberg.

With the Seawolves, Liberman produced program and ECAC Winter Championships meet records in December with a time of 54.89 in the 100-yard butterfly.

Liberman had excelled competing in her native Israel as a teenager but had not qualified in recent years as her times slowed.  Her return after the lengthy absence proved remarkable.

About her only blemish came in the 50-meter backstroke, her signature event. Liberman was disqualified because of an early reaction time.

“I was terribly upset about it,” she said. “The 50 back is my strongest event, and I had very high expectations. I know I could have won. Yet it was an important lesson for me. I put too much stress on myself and lost focus.”

Additionally, Liberman was pleased with a fourth-place finish in the 100-meter backstroke — “my weakest event.” She produced a near-personal-best time of 1:03:02.

“It was awesome, because my boyfriend was on my team swimming the breaststroke, and we made a new national record together,” Liberman said.

Liberman returned to collegiate swimming this academic year after suffering a torn ACL in her left knee just before the start of the 2018-19 season as a senior at Eastern Michigan University.

The comeback from the serious knee injury made the Israeli nationals success even more gratifying.

“I had a very good meet,” Liberman said. “I proved that I am back from my time away being injured. I am even more excited now to carry on and finish the season even stronger at the conference championship. Many athletes and coaches from home were surprised by how well I was swimming and complimented me for my hard work.”

The opportunity with the Seawolves never would have materialized had Liberman not had a year of eligibility remaining after graduating from Eastern Michigan in May with a bachelor’s degree in communications and public relations.

Liberman tore the ACL in her left knee in a freak trampoline accident in September 2018. She initially tried to rehab and compete as a senior at Eastern Michigan, but the pain proved too severe and she ultimately underwent surgery last January.

Meanwhile, during that winter break, while her teammates traveled to Florida for training, Liberman had returned to her native Rosh Haayin, Israel, located about 25 minutes north of Tel Aviv. There, she met Greenberg, with whom she is now engaged and a national record holder together.

Raised in Israel and not intimately acquainted with NCAA rules, Liberman initially did not realize she could regain a final year of eligibility because she was unable to compete as a senior due to injury. Once she finally learned of her remaining eligibility, Greenberg told Liberman about his admiration for Smith.

Smith and Liberman hit it off and she ultimately enrolled at Stony Brook for graduate school this academic year.

“I really loved her,” Liberman said.

Liberman’s Seawolves career will continue through the remainder of this season, including the America East Championships Feb. 13-16 in Worcester, Mass. She plans to continue her academic pursuits at Stony Brook in 2020-21 while completing an MBA in marketing.