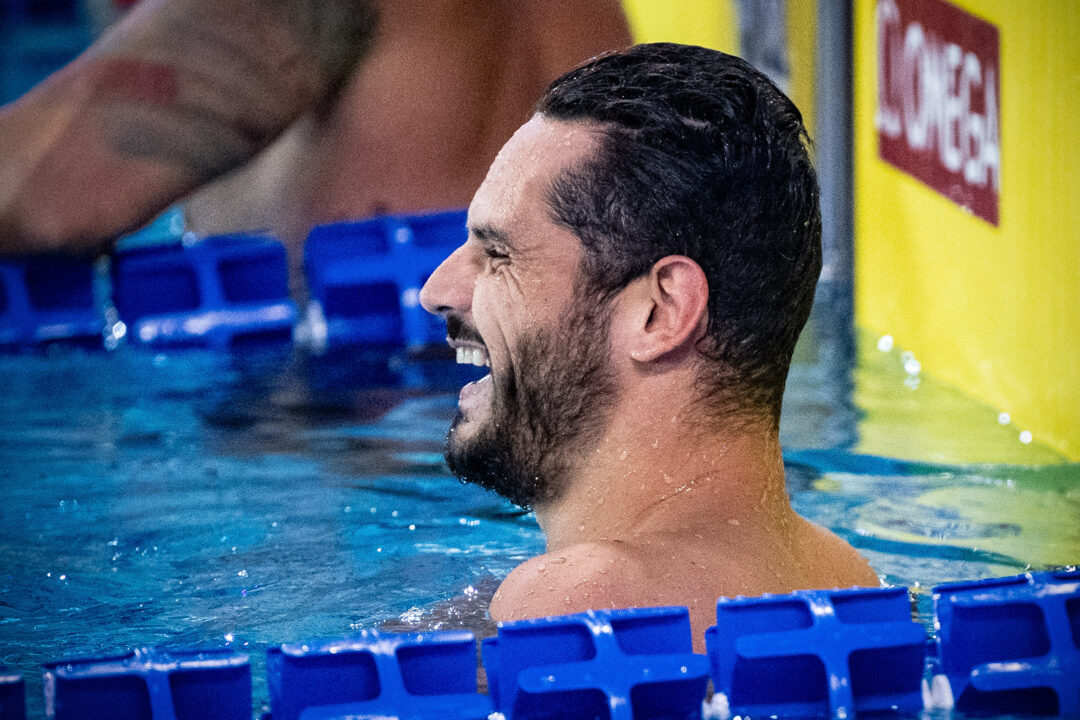 Florent Manaudou, a three-time Olympic medalist in the 50 free, has withdrawn from the Playoff round of the 2021 International Swimming League season. Archive photo via Giorgio Scala / Deepbluemedia / Insidefoto

While Manaudou was willing to confirm his absence, he declined to comment on why he was missing the team’s next three meets.

While Energy Standard originally announced a roster of 16 men and 15 women, reports are circulating that they, like many of the ISL’s teams, are going to be without several expected swimmers in Eindhoven. No other specific Energy Standard names have been confirmed for absences so far.

Manaudou was a late arrival to the ISL regular season, appearing in only Match #8 and Match #9 – Energy Standard’s last two – this season. In Match #8, he had relay-only duties for Energy Standard, scoring 8 MVP points, while in Match #9, he got a pair of individual swims as well. He finished 4th in the 50 free and 6th in the 50 fly, totalling 14 points.

That just scrapes the surface of his potential, however. Last season, he competed in just 3 of 4 regular season matches, and still ranked 27th in the league in scoring, pulling down 38 points/match. In the final, against the best teams in the league, he ranked 15th in MVP scoring.

Manaudou has medaled in the 50 free at three consecutive Olympic Games. In 2012, he won gold, and in 2016 he won silvers. He remains the World Record holder in the 50 backstroke in short course meters.

Last month, he announced that he would leave his longtime club CN Marseille to swim under a pair of young coaches, Quentin Coton and Yoris Granjean, at Antibes instead.

Operation create the most beautiful/talented child in history is in full swing folks, they’ve got to put in the dry land meters this winter

That really hurts. Obviously this hurts their sprinting and relays, but remember he has also been one of the best 100 IMers in the league too, though he didn’t swim it this season yet.

8
0
Reply
Chris
Reply to  JP input is too short

I think this hurts based on last season Manaudou. This season less so. Especially given Ben Proud is in better form to cover some of the sprints

Isn’t he in the middle of that Celebrity Hunting reality show with his sister?

According to his instagram I think you’re on point

Yeah you’re correct , that is the reason

But that was filmed in March. Unless they won, and have to join a reunion…